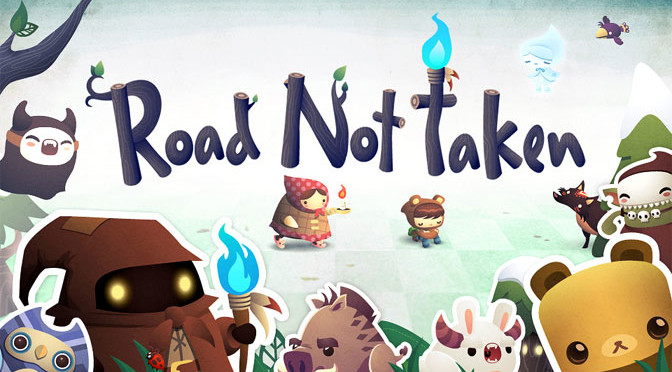 Road Not Taken by Spryfox at its core is a game of relationships, choice, and consequence. Everything at first glance appears straightforward and simple. From the sparsely populated village and it’s distinctly characterized villagers to the adjacent forest where most of the action takes place, but the secret success for this adventure-based puzzle game is the surprising depth of plot and scope of gameplay that pulls the user in shortly after the first level.

You play as a roguelike hooded figure, who after being attacked in the woods in an initial unplayable cut scene, gains power over an equally mysterious blue-flame staff.  A boat captain takes you into the nameless village once you reunite a small child with its mother in the instructional prelude level. The staff is your source of power and energy for the duration of the game. Wielding it allows you to levitate and throw objects around the forest to rescue each child, but levitating and carrying an object uses up energy to the point of exhaustion and game failure if you aren’t diligently conserving it.

Certain actions cost you one point of energy, such as moving an object around in the forest, while tossing something is free. The problem is that it’s not always possible to get into position to throw something for free without first moving something else. To open doors in the forest, you have to stack a certain number of identical items together, so you will be doing a lot of forest renovation. Lost children, finding them is the goal of every level, can be saved by tossing them into their parents. Energy is replaced by eating food or doing good things like rescuing children, but there is never enough. Lose all your energy and the game ends.

Rescuing village children from the depths of the puzzling forest serves as the gameplay paradigm. The more children you rescue, the better pay you get from the town mayor and the better you are able to develop relationships with the townspeople.

As your relationships with the townspeople grow they will give you better and better gifts in the form of charms or food. These charms along with unlockable trophy items affect the overall flow of the game by giving you more energy and more rewards but often with counterbalances built in, such as causing damage to be doubled or certain enemies in the game to be spawned sooner.

It is also important to note that each object in the forest can interact with one another to create both beneficial and harmful results. Take three harmful red spirits and throw them together and you get an axe, which is useful for building fires and cooking foods. Mix a bunny with a red spirit, though, and you get a demonic lagomorph straight out of Monty Python and The Holy Grail that will definitely try to kill you, a sense of humor that carries through the game in surprising ways. There will definitely be points in this game that you are scrambling to find a honey pot or roasted pig leg for fear of death while carrying shrubbery, and given the fact that you, the ranger, will only be able to make 15 trips into the forest means every action you take has an immediate and potentially devastating result.

The music for this game works wonderfully with the village and forest backdrop: sparse yet resonant, providing breadth to the art, which reminds me of a softer, less angular version of Genndy Tartakovsky (Samurai Jack, Dexter’s Laboratory, and Star Wars: Clone Wars).

Unfortunately, while I was playing the game froze several times and there seemed to be glitches involved with the ranger’s house. Also I figured out the hard way that you have to create save points within the game by giving rice to an alter within the forest, but this just adds to the puzzle nature of the game. Instead of getting a trophy you get a checkpoint, fair enough.

When I first started playing Road Not Taken, I thought that the puzzle solving nature would become repetitive and boring. Fortunately, the rich diversity of engaging and collectible objects within Road Not Taken allows for seemingly inexhaustible combinations of gameplay.  It earns a very respectable 4 GiN gems. Check it out and let me know what you think in the comments below.