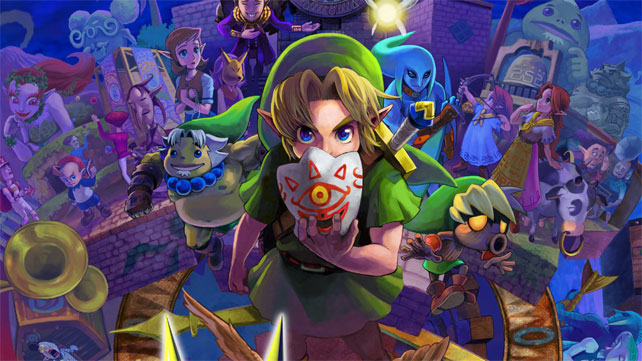 Alright! Let’s start this review of Nintendo’s The Legend of Zelda: Majora’s Mask 3D remake off by angering some fanboys. I played the original Majora’s Mask when I was a kid. Heck, I’ve still got my N64 cartridge of the game. Honestly, I didn’t like the game. However, I felt a second chance was in order for the remake.

The Legend of Zelda: Majora’s Mask 3D is a strange game in the Zelda lineup. Unlike most other games in the series, the triforce doesn’t matter, there’s no princess to save and it isn’t set in Hyrule. Instead, Majora’s Mask picks up after The Legend of Zelda Ocarina of Time as the child hero Link embarks on a journey to find a lost friend.

Link’s journey takes him into Termina, a world that’s preparing for a carnival all while a moon is preparing to crash down on them. Skull Kid is responsible for this terrible fate and Link has been recruited to stop him. However, he’s unable to do so because of Majora’s Mask, which is a powerful artifact from an ancient race. Instead, Link must travel through the same three days over and over again to beat four dungeons and prepare himself for the final showdown with Skull Kid.

The Legend of Zelda: Majora’s Mask 3D has a heavy focus on two things: masks and death. Throughout the game, Link is able to collect different masks to change him into a Goron, Deku or Zora. There’s a catch though. Each of these masks come from a dead person that has left Link their power to complete the tasks that they couldn’t while alive. It’s a strange focus for a Zelda game, but it actually works really well.

The Goron, Zora and Deku masks aren’t just simple skin switches. Instead, each of these three masks offer their own unique play style: the Deku masks allows Link to skip across water, do a spinning attack and shoot bubbles; the Goron mask give him a three hit combo attack, allows him to do a ground pound and also lets him curl into a ball and roll around at high speeds; the Zora masks offers quick transportation in water, the ability to use fins as boomerang and a protective aura.

Each of these masks have a dungeon that corresponds with them. The dungeons have unique puzzles around them that are designed around the masks, but sometimes players will also need to switch back to being just Link to get through an area. It helps spice up the typical Zelda gameplay and it works well.

Travelling back in time over and over again was one of my least favorite tasks in the game when I was a kid. However, it was necessary to beat the game and collect all the masks. One thing that never sat well with me was how hard it could be to juggle time and keep up with the events that took place over the three repeating days. The Legend of Zelda: Majora’s Mask 3D makes this much easier with the addition of the Bombers’ Notebook. This item helps players track NPC’s schedules and even allows them to set alarms to remind them when an event will take place. It’s easily the best change this remake has to offer.

The Legend of Zelda: Majora’s Mask 3D also have several other things that have changed from its original release. Almost all of the dungeons have been changed around (even if only in small ways) and most of the boss fights have been made easier. I’ve noticed Nintendo has been trying to make its games easier of late and it doesn’t sit well with me. This doesn’t mean that all of these changes are bad. Some of them take gameplay elements that didn’t work quite right in the original release and improve them.

The graphics in The Legend of Zelda: Majora’s Mask 3D are really solid. Nintendo gave this game the same treatment that they gave the Ocarina of Time remake and it shows. Gone are the jagged edges from the N64 era and instead players are treated to nice, smooth textures. I can’t really rule in on the 3D elements of the game. 3D always hurts my eyes and I’m not even able to see it half the time. I’m playing this on a normal 3DS. I’ll be picking up a New 3DS in the near future and I hope it solves my 3D issue like it did with Todd.

The Legend of Zelda: Majora’s Mask 3D sports some great audio. When I look back at it, the audio was probably my favorite things about the original Majora’s Mask (that and rolling around Termina with the Goron mask on). The audio is still great years later. Players of the original game are sure to find some tunes that will fill them with nostalgia and new players will discover that many of these songs will stick with them long after they’ve finished the game.

I may not have liked the original The Legend of Zelda: Majora’s Mask’s, but I love this remake. Nintendo has improved the game on so many levels that I actually found this to be a very enjoyable play. I’m not a fan of dumbing down the game as it takes away some of the challenge from the original. However, several of the changes that were implemented for this version of the game feel so natural that it makes me wonder why they weren’t there to begin with. The Legend of Zelda: Majora’s Mask 3D is a great trip for both old and new players.

The Legend of Zelda: Majora’s Mask 3D earns 4 GiN Gems out of 5!