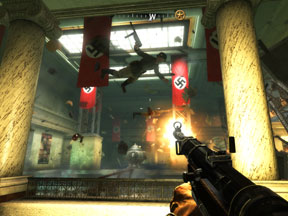 To think the first PC game I ever played was Wolfenstein 3D. Go figure, it was bundled with my first computer, and I was hooked. I never saw anything like it back in the day and didn’t realize back then that it would jump start a genre that is still going strong to this day.

But then again, maybe that’s why Wolfenstein was released again as a current generation title. After all it was B.J. Blazkowicz’s massacre of his Nazi foes that would bring gamers back for yet another round. But does Raven Software think that it can stand up to the current gauntlet of shooters that will soon be led by the almighty Modern Warfare 2?

While the last Wolfenstein game (appropriately titled Return to Castle Wolfenstein) could be considered a reboot, the latest game is a true sequel as it mentions the defeat of "Deathshead" and the fall of "Operation Resurrection." Right from the opening, we see B.J. Blazkowicz making an Indiana Smith style escape from a Nazi battleship after stealing a mysterious disc.

All of a sudden, B.J. is sent to the besieged town of Isenstadt where the Nazis are investigating an attempt to open a gateway to a demonic world called "The Veil," and harness a power known as "The Black Sun." With this power, the Third Reich would be deemed unstoppable.

The disc that B.J. uncovers is actually a gateway to that world, and while there, he can uncover secret doors and ladders that cannot be seen in the rest of the world. Along the course of the came, he uncovers special crystals that power up the Veil medallion, allowing him to slow down time, generate a magic shield to repel attacks, and even "empower" his weapons to increase their power and even penetrate enemy shields.

At first when playing Wolfenstein, you’ll notice the weapons are like the older games. There are two machine guns, one long range rifle, a flamethrower, and the WWII staple the Panzershreck. But there are also weapons that appear to be taken from science fiction. There’s a particle beam similar to the Proton Pack in Ghostbusters that disintegrates Nazi’s on contact, as well as an electrifying Tesla Gun, and a special "Veil powered" cannon that vaporizes anyone in a small radius.
All of these weapons can actually be upgraded via purchases at the Black Market, one of the three groups of safehouses found in Isenstadt. It is impossible to purchase all of the upgrades in the game in one sitting, but those that aren’t needed can be sold back to the Black Market for a lower price.

In addition to the Black Market, B.J. can visit the Golden Dawn, a mysterious organization dedicated to studying the mysterious forces the Nazis are investigating. He can get missions from them, but the main storyline comes from the missions that are found by visiting the Kreisau Circle safe house.

The Kreisau mission campaign can be finished in about seven hours on Don’t Hurt Me difficulty.

Aside from the included Veil mechanics, there’s really not much to talk about in the game. While Isenstadt makes the game more sandbox style in mission selection as opposed to being linear, there are times when I had trouble trying to locate where my next objective would be. The compass gets confusing, and I had to look at the map multiple times before reaching my destination. Perfect Dark Zero says the navigation in Wolfenstein is confusing! But the missions themselves are the usual objective based shooter. It’s done okay, but is nothing revolutionary.

Wolfenstein’s graphic engine is based on id Tech 4, the same engine that was used in Doom 3, Quake 4, and Prey. Most of the time it runs well, but it does have horrible cases of frame rate loss. It’s worst when jumping in and out of the Veil. For a technology that is borderline archaic, running this slow so late in the 360’s lifespan doesn’t make sense. After all, look at Prey and how smooth that ran, and that game is nearly 3 years old!

One thing I should mention is when playing a WWII themed game, the Nazis should mostly speak German. We’ve seen it in Medal of Honor, and we’ve seen it in Call of Duty (pre-Modern Warfare,) but why is it all the Nazis in Wolfenstein suddenly speak English? It hurt my opinion of the game in Return, and that carries over here. Even worse, the voice acting has the most stereotypical German voice acting I have ever heard. It almost sounds a bit too campy. Oh well, at least B.J.’s voice actor does a good job (even more so considering he NEVER spoke in the previous games.)

Wolfenstein’s multiplayer is also very basic compared to other shooters. There are only three game types: Team Deathmatch, Objective, or Stopwatch (Objective but being the faster team.) Players can only select from three classes: soldier, engineer, or medic. It’s a bit too simplistic, and even the addition of Veil powers isn’t enough to make it unique.

As a whole, Wolfenstein is just an "ok" shooter. It’s passable for a rental but not really worthy of a purchase. The story can be finished in at least seven hours, but it doesn’t look like the type of game that you will go back to, especially with the rudimentary multiplayer.