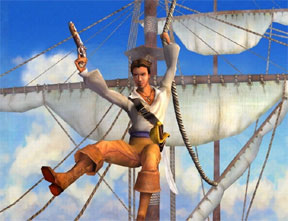 I love this job. I truly do. Ask me why"

Because a couple of years ago at a party I ended up sitting next to Sid Meier and got to quiz him about being a game designer and what he’s been up to and what he enjoyed best about it.

When I mentioned that the first of his games I’d played was ‘PIRATES!’ he only had one question for me: ‘What platform?’ When I told him it was a Commodore-64 he said ‘Man, we did a great job on that one.’

That’s why I love this job.

And Sid delivers again with the updating of PIRATES! This is great news. And not just for us old folks. The new PIRATES from Firaxis delivers all the greatness of the prior version while adding enhancements and twists that make it all fresh again.

Don’t get me wrong"this isn’t for the adrenalin fan. There’s no crazy wild ride here. There is, however, a great game that displays a ton of research and hard work and thoughtfulness in the design.

One plays as a young man with a family problem"they’ve been kidnapped by the Evil Marquis Montalban. You become a pirate as a means of finding them and gaining your revenge against your tormentor. Along the way you can choose to war on other countries or peacefully be a merchant or simply live the life of anarchy and attack everyone in site.

You’ll need to accumulate wealth and men to gather the clues you need to locate your family. In addition, side adventures will pop up that allow you to discover lost cities, treasure fleets, and other fantastic places. It’s great fun to discover an unprotected treasure fleet and well"OK, so it’s fun but not what anyone would call ‘nice.’ But it is fun.

Bring your dancing shoes because these girls don’t just fall for the uniform, buster. They want a man with rank, money and some sweet moves on the dance floor. I confess, this is the single most difficult thing for me to learn in the game. It’s not easy to get your timing down and the girlish laughter when you stumble is hard on the old pirate ego. More than once I sacked a town because the Governor’s daughter made fun of my dancing skills. Call it a character flaw.

Look, PIRATES is one of the landmark developments in the game industry. It, and the other games Sid made with Microprose in the 1980s (Pirates, Covert Action, Civilization, et al) effectively set the bar for the large-scale simulation game concept that still exists today. And this updating of PIRATES just adds to the legacy. Without bloody violence and with brains more than reflexes this is a game that demands the best of its players without causing them to sink into the mud that so many action games become.

I’m sure Sid is still proud of the C-64 version. And I feel certain he’ll be proud of this one in 10 years as well.

Yo Ho, Yo Ho, The Pirates Life for me!