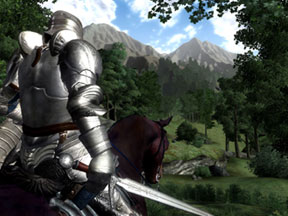 Wow. Where do I begin to describe how amazing Oblivion is? Should I talk about the eye-popping visuals and fully-3D world that is light years beyond anything anyone has ever seen on a computer? Should I talk about the depth of the plot that would rival a full-length feature film or even, gasp, a great literary work? Or should I talk about how darn smart the AI in the game is and how you can actually follow people around in their daily schedule as they go to their jobs, head over to the tavern for a drink with friends or turn in for the night after locking up their bedroom doors?

I suppose I should start from the beginning. Mostly I will be chatting about the PC version of this remarkable title, though below that Todd Hargosh will be giving his second take review after playing the game on the 360.

You start out in an imperial prison. I think Bethesda earns the "most detailed prison cell" award again this year. There are chains you can move, objects to pickup and of course realistic dim lighting all around. Granted, you are going to need some big iron hardware to run the game properly on the PC. We had no troubles with our test system, but it is a 3Ghz monster with 1G RAM and a Radeon 850 graphics card. If you tone down some of the settings, you can probably run it on a more modest system. Every now and then, like when a trap was springing, even our system showed a little jumpiness in the frames, but these were few and far between.

Before you really get into the game you create your character. There are numerous options to choose from to make them look different from everyone else in the world. It’s kind of like a MMORPG in that respect even though you are playing alone in this world. Watching your chosen characters eyes blink is a bit eerie since they appear to be so real. The only real problem I have at this point is that I think the noses are a bit too large, and even the oldest characters seems to have young looking necks, but these are minor grips in a nearly perfect system.

Surprisingly, you don’t choose your starting class at this point. What you will quickly learn is that your adventure while you escape from the imperial prison is actually a tutorial level designed to see how you solve various problems. Do you sneak past a goblin? Do you charge forward and bash his brains out? Do you hide in the shadows and try to assassinate him with an arrow? All your choices come together at the end of the level, when you are assigned your class based on your actions and how you probably want to play the game. You can accept the game’s suggestion, pick another character type or even make a unique class. This is the most unique way to make a character I have ever experienced. And the computer was pretty darn close to the character class I wanted to play.

Once you get out of the prison, you are dumped on the outskirts of the Imperial City in a wooded area near a lake and some abandoned ruins. The game tells you that you can follow the main quest, head into town to buy and sell items or pretty much head in any direction to find adventure. The game world is huge, and adventure really is scattered everywhere in caves, villages, ancient ruins, abandoned forts and even in the woods.

Not one to bypass crumbling buildings, I swam across a small lake to the island with the nearby ruins. I promptly engaged in an archery duel with some bandits and found a door into a huge underground complex. Besides bandits, I also found secret areas with undead zombies that appeared to be feeding on the bandits as there was a dead one lying across an altar. Eventually I found a rare statue that I knew I could sell for a lot of gold.

I told that last story to show how the plots in the game are intricately intertwined. As an example, after I sold the statue, the next day a servant contacted me and asked me to follow him to his master’s house. Once I got there an eccentric rich person hired me to find more of those statues for him. That’s pretty neat that a seemingly unimportant action like looting a ruin can lead to new quests.

The same thing happened with the assassin’s guild. I ended up killing an "innocent" person and the guild noticed. The next time I slept, a representative of them came by and asked me to join them.

The AI is extremely detailed. In one mission I was supposed to follow a shopkeeper to see if he was doing anything shady. I waited outside his store for a long time, until it got dark. After that I saw him lock up his shop and head over to the local inn for that district. Amazingly, he showed up there along with a lot of other merchants tired from their jobs that day. They bought food and drink at the bar and sat down to enjoy their meals. As they did, some of them talked to one another and because I could overhear them, new quest topics were added to my journal. Again, everything seems expertly intertwined.

Like in Morrowind, you can follow the main quest or go off on any number of side jobs including faction quests like joining the fighters or thieves guild or just help out the odd person who needs something. Often one seemingly unimportant quest will lead to several others or even an epic one.

No matter where you go in the world, it is going to be beautiful. The landscape is breathtaking and features realistic weather from pretty snowstorms in the far north to blisteringly scary thunderstorms in the south. The sound of course matches the graphics and that includes a beautiful soundtrack as well as realistic effects like hearing arrows whistle slightly as they sail through the air towards their targets. Also, most top level monsters in the game level with your character, so they will always be challenging without being overwhelming.

In summary, Oblivion is by far the greatest RPG ever created and I would add, likely the best game to date ever made in any category. I’m not normally such a fanboy, but playing Oblivion kind of makes me feel like you would if you were playing your Sega Genesis one day and then slept for five years to find an Xbox 360 on your desk. The games would seem impossible within your frame of reference. That is how Oblivion feels. I don’t know how they created such a good-looking, highly detailed world. All I know is that nobody else has done anything even close to this before and I don’t know anything in development that could even touch it. I know this is early in the year, but I know I have my vote for Game of the Year already. Oblivion will be a huge hit on the PC and especially the title-starved 360. And if other companies don’t take note and step up their game, they might have a gamer-revolution on their hands.

Despite some minor flaws and an occasional crash to the desktop, Oblivion earns a perfect 5 GiN Gems. If I could give them six, I would. And now without further delay, here is Todd Hargosh’s second take. Let’s see if he agrees with me, since he almost never does.

Ok, it has been 20 hours since I started playing Oblivion, and in that time I have broken out of prison, located the Emperor’s heir, destroyed two Oblivion gates, joined both the Fighter’s Guild and Thieves’ Guild, as well as the Blades, contracted vampirism, and have since discovered a cure. All this, and I’m still only at Level 4?

Despite the slow leveling up of my character, I have never been more engrossed in a title like I have with Oblivion. And this is coming from someone who usually doesn’t like role playing games?

After all, I am the same person who has in the past made harsh comments about the Final Fantasy series. Ok I will admit, I did like Final Fantasy X a bit, but still nightmares of Sephiroth and that darn Super Nova attack still haunt me at night. And if only I can go back in time and yell out "SEPHIROTH KILLS AERIS!" in the same manner that the Harry Potter spoiler yelled out "Snape kills Dumbledore" to a bunch of losers in front of a bookstore. But I digress. The fact is that Oblivion is not just a role playing game, it’s a religious experience!

Now while our esteemed editor went into the details about how great the PC version is, the Xbox 360 version is no slouch either. How Bethesda Softworks was able to squeeze such a massive project onto Microsoft’s new superconsole is an amazing feat in itself. Sure there is lots of popup when on the main world, and the framerate suffers at times, but we can only dream of a constant 60 frames per second environment. And just like any typical first person shooter, the control scheme fits quite well on the Xbox 360 controller.

Picking locks is a blast. Using the left analog stick to lift up the tumblers, you can actually get a feel for the lock and time when to trip it. Combat is also easy to get in with the feel of a first person shooter. It is a little tricky to navigate through all the menus, and the hotkey system could use a little work, but all in all the controls are as good as they can be.

Oblivion’s production is also top notch. Be it the gorgeous worlds, the impressive NPC AI, the musical score, or the top notch voice acting (including roles by Patrick Stewart, Sean Bean, Lynda Carter, and Terrence Stamp,) the four years of effort have obviously paid off.

Some bugs are present in the 360 version, most notably a few infinite gold exploits. I’m sure that these issues are also in the PC version, and will eventually be fixed in a patch, but I don’t know if these issues will be addressed on the 360.

In the last month alone, we have experienced many titles that show off the power of the Xbox 360. Fight Night Round 3 centered on its lifelike boxers and amazing skin physics, and Ghost Recon: Advanced Warfighter was the first game to truly be next gen, but Oblivion takes the term "next gen" to a whole new level. I may have just liked Morrowind when I played it on the original Xbox, but I love Oblivion!

Final Grade for me: A Perfect 5 Gems!

Editor’s Note: Looks like they finally agreed on something. And that, if nothing else, means you too should rush out and buy this game.