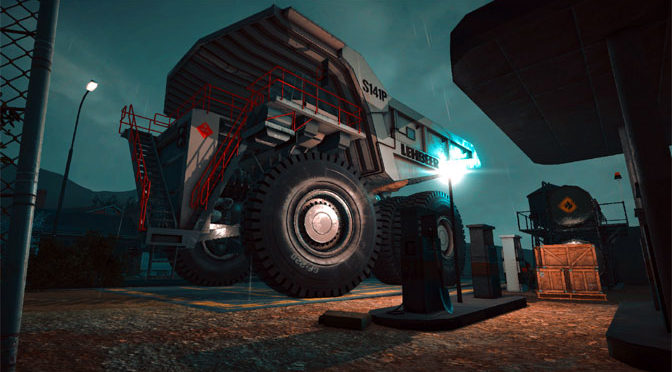 Simulators have been around as long as video games, as a result there is a simulator for just about everything. However just like most video games, not all sims are made alike and Giant Machines 2017 is definitely has a few challenges, at least when looked at as a fun experience. Now I will preface this by saying since this is a simulator, if you are interested in operating extremely large machines this game will probably work for you, however I will be looking at this from a critical stand point as a game for the average gamer.

The biggest way I can describe Giant Machines 2017 for me was boring. The game mostly consists of driving from place to place, extremely slowly, then fixing something or turning it on and operating it. Now as far as simulators go, it carries the same attention to detail, however this is quickly derailed by a number of issues. One the game is noticeably buggy; from the invisible walls that ALWAYS snag your vehicle, to things simply not working, to objective sensors failing to register you, the already tedious gameplay becomes more mind numbingly arduous.

Alongside that what does work is less than user friendly. Most vehicles operate terribly moving both insultingly slow while somehow being nearly uncontrollable. You will frequently find yourself either holding down the move button while hanging your head in boredom, or pulling your hair out as you careen your vehicle into a nearby invisible wall impeding any progress you’d like to make. I became so bored with this game I actually started throwing my vehicles into the most dangerous positions just for the sake of entertainment, which interestingly enough there is an achievement for finding all the ways to kill yourself.

Now I will note that if you do like the concept of operating big machines this game will probably scratch that itch. The machines themselves are designed with great detail, and I do admit to learning a few things, not that I will ever use them, but I learned them all the same. Still, it was kind of fun to be able to control some really heavy equipment without having to worry about angry bosses, collateral damage or breaking things, including my vehicle.

Graphically this isn’t impressive beyond the expertly detailed vehicles. But there really isn’t much else to bat an eye at. Things look like they should and nothing is really special by any means, it is worth noting due to the fact that the area you are put into is continuous and active, it may be straining on hardware despite the game’s less than top level graphics.

Sound wise it is a tale of two designs; on one hand the machines sound legit and very much like you would expect them to. On the other hand, the generic music and radio in this game is so bad that it actually damaged my experience. I mean that completely, the music in this game which plays through the radio in all your vehicles is so generic and poorly done you can’t help but laugh at how bad it is. If you are going to play this game grab some headphones and mute the radio because it will not add to your experience.

At the end of the day Giant Machines 2017 is a game which will really only be marketed for a select group of people. Those who aren’t interested in giant vehicles won’t want to play this game for both the subject matter and the tedium. Those who are interested may find the game a good experience for learning. If you are simply trying to find a new simulator I can’t say this one should be at the top of your list, sitting at $19.99 on Steam, there really isn’t enough to justify a 20-dollar price tag unless this is something you truly care about.