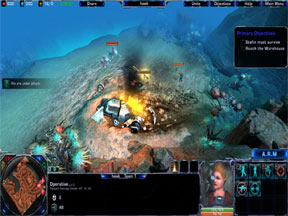 Strategy is a genre I’ve always enjoyed playing. When Tryst was introduced to me, I was curious to see what this game had in store. I’ve played all different sorts of strategy games from medieval to futuristic, but I have to say that Tryst really stood out.

From the very first moment I started tinkering with the mechanics I had a moment of nostalgia. Tryst reminded me of a more alien version of the Command and Conquer series than anything else. Of course this had me worried, seeing as how I’m pretty bad at Command and Conquer. Tryst is still being tested by the way, but played well enough that we decided to give it a full review.

Okay, now as I was saying, I never was good at Command and Conquer, and Tryst only reinforced this. My first battle lasted a whole five minutes. With great precision, I planned my buildings and researched technology. My miscalculation was not having a sufficient ground force. So the enemy took advantage of me having all my defenses on paper.

At first I saw a blip, and then before I could respond I was swarmed by the ugly alien creatures. Dazed, I stared at the game over screen. Over the few minutes that followed I tried my hardest to rationalize my loss as ‘character building.’ After a few more failed attempts I had to step outside and calm my nerves.

Tryst is a highly difficult game. It requires quick actions and even quicker thinking. Lucky for the average player, this is made much easier with the simple controls. Once you get the hang of that and the buildings, the game goes from impossible to just challenging.

I eventually got used to the human units and structures and became pretty proficient. One thing about this game I love is the ability to have multiplayer battles against other humans. Of course when I was able to review this game, it wasn’t released to the public so I couldn’t test my skill against other people. But the computer AI was a challenge to be sure. When you beat it, you will really feel like you accomplished something, which you will have done.

Graphically, Tryst is beautiful. The units look great and the landscapes are breathtaking. Everything also has a perfect sci-fi feel, so in that respect, it’s pretty perfect in terms of appealing to what is probably going to be its core of hardcore fans.

The music and sound effects in this game are amazing too. Both enhance the science fiction atmosphere and really complete the gaming experience.

All in all, Tryst is a great title. It’s available on Steam as a download, and should be picked up by all strategy fans, especially ones who prefer real-time elements over turn-based ones. With great elements and functioning controls, this game separates itself from the run of the mill strategy titles out there, and has a really cool sci-fi feel that I know many of you will love.