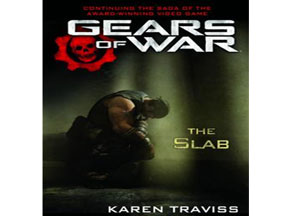 Gears of War: The Slab

What would a prison be like in a world, which during a civil war, came under attack by not one, but two sets of inhuman creatures? Karen Travis, the lead writer on ‘Gears of War 3,’ has written a novel set in the same universe but not in the normal settings of the game.

In ‘The Slab,’ the back-story for Marcus Fenix is finally fleshed out and we see the conditions that led to his facial scar and his tortured psyche. Marcus, the lead soldier, or ‘Gear,’ in the series, comes across as a noble man who is placed in ignoble settings and situations.

He is imprisoned for leaving his post to rescue his father, Adam Fenix, the genius weapon maker, scientist-savior, and keeper of a secret that almost destroyed all of humanity on the world of Sera. Interestingly Adam, the one who makes the most kaleidoscopic choices, comes across as less conflicted than his son or their realpolitik leader Chairman Richard Prescott.

As fans of the series know, Richard Prescott constantly engages in near apocalyptic decisions. This novel lets one see how he makes these choices and still stays sane. In the game, he gives speeches and puts the Gears into predicaments with less than all the information. In the novel, the reasons for this subterfuge and the strain it puts on him are explained.

Prescott’s anger at Adam Fenix for not revealing information about monsters below the surface of Sera is channeled into manipulating the scientist into making another weapon. But this manipulation comes after being deceived by the scientist. They are the one group of people Prescott cannot easily read.

Prescott says to Fenix, ‘When will you people ever grow up? I can factor in greed or malice but not naivety.’ That the insightful politician Prescott is put off guard by this quality is understandable. Naivety is in short supply in the ‘Gears of War’ universe. Prescott’s famous speech in ‘Gears of War 2’ is not a rosy view of the future. ‘Humans are no strangers to war. After all, we’ve been fighting for as long as we can remember. War is all we know.’

This novel reads like a mash up of a prison break story and Thucydides ‘Peloponnesian War.’ Some of the characters are involved in the small personal dynamics of prison life while others must determine the course of armies and populations. It makes for grim reading some of the time, but this is based on Gears of War, not a Mario game.

Happily, the continuing love story between Marcus and the very capable Anya Stroud is part of this book. That and the friendship of the Gears give some hope to the otherwise terrible state of affairs for the people of Sera. The author, who spent some time in the military, has rendered characters that seem believable in the super sci-fi setting of this world ravaged by monsters. It’s a must read for Gears of War fans as well as fans of post-apocalyptic science fiction in general.