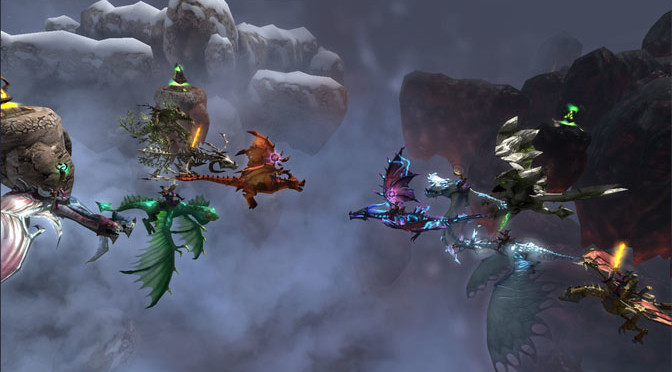 Upon finding out about Dragons and Titans I just had to try it. Free to play MMORPG’s like Dragons and Titans have recently taken a major step up from where they used to be. The graphics are far better and entail more detail, the sounds are more complex and realistic, and the gameplay has improved from basic point and click to a MMO with a storyline.

When I say the graphics are far better I am in reference to the detail used in the game. There are things you can now see that you would have never known about before. The graphics on this game have gotten to the point that what would have seemed like a mountain before is now a visible cave opening. The terrain around you now moves compared to the older games in which the terrain was just colored to look like grass…etc.

In Dragons and Titans your main goal is to free your Titan. However, your titan is conveniently located on the other side of a dragon-filled, turret-covered battlefield. It has proven itself to be both an entertaining and challenging mission.

To complete the goal mentioned above you must get your dragon to the other side of the battlefield. You start the game already set with a starter dragon, and to make it better, the tutorial of the game is pretty straight forward, allowing the player to learn quickly thus allowing quick access to the rest of the game.

Of course, if you don’t feel like playing alone, you always have the multiplayer option. Built just like the single player option, the goal is to free your titan. Only this time you now have other players both aiding you and attempting to prevent your success. The difficulty level is based upon two things, who you’re up against and what they have in their arsenal. Their weaponry plays a large part in how they can affect your progress toward the goal mentioned above as it determines how effective it will be against you.

Speaking of effectiveness, you will also want to pay great attention to the dragon you choose for the mission at hand as this can play a great role in how you do. For example, if you’re going into a scenario where you have to protect something or someone, you will want to use a “defense” dragon, which usually have higher defense levels but a slower attack. On the same token, if you’re going into a scenario that involves a lot of battles you will want a smaller, faster dragon with a higher attack rating.

As an added bonus, even while playing alone, you still have an available chat section, which comes very well in handy if you have any questions about the game or just want to chat with other players.

But the thing that really caught my eye was the interesting level progression system. Not only can you rank yourself up, but you can also upgrade your dragon as well. It’s also fun how you upgrade your dragons. You can either finish quests and things of that nature in the adventure mode option or you can acquire more than one of the same dragon.

I must add that if you are playing on a moderate level laptop or desktop, this game may not be the best choice as the graphic levels cause unwanted lag. This is due to the graphics card being unable to handle the high level of detail in the game, therefore causing it to lag as the PC tries to keep up.

Also, if you’re indecisive you may have trouble here. There are simply a lot of choices on how to grow and how to fight. But that’s a good problem to have. Dragons and Titans earns 4.5 GiN Gems overall for offering a fun and unique experience without a hefty price tag.