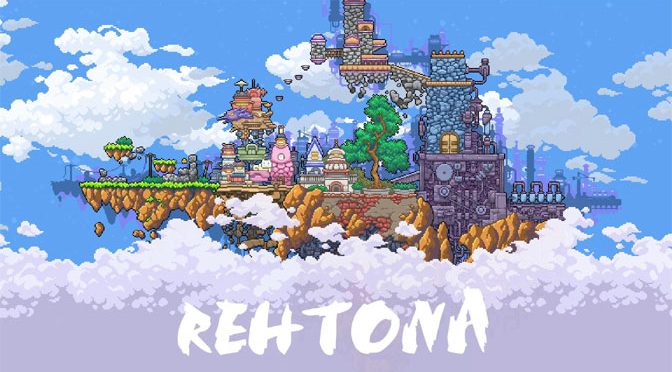 Have you ever left your panda house to go to the market, only to discover that everyone in the world has disappeared? No? Hasn’t happened to me either, but that’s the story of the puzzle platforming game, Rehtona. Mysterious disappearances and doors to another world appear before her. Rehtona will have to travel through two strangely similar worlds while guided by a girl who looks an awful lot like her- all to find the puzzle pieces that will restore her lost memories. So is Rehtona worth your cash, or is this Another memory better left forgotten? Let’s find out. 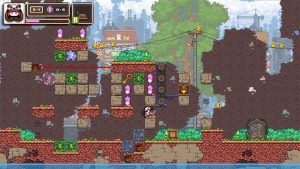 Rehtona is a puzzle platformer, as mentioned previously, and has a very cute retro aesthetic, reminiscent of 16 bit games from years ago. Rehtona heavily deals with moving block puzzles – moving blocks to cover lasers so you can safely cross, using blocks that summon other blocks from the sky in multiple ways, such as destroying fragile blocks or giving yourself a platform, that sort of thing. Rehtona can also create afterimages of herself in the light world which turn into solid statues in the dark world. Finding the proper spots to use these abilities, which can be used a limited number of times per level, is paramount in completing every single stage in the game. 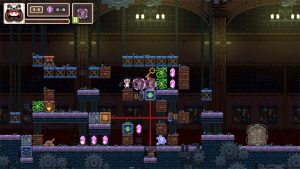 Stages in Rehtona start off in roughly the same way: Rehtona herself will be dropped off by her giant, wooden eagle friend on one side of the level and then vanish, and your goal is to find the puzzle piece that allows him to return to your aid. In order to get the puzzle piece, players will need to obtain a key that will let you enter a door into a dark alternate dimension (so step 1 is get the key, and don’t push any blocks into pits that you may need later while trying to get the key). Each new world introduces a new mechanic, like blocks that need to be destroyed with the impact of a falling block, weird anti-gravity areas, or mechanical platforms you can operate with switches. Sometimes, getting the puzzle piece is the easiest part of a level, while getting back to the wooden eagle in order to exit the level is tough because you blocked yourself in. Thankfully, for moments like these, pressing Y will take back your last move while R restarts the whole level if need be. Rehtona also features full controller support, for those wondering, and this entire game was played using a Nintendo Switch Pro controller. 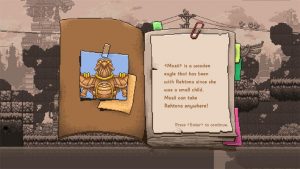 For the most part, the puzzles are pretty ingenious in Rehtona. The tutorial puzzles could be completed in mere minutes, but puzzles afterwards can leave you stumped for 20 minutes or more. Rehtona has five worlds, each with six to seven levels each, and apparently some people can get stuck for up to 22 hours or more while others can beat the whole game in five hours or less. For the purpose of this review, the game was completed in about four hours, including completing the final level again in order to get the normal ending. Final puzzles will actually be quite reasonable head scratchers that will involve making incremental progress while keeping sight of the larger goal. They’re quite inventive, in that fashion. The introduction of new mechanics in each world also helps keep the experience fresh, especially the batches of mechanical platforms you can independently operate with up to nine switches. 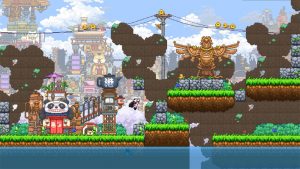 The graphics in Rehtona are pretty pleasing – the pixel work is actually quite cute, and most everything in the game can be understood quickly by looking at it. It’s not anything ground-breaking or something to write home about, but it all works. Sound is a mixed bag. The music is fine, for the most part, even though the loops aren’t that long so you’ll hear songs repeat constantly if you’re stuck on a puzzle for any length of time, but the jumping sound effect is quite loud in relation to the music. There are no options to change the volume for sound effects – it’s either on, or off. Normally this wouldn’t be so bad, but the jumping sound is extremely harsh and loud for an action that you’re going to be doing so often in the game. 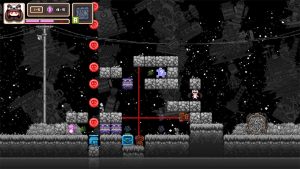 Overall, Rehtona is quite an adorable little puzzle game. The experience doesn’t overstay its welcome, and the longevity of the game is entirely how long certain puzzles may catch you unaware, but the game eschews quantity for quality. The visuals work, the music is fine even if the sound effects can be grating with how often you hear them. 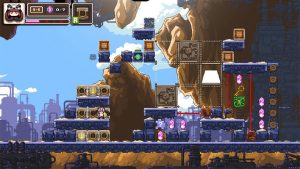 If you don’t like block puzzles, or don’t like multi-dimensional puzzles that will require you navigate a light world, a dark world, where boxes go, and when and where to use your afterimages, then Rehtona may not be your cup of tea. However, should you like puzzlers, Rehtona will be a great game to spend a brief, but enjoyable, amount of time with as all of the puzzles make sense and further build on previously established rules as you go along.