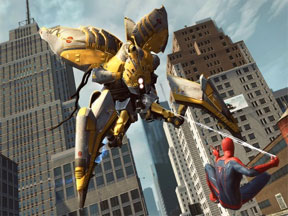 It seems like only yesterday when I was sitting around playing Spider-man on the Nintendo 64. Back then the games had a comic book feel to them. How things change in the span of ten or so years.

It’s safe to say that Spider-man has had its ups and downs in the game industry. Some of the Spider-man games were pretty good. Some were awesome. Some were total crap. The same can probably be said for the Spider-man movies, which is why they decided to reboot the entire series, giving it more of a Batman dark and gritty feel with the latest blockbuster. So it makes sense that The Amazing Spider-Man game would follow suit, if nothing else to compete with the likes of Arkham City.

And yes, I think they were successful, starting with the graphical presentation. When I loaded up The Amazing Spider-man I was blown away by the visuals. If a game has better graphics on the market today, I want to see it. Just the opening cut scene was probably the best one I’ve witnessed in the past couple years. Then when you are given free roam of the city, and can swing realistically from building to building, or just freefall, it’s a pretty amazing ride. And that is before you really get to do anything.

The game opens up on Peter Parker (from his perspective) as he is with a girl named Gwen inside of Oscorp. As the two of them are walking through the lab they see giant robots and crossbreeds. Crossbreeds are what Oscorp made by infusing human DNA into animals. With the great graphics the crossbreeds look just like they did in the comics. This is pretty much like the new movie too.

Of course all hell breaks loose when one of the crossbreeds reacts to Peter and breaks from it’s container. The ensuing chaos brought me to my first taste of gameplay. Peter changed clothes to his Spider-man uniform and picked up Gwen. My first mission was to take her the quarantine zone.

I was instantly impressed with the fast paced and fluid gameplay. There were no dysfunctional controls or horrendously clunky mechanics. Learning the new web rush feature was quick and simple, and I used it without a single hassle.

After the training mission, the world really opened up. The size of the map is nothing short of astonishing. I spent hours swinging around and taking care of petty crimes and secret labs. Secret labs are always interesting, because a frontal attack on them is suicide. So instead you get to use your sneak attacks on them. It’s almost like Splinter Cell, Spider-man edition.

One aspect I loved about this game is that in addition to getting rid of your adversaries via stealth, you can use a more brute force approach. When I first started fighting, I had low expectations. But fighting in this game is absolutely stellar. Just when I thought I’d seen all the possible moves, a new one would pop out of nowhere. The enemies are pretty smart too, and varied. So expect a challenge.

But boss battles in this game really keep the awesome streak going. Each one is different, and is just as acrobatic and creative as the normal fighting between standard enemies. Every boss battle was different, and always was entertaining.

Audio was fantastic and hilarious. Listening to the sarcastic rants of Spider-man made the game funny in addition to action packed. Music was flawless and the sound effects are second to none.