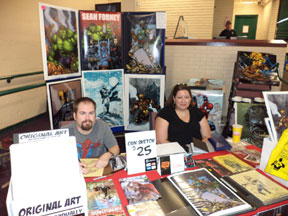 While hanging out at small comic shop in my hometown of Newark, Ohio I found an advertisement for a comic convention in northeast Ohio. Thanks to our chief editor John and the head of the convention, I was able to attend as a reporter. With the world’s largest smile I drove two hours from Newark to Akron and found the community center where it was held. That began my grand adventures at the Akron-Canton Comic Convention.

Compared to the conventions many of my comrades have covered over on the East Coast, this one was much smaller. However, as in most fistfights, size doesn’t matter. The Akron-Canton convention was packed with many cool booths and lots of amazing people.

One of which was Chris Yambar, who wrote some of The Simpsons comics among other things. Chris was great to talk to, from not only a writer’s standpoint, but from a Simpsons fan as well. On a more local scale, there was artist Sean Forney. He was so nice and even offered to autograph some of his artwork, including the Scarlet Huntress comic for which he is widely known. Both Forney and Yambar were huge draws at the show.

As with any convention, there were a fair amount of people in costumes. I got to converse with The Penguin and Wonder Woman among others. Overall though, I was surprised I didn’t see more people in full comic attire. Still, the ones who showed up were really dazzling. Check out my photo section to see for yourself. And both The Penguin and Wonder Woman were well-versed in their character’s lore, a nice touch.

When I got done digging through the massive amount of comics and other merchandise in the vendor room, I went to talk with Jeff Harper, the master of ceremonies and the ringleader of this growing circus. Jeff started this convention over twenty years ago. He told me the story about how there used to be quite a few comic shows in the area, but that none of them were very good. So he decided to organize one of his own, and it’s been a huge success.

In fact, the convention has recently been getting bigger and bigger, and for good reason. The atmosphere can best be described as relaxed yet dedicated. Everyone in the area seemed to really appreciate the fact that a convention of this level of quality was making its home in the medium sized cities of Akron and Canton. People from out of the area are coming in as well, such as Firefly & Wisp Publishing, dealers who made their first visit to the con this year. They seemed to be doing a hearty trade in the dealer room.

The Akron-Canton Comic Convention was much different than the one I attended in Marietta, Ohio a few months ago. I visited that one, which shall remain nameless, and talked with my fellow GiN colleagues Billy and Alia. Not only was it hot, but the venue had no air conditioning. In Akron there was air conditioning to keep everyone cool and really nice facilities all around. In fact, between the high level of organization, the high-level of attendance, the well-stocked dealer room and the great folks who attended the show, it’s one I would highly recommend.

In fact, next year if you are even remotely close to the buckeye state, then clear your calendar to go to the Akron-Canton Comic Con. With it being a single day event, it’s easy to hit all the action. The only thing that will make it better is once it grows a little bit larger. If you want to help make it bigger by showing up yourself, you can more info about it on Jeff Harper’s Website.

You might even get to hang out with the GiN Gang next year, as I plan to try and drag a few more GiNners along for the ride.