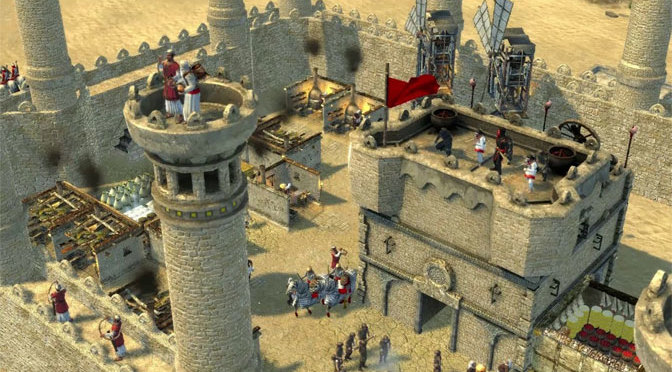 Alright, everyone! It’s time for another history lesson. Yet again I’ve been tasked with taking on a new entry in a game series that I’ve never touched before. It’s a game in a series that editor John Breeden has been playing for a while now. I’m starting to think John’s trying to get me into all the same games that he enjoys. I’m actually really cool with this as I’ve been introduced to several series that are new to me. This time I experienced Stronghold Crusader 2.

Stronghold Crusader 2 is a real-time strategy game that puts players in control of a lord during the crusades. Either side of the forces involved in the crusades can be played, and there’s a lot of variety for players to  experience.

Players start off almost every mission in Stronghold Crusader 2 by getting a strong economy built up. This includes adding houses, farms, quarries and other similar structures. All of these buildings will provide players with resources that they need to build up a city. This isn’t as simple as just setting up buildings. Citizens have to be happy and appropriate amounts of rations and taxes are needed to do so. It makes for an interesting challenge just getting a city set up.

The main goal of creating a strong economy in Stronghold Crusader 2 is to prepare for war. Players will have to set up barracks to train soldiers and different types of smiths to create weapons. Training soldiers costs money and the more soldiers there are the more food is needed to feed them. This has players managing their city and army together to get the best results.

Another really awesome feature of Stronghold Crusader 2 is castle building. Players are given a lot of freedom when it comes to building castles. I’m a defensive player and enjoyed setting up towers with archers along my walls to help keep my city safe. I also like setting up multiple checkpoints for entry into the city. My logic being that one destroyed gate can set my city back a good bit, unless there are multiple ones. Then an enemy can break against the wall and not hurt my city one bit, even if they do break through the gate.

While defense was my main strategy, Stronghold Crusader 2 will force players to use different tactics to win matches. I’ve had cases where I spent very little time on my city and instead focused on building up an army as fast as possible to blitz the enemy with.

Stronghold Crusader 2 has over 30 missions for players to complete. Some of these are tutorial levels, which were a blessing to a new player like me. After these tutorials, there are some really challenging missions that are sure to have players scratching their heads. Even if these missions aren’t enough, players can also create custom skirmish matches against AI and other players online.

If I had to take a guess, I’d say players will spend the majority of their time on custom skirmishes. I’ve played several RTS games in the past and it always seems to be the go-to game mode. I remember spending a lot of time on skirmishes in Command & Conquer Red Alert 2 (this was my introduction to the RTS genre) and I’m planning to spend a lot of time with them in Stronghold Crusader 2.

The graphics in Stronghold Crusader 2 are really solid. Every soldier can be seen in battle and its easy to find a single troop in a jumbled mess of units. The environments are nice and I was glad to see that there were a lot of small details hidden in the buildings even when viewed from above. I did run into a few graphical glitches from time to time, but they weren’t anything major.

The audio may be one of my favorite parts of Stronghold Crusader 2. Sure, the game had nice music and sound effects, but it was the voice acting that really got me. I loved listening to all the different interactions from soldiers. The grunts were especially fun to listen to as they would constantly complain about their jobs in a sarcastic manner. Missions also end with strange sayings from your adviser. Most of the time these made no sense to me, but they still gave me a good chuckle.

I’ve also got to give a shout out to FireFly Studios for the immense amount of support I received when trying to play the game. I was lucky enough to be a one in a million case where the game wouldn’t run on my computer. However, after a series of emails back and forth, the issue with my game was discovered and I was able to sit down and enjoy Stronghold Crusader 2. I think it’s great when developers go out of their way to help players like this and it definitely deserves recognition.

Overall, Stronghold Crusader 2 is a great RTS game that fans of the genre will enjoy. It’s not for everyone and some of the complexities of the game could be lost on those new to the genre. However, an excellent series of tutorials definitely help alleviate this. There’s a lot of content to be had and online matches make a great addition. Players will also be able to enjoy great graphics and some very entertaining audio.

Stronghold Crusader 2 battles its way to 4 GiN Gems out of 5!