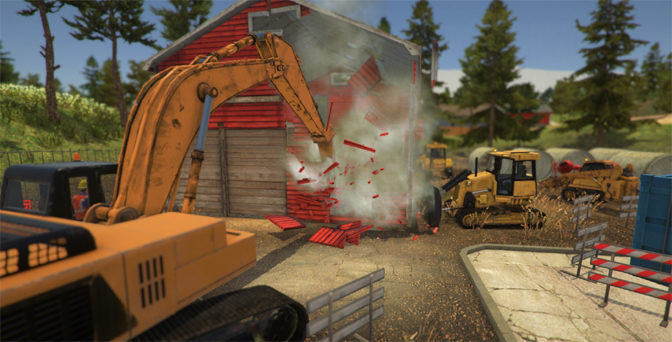 Demolish & Build 2017 is an interesting take on the Simulation genre: Many simulation games make it their utmost effort to include the most purposefully obtuse controls, in which much of the difficulty is in remembering overly specific keybindings or by using control schemes that are just overtly hard to use (see: Surgeon Simulator). Demolish & Build 2017 is a bit of a hybrid that includes many casual action elements into the game and includes a variety of sequential goals for the player to complete, as opposed to the open sandbox of games like Farming Simulator.

If you’ve ever wanted to own your own construction business, but you don’t want to stop browsing Reddit to do so, then Demolish & Build 2017 may just be the game for you.

Simulation games are a bit of a strange beast. There are a plethora of expectations that are stapled to the back of each of these games, which typically tends to make each one more indecipherable to the casual gamer than the last. Sim games with building elements are definitely not a new experience, but destroying structures, at least at the level to which this game allows, is something that the genre isn’t exactly known for at the moment. In Demolish & Build 2017, you take on the role of a construction company owner, and you drive your truck from one mission to another across a town, leveling up and purchasing new equipment as you go.

For the most part, the early game of Demolish & Build 2017 will consist of destroying buildings, removing trash from a site, or filling in holes in the ground in order to get a site ready for construction, of which the actual building is a simple point-and-click affair (usually occurring upon completion of objectives); there is no Minecraft level of construction in this game. As you complete missions, you earn money which can be spent on new machinery which can open up new types of jobs, such as transporting cargo, operating a wrecking ball, or using explosive charges. The game is focused quite soundly on the destruction elements, but Demolish 2017 was probably too simple of a title for the developer’s taste.

The controls of Demolish & Build 2017 are a little on the fussy side- there’s always a handy key onscreen to inform you of what actions you can take, but sometimes the buttons you press don’t always produce the intended result. Varying issues with the controls and, presumably, physics engine result in a variety of strange glitches such as an amusing one where excavator jumping off of the ground every time you try to move the arm of the vehicle. Of course, there are also frustrating ones, such as when certain buttons caused the excavator to seize and fly straight up into the air. The controls, when they do what they are supposed to, are a little more complex in such an arcade-inspired game than what some would expect, but it is largely limited to switching between drive and stationary modes in vehicles. In comparison to other simulation games on Steam, the controls in Demolish & Build 2017 are actually quite simple.

The graphics look overly simplistic for most objects in the environment: While the vehicles themselves are exquisitely detailed, the buildings and other objects that you destroy for each mission are represented in a dearth of detail. Players should have no trouble determining what each object is anyway, but low graphical fidelity is somewhat unusual for the genre which makes it warrant a mention. The physics engine is reasonably accurate for a Unity game, but it is also extremely buggy- objects get stuck, float in midair (sometimes causing issues with completing the mission as the game won’t register the building as fallen), objects may also fly into the air like they’re that one song everyone remembers from 1996’s film Space Jam. The point is: When the physics engine works, it’s great to watch and enjoy.

Overall, Demolish & Build 2017 is a great simulation game with enough arcade elements attached to make it more accessible for those unversed in the simulation genre. There are tons of glitches, though many of them will likely be patched out or can be resolved by getting out of the vehicle and re-summoning the vehicle- unless you are in mid-air in your magical flying excavator, because then you become one with the sky and need to reload the game entirely.

If you are a player that expects a game on the same level as Farming Simulator, then simply do not buy Demolish & Build as that is not what this game aims to be. Fans who enjoy the theme or the goal-oriented style of progression could definitely have some laid-back fun with this game, as it is extremely entertaining so long as you’re not misdirected into looking for an open-ended sandbox experience.