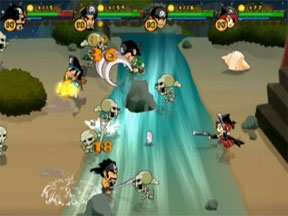 Every once in a while you need a game that’s nothing more than a game. No real story, no real depth. Sometimes a game can just be running across a level kicking the crap out of things and collecting stuff like coins, weapons or outfits. And if you’re looking for a game such as this, then Majesco’s Pirates Plund-arrr could be right up your alley.

Pirate Plund-arrr is a side-scrolling game for the Wii that ignores all the hype about the Wii-remote’s amazing features and reverts it back to a simple controller. No swinging the remote around or aiming at objects on your television. Instead, you use the D-pad and buttons for simple maneuvers and easy gameplay.

The best thing about the title is that it allows up to four players to play on a single screen, which is great as a way to get a room of multiple players in on the action.

As a title for children, Pirates Plund-arr does well to provide a range of interesting levels, player avatars, XP points and other searchable content to keep kids entertained for quite some time.

After these extras are discovered, however, the game really loses all purpose-other than being something to share with other gamers.

There is quite a bit of personality that tries to shine through with the game, such as the option to switch from a title menu’s language from "English" to "Pirate," and an ever-progressing love story between two skeletons. When was the last time that a language option included "Pirate." This would be a perfect title for Talk Like A Pirate Day each year.

And because one suspects that the developers of the game had some fun while making the title, Pirates Plund-arrr rises in gameplay as a result.

Despite these advantages, however, the title has several short comings, as well. The repetitive soundtrack gets mind-numbing after a few levels of gameplay and the various attacks tend to harp on the same motions despite a long list of differing weapons and techniques.

And while some might claim the graphics aren’t as top notch as other games that have passed through the Wii, I would say that the range of differences and design overhauls the characters and settings take is enough to garner a pass for its simple illustrations.

And besides, the art does well to mesh with the game’s theme nicely.

As a four-player beat ’em up, a Wii gamer would be hard pressed to find a better title to spend their money on. So while it may not have an engaging story, Pirates Plund-arrr provides enough distraction and enough reachable goals to keep you from caring too much.

It’s a pretty good kid’s title overall and earns 4 GiN Gems for its treasury. And it was able to earn that without plundarrring it from someone else. It got it all on it’s own.