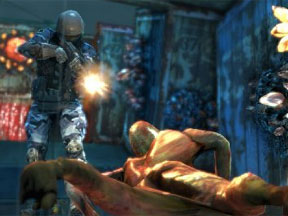 Bioshock might have set the mold of adding psionic powers to the first person shooter, but both games in that series left me disappointed with the bad endings. Even so, it spawned other shooters out that take the concept of adding special abilities to your guns and runs with it. Raven’s Singularity is one of them.

Singularity takes place both in 1955 and 2010. While Josef Stalin wants to advance nuclear technology in the USSR as a counter to the US dropping the bomb, a team of scientists discover a new element commonly known as E99. Research of E99 progresses on a facility known as Katorga-12.

However, in 1955 something goes wrong and an accident occurs. The Soviet government disavows any knowledge of Katorga-12, making it their equivalent of Area 51.

Flash forward to 2010, when a military team investigates the area near Katorga-12 after a communications satellite attack, but another power surge sends the chopper down. The lead character, CPT Ranko, investigates the facility, but is transported back to 1955 right at the heart of the accident.

In 1955, Ranko ends up saving the life of who would eventually become the game’s antagonist, Nikolai Demichev. But when returning back to 2010, he finds the island has changed and is swarming with mutations. Seems the now living Demichev has taken over the Soviet Union using the E99 based mutations. After killing Ranko’s partner, he is about to kill Ranko, but is stopped by operatives from a covert group known as MIR-12. They rescue Ranko and provide him the information of how to stop Demichev.

Ranko returns to 1955 and saves the life of the scientist responsible for the E99 discovery: Dr. Victor Barisov. Thus, when returning back to 2010, Ranko meets with the now living Barisov who tells Ranko the only way to stop what happened is to head towards a facility known as the "Singularity," head back to 1955, and destroy it with an E99 bomb.

As a result, Ranko is fitting with a special weapon of Barisov’s creation, the Time Manipulation Device, or TMD. In addition to opening time portals, the TMD is capable of aging both items and people, create time-freezing disruptions, and even alter the environment to its condition of both time periods.

It’s a nice addition to what would otherwise be a standard fare first person shooter. And just like Bioshock requiring ADAM to boost physical and psionic abilities, both weapons and TMD enhancements require packs of E99 that are found all over Katorga-12. The TMD based puzzles also provide a little challenge, but nothing too frustrating.

The time travel storyline is also done quite well. It does show all the events of what happened when changing the 1955 setting without any gaping flaws. Voice acting is quite well done too, even though the Demichev 2010 soldiers really need to learn some new lines of dialogue. I swear there were times when they repeated the same line over and over again forever.

The single player game lasts about 10 hours, and can end with one of three different endings. Thus it will be open for multiple playthroughs just to see how they turn out. At least compared to the endings of Bioshock, the endings of Singularity all are quite good and do establish a feeling of closure to the game. No "your character dies of cancer" junk that we’ve seen before.

Singularity is an impressive summer joyride through time, and a must for anyone who likes stories about the Cold War and Terminator style time travel.

However, for those who really want to play the game, I recommend going on Youtube and checking out the fictional "MIR-12" propaganda videos prior to playing, as it really helps delve you into the story.