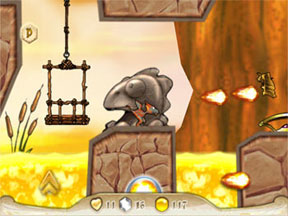 Pep the Dragon is a charming 2D run-and-jump platform game for iOS. The storyline of the game is simple. Pep must save his friend Josy, a cute little unicorn, from the evil clutches of the warlock, Pholon.

The game moves quickly through several stages. The controls work smoothly, so once you map a stage getting through it isn’t too difficult. Early stages are pretty simple to get players accustomed to the controls and then they get more difficult.

As Pep moves through the stages there are various items to blow to bits with his fire breath blasts. Chests found throughout the game contain treasure and glowing globes that improve his health. Several creatures attempt to hurt Pep as he tries to save Josy, but they can be dispatched with his fiery breath. If Pep falls into Lava or gets stung by a bee or attacked by cannons or bears too many times he will die and float away to heaven with a little halo over his head.

On his quest to save Josy, he can find new magical spells to enhance his abilities. There is also treasure to collect. He can even acquire a magical guardian!

If you’re a fan of 2D platformers this little charmer is a must have for iOS. The music is snappy. The cartoon graphics are good and the little dragon is very cute and earnest.

Word on the street is that upgrades are coming that will allow gamers to play as Josy the Unicorn and that there will be additional spells to learn.

The only drawback to this game is that, as with a lot of iPad games, the iPad gets heavy to hold and maneuver after awhile. So, although it’s nice to play on the big screen, it’s more comfortable to play on my iPhone.

Go forth and purchase gamers. This little dragon is a keeper.