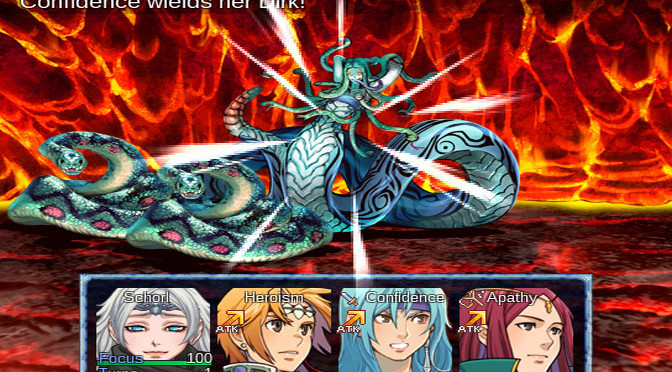 Ever wonder what it would be like to exist in a world where you’re the only human left alive? The developers of Pale Echoes wondered the same thing and it resulted in a spiffy little RPG.

The story of Pale Echoes picks up years after an event called the End. It’s unknown what exactly happened, but something caused the destruction of the world. Everything is gone and the only two living creatures that remain are the human Schorl and the Saerii (think fairy) Spinel.

Schorl and Spinel aren’t alone in the world. There are also creatures called Echoes. These are the memories of people that died when the End occurred and have refused to move on. There are also the more powerful Dark Echoes, which draw normal Echoes to them and distort the Aer of the world. Aer is what all of existence is made of an manipulating it is called Aerweaving.

Schorl and Spinel have made it their job to revitalize the world after the event that lead to its destruction. To do this, they must defeat Dark Echoes and use the Aer in the nearby vicinity to restore that part of the planet to life. They can’t bring the dead back to life, but restoring the world makes them feel better and gives them a sense of purpose in this dead world.

To fight the Echoes and Dark Echoes that inhabit this dead world, Schorl and Spinel use the memories of people that had distinct personalities when they died. These memories are also called Pale Echoes. Players recruit Pale Echoes to their party by travelling to a world of memories from right before the End. This is done through Spinel’s Aerweaving and special abilities.

Depending on how players interact with Echoes and Dark Echoes in combat will affect what they are weak to. If the enemy becomes Provoked, they turn red and are weak to Balanced attacks and resistant to Bewildering attacks. Erratic enemies are green and are weak to Bold attacks and won’t take much damage from Balanced attacks. Enemies that take on a Composed stance will be weak to Bewildering attacks, but will shrug odd Bold attacks. It’s basically a rock-paper-scissors system with added Neutral attacks that aren’t good or bad against anything.

The Link abilities mentioned earlier can provide benefits in combat. These abilities include being able to restore Schorl’s Focus, made Schrol’s next attack more powerful or increase the attacks of all the other Pale Echoes that have been materialized that turn. Using these abilities at the right time can completely change the outcome of a battle.

When fighting Echoes, Schorl can materialize her own Pale Echoes for combat. Each Pale Echo can only be materialized once per battle and three must be materialized every turn, unless the player doesn’t have three memories available. This limits the number of turns that players have to defeat their enemies. Also, if an enemy drops Schorl’s focus down to zero, she won’t be able to concentrate and the battle will be lost.

This unique battle system really turns combat into one giant puzzle. Players can’t just bust through all their enemies with sheer power and will really have to think about not only their next turn, but the entirety of the battle, if they want to win. The player will lose battles. That’s a fact. However, this doesn’t result in death. These Echoes and Dark Echoes can’t actually hurt the player. This means its easy to jump right back into a fight without worrying about restarting from a previous save.

There’s also no leveling up in Pale Echoes. Instead, some of the memories that are collected are just plain better than others. Despite not having a leveling system, there are side areas in the game. Completing these areas will unlock new moves for Schorl in combat and can make the game easier.

Traveling between the world of memories and the real world can be difficult. At times like these, players must chose to sacrifice one of their Pale Echoes to move forward. This really adds to the puzzle element of the game. Players will often have to look over their collected memories to determine which ones are the most valuable to them.

Adventuring through the world of memories also offers players insight into what caused the End. Different collected Pale Echoes will talk about it and there are Lexicon entries that can be collected that also shed some lore on the world. Collecting all of the memories and Lexicon entries also unlocks a special area that is the true end of the game. Luckily, there’s a New Game+ mode that allows players to go through the game without having to sacrifice Pale Echoes to travel to and from the world of memories. It also allows players to keep memories and Lexicons entries collected in their last playthrough.

Pale Echoes  is a wonderful experience, but it does have it’s faults. One of the most major being graphics options. This is a game made with RPG Maker and that means there are restrictions to window size. This results in a horribly small window when being played on a high resolution. I found the easiest way around this was to just lower my resolution as far as I could while playing the game. This is a major problem with RPG Maker games, but it’s a problem with the engine itself, not the game. Still, I couldn’t help but think it was worth mentioning.

I also ran into a small issue in the game during my playthrough. Remember how I mentioned that three memories must be materialized every turn. Well, it turns out that the player can hit the joystick to the right to bypass this process at the start of a turn. Unfortunately, doing so will result in the game hitting an unexpected error and crashing. It was a small bit of oversight that will hopefully be fixed with a patch.

Not taking into account the resolution issues mentioned above, Pale Echoes does have some nice art. It’s definitely not anything amazing and looks most like the JRPGs that can be found on the Super Nintendo. What was really nice though were the enemies designs once battle had started. It was a lot like a Dragon Quest/ Warrior game in the sense that the enemies are shown in high detail and the player’s characters aren’t seen. I also enjoyed the stark contrast in setting when adventuring between the real world and the world of memories.

The audio in Pale Echoes is wonderful. It’s not so much the actual songs in the game that make it so. See, the game uses generic music that wasn’t made specifically for it, but it still sounds good. What is great is how there is no music in the normal world. It really adds to the atmosphere of it being a dead planet. However, once players jump into the world of memories, the music kicks in. This adds to that stark difference between the two settings that I mentioned above.

Overall, I really enjoyed my time with Pale Echoes. I’m always a bit hesitant when its comes to game made in RPG Maker, but this turned out to be one of the gems. It’s got an interesting story and setting, a unique combat system and its obvious that a lot of care went into the other elements of the game.