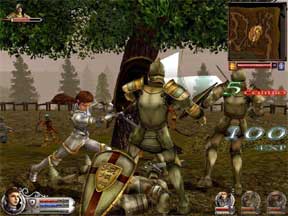 The Hundred Years war has begun, and it’s your job to liberate France from England. Luckily, you have a little girl on your side named Joan of Arc.

Joan of Arc at first looks like a shooter or at least a slasher, but later in the game you realize that it is also an army-level strategy title. You start off playing Joan and one of her faithful companions. Later in the game you will meet several playable characters that can be controlled in third person.

The graphics in the game are beautiful. Castles look realistic right down to the individual stone blocks that make them up. The characters are also well rendered and look extremely realistic for their style.

Your first couple of missions will set the tone of the game. Think of it like a third person action adventure, but with an accompanying squad. You will lead your squad toward your objectives, like meeting a friend in a grove of trees outside of town or destroying a British camp of soldiers. You control your hero character, and your squad fights to the best of their abilities alongside.

When you take damage you can heal up by eating fruit and other food found along the way, or by drinking healing potions. Each hero character has a personal inventory and also a squad inventory. If you place food into the squad inventory, then your men will grab it and heal up when necessary. One of the challenges in the game is keeping enough food in your squad’s inventory so that your men don’t get killed off as you travel. Thankfully, the AI of your party is fairly good, so they will not do suicidal things too often, and mostly keep close to you.

Eventually you will get into the realtime strategy elements of the game where you use a typical top-down view to manage your armies, give them flanking commands and set up siege equipment. The interesting thing is that at anytime you wish, you can move back into third person mode and whoop some arse yourself.

So lets say a battle is not going well because your left flank is weakening. No problem. Just take Joan or one of your hero characters over there yourself and beat the tar out of the English using all your special moves and abilities. Getting a hero into the right part of a massive battle is one major key to victory.

Each level is huge, and will have you tracing all over the massive countryside several times. Your ultimate goal might be to siege a castle, but there are villages to liberate along the way, side quests to rescue friends and a myriad of other adventures to have if you know where to look.

The biggest problem with the game is that the dual nature seems to add some frustrating flaws into the mix. On one mission, Joan got stuck inside a castle tower because her army would not move out of the stairway going up into the keep, which blocked her inside. In another, I was unable to properly deploy my artillery. In both cases I was able to find a workaround that involved switching to another character or unit and letting the computer AI work out the problems, but it was still frustrating at the time.

For that reason, I am going to rank the gameplay score a little low for Joan of Arc, but everything else far above average. It’s very nice to see a company try to do something new, even if a few minor flaws creep into the mix. Joan of Arc earns 4 and + GiN Gems for her war chest. Lets hope that is enough to keep her away from any burning stakes.