The Xeno series is a largely disconnected set of games with similar story elements among them. Xenoblade Chronicles was one of the swan songs of the Wii, a game with mediocre graphics but incredibly open environments, one of the best soundtracks of all time, and an over the top Japanese story that starts off as a revenge tale against sentient Roombas. Xenoblade Chronicles X was a major shift from the first game: It sacrificed its overall plot presentation for strong side quests, emphasis on exploration, as well as a strange choice in music tracks, which made it polarizing among the niche fan base the first game already had. Xenoblade Chronicles 2 is a lot more like the first game, for better or worse, but does is it an improvement over the original, or does this direct sequel think it can take you? Let’s find out. 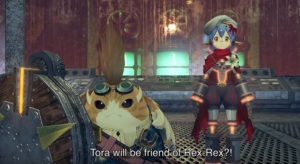 Xenoblade Chronicles 2 opens with a young boy named Rex, a salvager who digs long-lost artifacts out of the cloud sea that covers the surface of the planet, called Alrest. After some brief worldbuilding, Rex gets into a fight with some of his dredged cargo, then immediately moves on to the first town for a big job that winds up with Rex getting killed and then resurrected by his new Blade partner, Pyra. Drivers are the most powerful people in Alrest, large in part due to their powerful living weapons called Blades, so it’s pretty convenient that Pyra shares half her life with Rex so that the game can continue after the first couple of hours.

The cast of characters are almost immediately likable, with perhaps a couple exceptions. Rex is a hardworking, optimistic type of character who performs a dangerous job so he can send money back to his home village, while Pyra is a demure girl with her singular goal in mind of reaching Elysium. They’re joined by several more characters, some ridiculously over the top like Zeke, a loud-mouthed boaster with luck horrible enough to cause boulders to fall on him, or the smart-mouthed Nia who does a good job keeping everyone in line.

The plot of Xenoblade Chronicles 2 is the epitome of a fast-moving JRPG. The very first chapter ends in an explosive, dramatic sword fight atop a burning ship. Each chapter tends to end with a major event or revelation that may leave you itching to see more. There’s action, somber and saddening moments, lighthearted comedy, basically everything you’d expect out of a shonen-inspired plot. Whether or not this is your cup of tea is entirely subjective; some may find the humor cheesy and awful, while those who like the Tales series may find it perfect, for example. 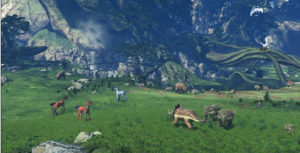 Obtaining new Blades is an integral component of the game- addicting, at first, due to the gacha game-esque randomization of opening Core Crystals which can give you new playable weapons of varying elements, skills, and affinity. Some Crystals may be rare or even legendary, which can give you a higher chance of discovering coveted rare Blades, which tend to have more skills or higher stats than common ones. It’s a lot like Pokemon, except a lot of the characters you capture in this game happen to have been designed by varying manga artists so you can get everything from a monstrous beast like Wulfric to a peppy cheerleader like Kora. A fair number of rare Blades are obtained throughout the course of the game’s story, but around 20 are obtained exclusively from the gacha Core Crystal mechanic. 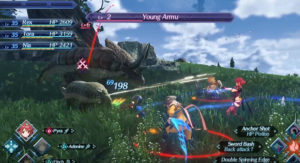 Combat in Xenoblade 2 is explained via tutorial dialogue boxes over the first quarter of the game, slowly introducing players to new concepts so as not to overwhelm. There’s a lot to combat in Xenoblade 2, so it tends to be good explanations are pieced out 15 or so hours. To give a brief synopsis, each Blade has an element three arts and a special attack with four different levels. Drivers, the characters you play as, use the arts of one of the three Blades equipped, and players can coordinate arts to launch enemies into the air and then smash them into the ground for big damage. You can also combine the special attacks, say by using a fire, water, and then fire again to create a steam explosion for tremendous amounts of damage that can debuff an enemy. On top of that, you can combine launching enemies into the air with the special attack combinations for even more damage, and even use chain attacks to burst leftover elemental energy from aforementioned special combos to deal massive amounts of damage (into the millions, easily, if you were skilled enough to plan your party accordingly, even at mid-game).

[amazon asin=B01MU9VUKN&text=Start your own awesome adventure with a copy of Xenoblade Chronicles 2 from Amazon!]

Xenoblade 2 breaks combat roles into defined archetypes, as well, with tank Blades being the ones who tank the brunt of damage from enemies, healer Blades as support, and attack Blades to actually dish out damage. Combat is satisfying but never obtuse, thankfully, though players are expected to have a grasp of the battle system by the third chapter (which is probably the time you would need to take common tank Blades off of the healer, Nia, due to her low HP pool, for example, and let Tora do the majority of tanking). Preparation is equally as important as play skill in any RPG, however, which is why it’s important to constantly be managing your party and customizing everything they do to best suit your play style. Customization is a huge factor in all of the Xenoblade games, and 2 is no different as there are many systems that let you customize and take full advantage of combat. 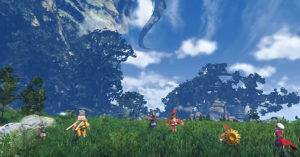 Players can upgrade their Driver character’s arts to deal more damage or gain bonus effects, upgrade affinity charts to unlock new skills for Drivers as well as every single Blade, equip accessories for Drivers and Blades that can provide a plethora of helpful bonus effects, use consumable items in your pouches that can refresh your cooldowns more quickly among many other beneficial effects, and lots, lots more. Those who grasp all of the customization systems available will quickly shift from saying, “Ugh, these monsters take too long to kill” to, “Wow, these high level bosses are dying really fast.” Combat, overall, is extremely rewarding and easily the most intricate entry in the entire series.

Rampant side quests are another returning feature from Xenoblade Chronicles, and while they’re similar in completion style as they’re oftentimes fetch quests or go kill specific monsters, their execution is different in that you have no risk of over-leveling your party should you choose to do a large number of them. The experience from doing side quests, mercenary missions, even discovering landmarks gets banked so players can use it later to level up the party as much as you wish. Some players may want to keep their party roughly at the level of the roaming enemies throughout the various chapters, while others may prefer to be level 70 and steamroll enemies at level 43, the choice is left up to the player for how much you may want to grind or better tailor your experience.

The graphics of Xenoblade Chronicles 2 do not disappoint. The visual design is absolutely stunning in almost every respect, as the characters pop and the environments really bring the fantasy world of Alrest to life. Unfortunately, while the visuals look phenomenal, there are significant performance issues that run rampant through the game: Slowdowns can be frequent, especially in areas with loads of particle effects which can cause the Switch to chug. Portable mode is not up to the usual visual fidelity standards that we’ve come to expect from Switch exclusives, either, as the resolution takes a heavy hit, causing smudgy visuals due to a loss of anti-aliasing as well (especially obvious during combat).

The soundtrack is superb, easily being some of the best musical direction in a long time. Compositions are complex, aptly put together, and puts you into the perfect mood while exploring the varied areas of Alrest. There’s a little something of everything in the soundtrack, from the booming orchestrated brass of Mor Ardain’s wastelands, to the heavily rock-inspired tyrant monster theme; the soundtrack is just pleasurable listening across the board. The English voice acting is hit or miss, however, depending on character. British accents are featured prominently across the cast, some sounding more Welsh or Irish than what most know of a standard accent, but some of the performances are spectacular, such as Jin’s. Thankfully, the Japanese voices are also available if Rex seemingly being incapable of getting angry unnerves you. 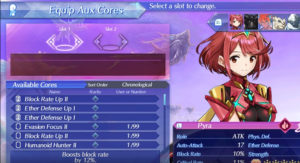 There are also mini games to help break up the monotony as well. One of the Driver characters, Tora, can’t use real Blades so he decided to just make his own artificial Blade named Poppi. Poppi and her three Blade forms are easily the most customizable thing in the entire game, as you can basically define every single ability you want her to have, what role you want her to take, change her element, and more. Poppi’s upgrades can be created from Ether Crystals which are obtained from a mini game called Tiger Tiger, which plays a lot like an old 8 bit game modeled after salvaging. Separate from Tiger Tiger, players can also play a salvaging mini game to collect cash and items, which is easily the best way to acquire money in the game.

The time it takes to finish Xenoblade Chronicles 2 is roughly between 60-80 hours, depending on how much of the side content you wish to do while you progress to the end. For full completion, most likely it will take 120-180 hours, as there are quite the number of unique and powerful bosses with power well beyond your party’s level cap. The game itself can be beaten without ever grinding, but defeating the super bosses in the post-game will require significant setup, time investment (especially in unlocking the affinity chart bonuses for your different Blades), and very few play mistakes while actually trying to fight the bosses. Several of these super bosses will check your competence with the battle system in ways the storyline enemies never could. 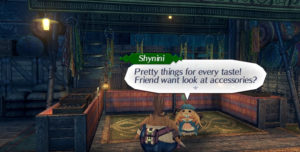 Overall, Xenoblade Chronicles 2 is a JRPG fan’s JRPG, as it strikes all the right chords. It is full of anime inspiration in everything from its character designs (some literally drawn by manga and anime artists) to its dramatic storytelling. People who don’t enjoy anime character designs, storytelling, or just don’t like JRPGs should stay far away from Xenoblade 2, as it does nothing to bring players who aren’t already open to the genre. For fans of the genre, however, this is easily one of the best JRPGs you could play right now. Poor visuals in handheld mode hurt the experience of Xenoblade 2 a bit, but this is easily one of the best JRPGs available right now for fans of the genre.