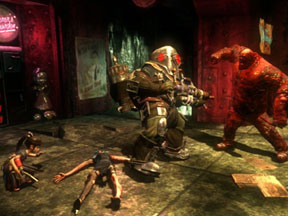 When I played the original Bioshock back in 1997, it hit me personally. Not just because it was the game I played when I suffered my first Red Ring of Death, but it brought back memories of another great series I used to play on the PC, System Shock. It was a great first person adventure shooter with a nice touch of survival horror, made even better with the addition of plasmids and the deadly Big Daddy protectors.

The only problem I really had with the first Bioshock was the terrible endings. I still cannot understand why in my ending (obtained by rescuing all the Little Sisters,) my character was seen at his deathbed. I even wonder if his dying was a result of injecting himself with all those hypos.

Still, that wasn’t enough for me to put the game to the same level of disgust I’ve shown towards other titles such as Bionic Commando, whose ending actually destroyed a 20 year legacy. I still maintained a strong interest in the series, and had Bioshock 2 on my priority list for 2010. For the most part it succeeded in keeping my interest, but a few factors prevented me from enjoying it quite as much as the first game.

Bioshock 2 begins in 1958, shortly after the fall of Rapture. The player is in control of "Subject Delta," one of the first Big Daddy models that are bonded with their own Little Sister. However, both daddy and child run into eventual antagonist Sofia Lamb, who claims that the Little Sister is actually her daughter, Eleanor, and mentally coaxes Delta to put a gun to his head and pull the trigger.

We jump ahead ten years, and now with Andrew Ryan dead, Lamb is in charge of Rapture. And with her in charge, Rapture falls from Ryan’s belief of individualism and instead follows Lamb’s belief of the collective effort, claiming that the "self" is the root of all evil. Delta is resurrected via Vita-Chamber, and starts to receive telepathic messages from Eleanor seeking help.

Little Sister protector Dr. Tenenbaum from the first game returns and informs Delta the only way to save Eleanor is to locate her deep within Fontaine Futuristics. Along the way, Delta learns via audio logs found all over Rapture the actions of Lamb and how she ends up in charge. The story is quite engaging, and provides a good insight of the rivalry between Lamb and Ryan.

For a majority of the time, the game plays like the original Bioshock, as Delta explores the depths of Rapture to locate his lost Little Sister, picking up weapons and plasmids.

Recovering other Little Sisters is again a huge gaming element, including deciding whether to rescue or harvest them (providing double the plasmid producing ADAM at the expense of the Sister’s life.) But now as a Big Daddy prototype, they can be adopted. I do, however, find it strange that after I kill a Big Daddy, its accompanying Little Sister mourns the loss like before. But when I come up to her she accepts me as if I were her own. Doesn’t she realize I KILLED her partner?

But with adopting, there is the possibility of gathering up to two special splicer corpses scattered around the level to obtain more ADAM. The end result turns into a tower defense type game, where you have to set up traps, both ammo and environment related, to hold off the splicers until your Little Sister finishes her gathering. At times I found the experience to be overwhelming, even with the traps that I made, and then there were times when I set up traps, only to have no splicers show up at all. It ends up being both tedious and at times, and a huge waste of ammo. (At least that which I can’t recollect.)

However, the real challenge comes after dealing with all the Little Sisters in each level"the BIG SISTER! You think the Big Daddy is a tough monster to deal with, you haven’t seen anything until you face one of these witches. They are fast, aggressive, resistant to your plasmids, and will not rest until you are sent back to a Vita-Chamber. They are the T-1000 of the Rapture community!

Hacking is also another issue. The original Bioshock performed hacking as a successful Pipe Dream-style minigame. It worked quite well while maintaining a sense of challenge. But here, it has been replaced with a "stop the marker" minigame. The needle must be stopped at either a green or blue line to continue. Blue gives a bonus of extra items, longer camera durations, more accurate turrets, etc. Stopping the needle on a blank spot causes a shock, while a red marker signals an alert that sends security bots chasing you. It’s not terrible, but I just miss the original’s hacking mode.

The main campaign lasted about 10 hours, which is a decent run for a shooter game like Bioshock 2. However the way the game ends is somewhat disappointing. After the final battle with Fontaine in the original game, I was hoping for the same during the sequel. But the way it stands, it’s a final survival shootout, as if I’m protecting another Little Sister. Eventually there are six possible endings, which means multiple replays, but I will say the one I came up with was just as weak as the one I obtained in the first game. But then again, this follows a trend I noticed, where the second game in a series tends to suffer from a weak ending.

Thankfully the environment, both visually and aurally, is as entrancing as ever. It is gorgeous to look at, even though the frame rate does tend to take a nosedive when entering a flooding area on the 360. On the PC, we didn’t find any such problems, other than long load times between levels.

And speaking of flooded areas, there are times when Delta, already protected by a diver’s suit, will need to venture outside of Rapture. A smart move by 2K Marin is the addition of a "lock frame rate" option, which keeps the game running smooth at the cost of some graphic detail. I’m glad to see that we can now have the option that PC gamers have always enjoyed. I’ve always been the type to prefer a smoother frame rate over image quality.

Some of the settings are just unbelievable. One setting takes place in an amusement park history ride, showing off Ryan’s belief of individuality from the oppression of what he calls the "parasites." One scene shows the typical "nuclear family" sitting in their living room until Ryan’s voice mentions about how the "parasite" will take your young away to fight in a war and die. All of a sudden, a giant hand grabs the kid and pulls him away on a track to the door. For some reason, this reminded me of the amusement park stage in Max Payne 2 that worked the same way.

I will say the sound is amazing. While the moan of a Big Daddy can be haunting, it’s nothing compared to the impending shriek of an incoming Big Sister to send me running for the nearest flood lock. Even all the voice acting is top notch, just like the original game, and of course having the 40s-50s style music fits the eeriness of Rapture perfectly.

Sure I may have had my issues with the changes in Bioshock 2, but in the end it is still a great first person experience. 2K Marin continues to make Rapture a mysterious place to venture into, and hopefully if they make the third game in the series, it can finally provide a convincing finish to complete the experience.

Also, Bioshock 2 now has a multiplayer mode, which is getting to be a necessity for shooters these days. The multiplayer here is pretty good, especially since the battlefields are inside those same creepy undersea areas that you will grow to love in the single player experience.

PROS: Same great atmosphere as the original Bioshock. Being able to play as an "original" Big Daddy an exciting change. Minor control change allowing melee combat is much needed. Excellent storyline going further into the fall of Rapture and the origin of the Big Daddys. Big Sisters are brutal! Up to six possible endings, meaning extended replay value. Multiplayer!