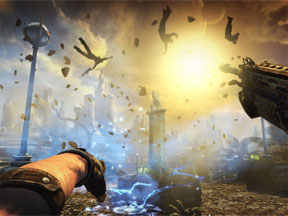 From the moment you slip into Grayson Hunt’s size 11 boots, you know what you’re in for. Your vision is blurred from overindulgence in booze and the opening cut scene is a veritable swearathon. As you get to grips with the controls, you suddenly think, why use the handle when you can kick a door down or why press a keypad when you can mash it with a fist? This is the world of Bulletstorm and its complete and utter carnage.

Bulletstorm is something akin to Burnout’s crash mode. The player is rewarded for more and more ludicrous kills. Not only is kicking something into a cactus plant kind of fun, it also gets you more points. Added to the reward system are more, bigger, better guns of comedic proportions. People Can Fly has created a game that places fun at its heart and leaves the beard stroking earnestness very definitely in the closet.

The game tells the story of Grayson Hunt, a former soldier, who now runs with an outlawed army called Dead Echo. Things kick off when drunk and impetuous Grayson decides to propel their tiny pirate ship at a much larger cruiser, in a misguided attempt at revenge for a previous betrayal. Most of the crew die, they crash land on a strange planet and his best friend Ishi Sato has been patched up using cyborg implants. Hey presto, we’re thrown into a race against time to get off the planet and get Ishi to a doctor to prevent his humanity being taken over by his implants. Oh and they meet a chick with a gun.

Yup, that’s right. Bulletstorm is pretty much Heavy Rain’s kryptonite. It’s kind of like watching a Stephen Seagal movie, you know you shouldn’t, but it’s actually kind of amusing, in its own mindless way. Just don’t concentrate on the story and you’ll do just fine.

The real aim of the game is to kill stuff in new and interesting ways. Fortunately, the player is given an array of ways to do this. In Bulletstorm the action comes thick and fast, with barely a chance to breathe between kills and witty quips.

When it comes to your armory, the Leash is the jewel in the crown, allowing you to pull enemies towards you in slow motion and then dispose of them as you will. Boot them into a cactus to get the ‘Pricked’ shillshot and extra points or just pull them into some conveniently placed iron spikes, for a little impaling. This is crass, puerile humor at its best. Shoot them in the ass or the balls for more points and an amusing pun, which both flash up on the screen. For instance, a shot to the throat rewards you with points, the amusing Gag Reflex tag and then you get to snigger at the melodramatic, spluttering, death throes.

Dreaming up ingenious ways to kill foes is where the Unreal Engine comes into its own because the lush environments provide a cornucopia of obstacles to snag them on. Kick exploding barrels in their direction, or into a hot dog wagon, and boy am I glad this place seems to grow a lot of giant, spiny cactus. And fortunately, somebody needs to get an electrician in because there are a lot of severed cables lying around. Don’t watch out and somebody might get leashed and kicked into a bunch of those. Now that would be an amusingly macabre end.

There are man eating plants, which can be used to your advantage. And don’t forget, glass walls, giant bits of machinery to grind them, and the obligatory kick off a precipice. You name it and the environment serves it up on a platter for you.

Bulletstorm seems to be the game that keeps on giving, as long as you keep on killing. The rewards come as thick and fast as the action. When you tire of the leash/kick combo (which you will), you can spend you hard earned points on new guns. Big guns. Bloody enormous guns.

The Bone Duster is a shot gun that pretty much does what it says on the tin. Use it at close range and you can send an enemy flying with satisfying gusto. The Flail weapon fires an explosive chain which wraps around objects, heads, necks or anything. Once in position, hit fire again and the chain explodes. For a strategic group kill, flail an enemy, wait until they are surrounded by allies and then blow the lot of them up. And the sniper rifle offers some extra fun, with its bullets which can be guided to their target.

Each weapon you unlock comes with a list of skill shots and a description of how to get them. However, there is opportunity for you discover shots you didn’t even know existed. Some levels present exclusive skill shots, encouraging you to keep a beady eye out for any interesting killing potential.

Although you do tire of the skill shot puns, the action moves at such a pace, that you never have time to tire of the gameplay itself. The environments look nice enough and takes the player from precipitous, collapsing platforms, and rusty girders, looking out over a tropical landscape, to urban areas and dilapidated municipal parks or deserted holiday resort.

The player lurches from one near disaster to another. A battle in a model metropolis raises a smile, as you all tower Godzilla-like among the mini skyscrapers. At the end of this mission you are granted a remote control and a giant dinosaur that shoots lasers from its eyes, which is just one of the great set pieces this game offers. People Can Fly really knows how to please us nerds.

I think we’re all a little weary of the space marine and Bulletstorm breathes some new life into that well-worn idea. Okay, so Grayson is from the same gruff, muscle man with a gun school of game hero, but he also pokes fun at those tropes and he’s beaten Duke Nukem to the punch (this time around).

The only niggle for me is the AI. Your two companions are next to useless, get in your way or get snagged on a bit of scenery for an entire fight. The pair of them are about as much use as a chocolate teapot.

Overall, Bulletstorm offers more laughs than grumbles and it’s a pretty slick package that offers something new to the oversubscribed military sci-fi FPS. Okay, so it’s got schoolboy toilet humor and gratuitous tongue-in-cheek violence, but essentially this is a game that’s remembered that we play these things to have some fun and it does it with style. Expect to see a string of pretenders to the Bulletstorm crown.