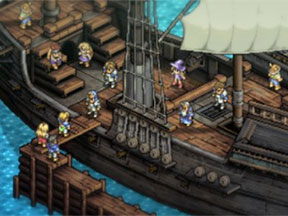 Tactics Ogre: Let
Us Cling Together

Tactics Ogre: Let US Cling Together is a remake of a Playstation (yes fanboys I know that in Japan it was on the Super NES first) game by the same name. That being said I never got to play the original game, which is why I was so excited when I heard that a remake was coming out for the PSP. Since I’ve never played the original I’m sure you’ll understand if I don’t compare the differences or similarities between the two. And with that out of the way, on to the review!

But where should I start? There is so much I love about this game that it’s a little overwhelming. Well let’s just start with the story then.

The story of Tactics Ogre: Let Us Cling Together is told from the perspective of Denam Pavel, whose father is taken away by the Dark Knights. The capture of his father leads Denam, along with his sister Catuia Pavel and best friend Vyce Bozeck, to fight back against the oppression of their country. This is only the beginning though as the story will lead you through turmoil and treachery.

Not to give out spoilers or anything but if you enjoy a warm cuddly story about the bonds of friendship and how good will always come out on top, do not, let me repeat that, do not play this game!

Every character in this game has a story, which I love as it helps breathe life into the world. That being said, I can only think of a couple of times I’ve ever felt good about winning a battle. Most of the time I feel horrible about having to kill someone (maybe I’m just soft hearted).

Here is an example of what you can expect: I killed the leader of a group of pirates because they attacked me at the docks. After this I was attacked by the pirate leader’s wife, who stricken with grief has brought it upon herself to avenge her late husband. The battle continues and I kill the wife, only to feel like a total jerk because I destroyed their lives. Wait it’s not over yet. As the wife falls to the ground dying she feels it’s necessary to tell me that not only did I kill her, but also her child. She was pregnant! Now I just feel like a complete and utter jerk, but much like the rest of the battles in the game I kept telling myself it was a necessary evil to help save my country from war. When the story and characters draw me into a game so much that I find myself trying to justify what I’m doing to not only myself but other characters in the game, well you know it did a dang good job.

As events unfold in front of you, you can make choices as to how you want to handle the situation. Do you betray your sister or do you help her in her time of need? Many questions like this lie throughout the game, and each one moves the story forward in different directions. Not only do your choices affect the story but also the characters that you keep in your party. Each character has their own views and beliefs as well, and if you diverge from their views too much you may find that character deserting you after a battle. This also affects how easy it is to recruit other units into your party. If someone among the enemy forces doesn’t like what their nation is doing they may be more than willing to join your cause if you ask them.

Two of the more unique features of Tactics Ogre: Let US Cling Together is The Chariot Tarot and The Wheel of Fortune (and no it doesn’t have anything to do with awkward TV contestants spinning a giant wheel for money).

The Chariot Tarot allows you to "turn back time" during battles to change the results of what happened. Let’s say that you attack an enemy unit and it blocks your attack, well just turn back time and try attacking from a different direction instead. This may seem like a cheap and easy way to play through the game (and sometimes it is), but more often than not I found myself struggling through battles even while using the Chariot Tarot.

Next up is the Wheel of Fortune, while not exactly important itself it is a stepping stone to an important feature. The Wheel of Fortune allows you to go back and view scenes from earlier on in the games, as well as see scenes that aren’t shown in the main story line. Also it lets you know what path you are traveling down in the story (it works like a tree branching system). After you have completed the game though the Wheel of Fortune upgrades into the World Tarot, the World Tarot allows you to jump back to anchor points earlier in the game and make different decisions than what you did on your first play through. So basically it’s a new game feature without having to start a new game (I’ve already promised myself that I’m going to go back and recruit all of those "enemies" that I felt horrible about killing to help ease my conscience).

Alright time to talk to you about the gameplay. As you might have already guessed, the gameplay in Tactics Ogre: Let Us Cling Together is that of a Turn Based Strategy RPG, the environment is separated into square tiles that units move around on to better position themselves to attack another unit. If you’ve ever played a game of this type (such as Final Fantasy Tactics or Fire Emblem) then you are going to know what you’re doing. If this is your first time jumping into a game of this type, well prepare to get your backside handed to you because this game is about as hardcore and unforgiving as they get (yes even with the Chariot Tarot).

Now there are a couple things that Tactics Ogre: Let Us Cling Together does do differently from the average Turn Based Strategy RPG. The major thing is its leveling system. Instead of each character leveling up on their own based off of the experience they earned in battle, classes are what level up. Let’s say that our hero Denam is a level 13 Knight. Now we also have a level 10 Wizard. Change that Wizard into a Knight and he will also be at level 13. This system makes it really easy to buy extra units and have them ready for battle right from the get go. On the other hand though, if you’ve been ignoring a class then you are going to find it really hard to try to raise it when everyone on the field is in their 20’s and they are only a six. So while it’s a bit of a double edged sword, it still makes for a fresh and fun leveling system that I’ve never seen before.

The other thing I want to talk about that Tactics Ogre: Let Us Cling Together does differently than the normal Turn Based Strategy RPG is actually a smaller feature, but still important enough that it has saved me more than once in battle. Archers in this game can break their range distance. If you have a bow that can reach from 5-8 tiles then that is exactly what the game will tell you, but if you have an uphill advantage then you can shoot even further, even though the game doesn’t show that you can. This truly adds to the idea that fighting an uphill battle is harder for the attacker than the defender. Many times I found myself able to hit the enemy units as soon as the battle had started. It’s a small but cool feature that helps push this game past your average Turn Based Strategy RPG.

Okay, it’s time to take a look at the graphics. The whole game uses sprites to represent everything in the game. Basically everything will look like a toned down and miniature version of what it normally would. This doesn’t leave the game feeling childish though. The artists went out of their way to make sure that when a character cries out in anguish, you will feel their pain. One major advantage to using sprites of this type is the lack of detail the game has to load while still being able to move you emotionally.

Also for those who played Final Fantasy Tactics: The War of The Lions port for the PSP and were frustrated beyond all beliefs at the amount of load times in between attacks, you no loner need to worry. Tactics Ogre: Let Us Cling Together doesn’t have that problem at all.

The musical score of this game is beautiful. Tracks that play through battle really help to draw you into the world. For example, when fighting the undead in the middle of a forest at night the music will be eerie enough to creep you out, but still has a tempo that reminds you that you’re in battle. This holds true to all the other music in the game as well. Cutscenes are aided in making you connect with the characters by having the perfect music for the perfect situation.

All and all Tactics Ogre: Let Us Cling Together is an amazing game. If you’ve never been into this type of game then this isn’t the point to jump in as the battles will tear you apart (though you will have to miss out on an amazing story), but if you are a fan of this style of game then I insist that you pick this game up and play it till your hands fall off.

Tactics Ogre: Let Us Cling Together gets a perfect 5 GiN Gems out of 5!