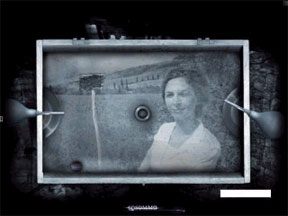 Anyone else remember Majestic, the game where you signed up and you started getting faxes and so forth like it turned into some movie thriller with Michael Douglas and Sean Penn? The scope of that game was grand, which in retrospect was its downfall. Its failure was such that no one has attempted anything similar in the last three years.

Enter Missing: Since January. Like Majestic, Missing sets up an immersive environment where the game characters email you, and have made their own websites and so forth. But it differs from Majestic in several ways, and I believe these are also the reasons that Missing will succeed where Majestic failed.

One, in Missing there are no other players in your environment to hinder your progress. Sometimes on online games you run into players that lost interest in the game for some reason, leaving you high and dry, or otherwise can’t be relied upon to share vital information. The play in Missing keeps flowing along, without other players to mess it up for you.

Two, Missing has a more tightly-focused mystery than the ongoing ‘corporate conspiracy’ that Majestic offered. From the very beginning of Missing, you are set with a specific goal, and there is little chance of straying too far from that goal.

Three, Missing decided to keep things simple and just leave the experience to email, websites and of course the game interface. It must have been quite a task for Majestic to keep track of who is supposed to get faxes when, and so on.

And finally, four, it is probably easier to get people to pay $20 once now than it was to get them to pay $10 a month back then. Sure, now we all pay for at least one online game, but the concept has been around long enough that we all know basically what we are getting. Back in 2001, there were like three online games extant, and they were all medieval fantasy role-playing games. Getting people to pay a monthly fee for a whole new type of online game (one that "plays you," no less) was quite possibly one of the most difficult tasks set forth in the entire history of computer gaming.

Well, I didn’t really intend for this to become a treatise on Majestic, but, since that was the only other game that I know of that attempted real-world immersion, I guess the need to compare the two was overwhelming. Now, on to the review, I guess.

Missing is a well-put-together game which does a good job of immersing you in the world of a megalomaniacal serial killer, where you are forced to play his game according to his rules in order to find the pair of missing people you have been tasked to find.

One of the unique aspects of the game is that you don’t play a character. You play"you. Not some guy or gal you can see on the screen, just you. You begin by starting the CD-ROM (which in the context of the game is being distributed by the news company that employs one of the two missing people on the box) and playing the Phoenix’s game. As you solve puzzles you gain insight into the serial killer’s personality, connection to the murder victims, and the ultimate fate of the missing Jack and Karen.

Mostly the puzzles are challenging and reasonably entertaining. Some (the best ones) involve going out in the Internet to find historical and geographic facts that you need to solve them. The true scope of the game is felt here, as the makers must have made dozens of "fake" websites that have the actual facts you need. When you are searching for your information, it is sometimes hard to tell whether you are looking at a site made specifically for the game or (more frightening) the site was made by someone unrelated to the game for their own reasons. In either case, the facts you find are good enough to solve the puzzle so you can move on to the next.

There are a few puzzles that don’t use knowledge or logic or any typical puzzle-solving skill. They use reaction time and hand-to-eye coordination, because they are effectively little video games. I have mixed feelings about them – while they were reasonably distracting and entertaining, I don’t really feel they have a place in puzzle games, where the goal should be to use your reasoning to get by. Fortunately, there are only a few of them.

The least enjoyable type of puzzle was finding the exact position on the screen to place your mouse pointer, using changing visual or audio data to help you determine where the exact spot is. These were pure torture, and if these weren’t supposed to be puzzles designed by a depraved, megalomaniacal multiple murderer, I would say they have no place in this game. But since the sick bastard is out to make the life of anyone on his trail that of a living hell, he does a fantastic job by torturing you on these puzzles for the grater part of an hour each. Fortunately, there are only two of these puzzles that I remember, but then I may be blocking additional ones from my memory due to the trauma.

The game does a really good job of making you believe you are immersed in the world of a serial killer. When you start the game, you register your name and email, supposedly with the news organization. From that point on, you are sent emails from various people involved through the course of you solving the game. While these are automatically generated to be sent to you when you have progressed to a certain point or if a certain amount of time has past, they are worded well enough to give you the illusion if you want to have it. I even responded to one email as if it was a real person, and I received a reply from that "person," the content of which indicated that either some human actually read it and made a reply, or they have a quite sophisticated automatic system set up. Either way, I was impressed.

The sound played a large part in making the game as creepy as it was. From the bizarre noises that would be played in the background both between and during the puzzles, to clips of the voice of one of the missing people, the sound really helps you enter the serial killer’s little world. So make sure your speakers are turned up when you play.

The graphics of the actual puzzles are not especially spectacular. But in a series of still photos you get that flash sometimes that are quite disturbing (in a good way), and the video clips that you receive as ‘rewards’ for solving puzzles are fantastic. Some are a narrated documentary done by Jack (the missing reporter), others are produced by the Pheonix himself, such as footage of him stalking Karen (the other missing person). You just sit there and watch as his little schemes unfold. Often, there is information related to solving other puzzles in these bits of film so, even if you may not want to, you must watch them for clues.

The choice of the actors for Jack and Karen were right on the mark. They were both believable and sympathetic, and you really get to feeling for their plight and want to help them.

The final puzzle and so forth is mildly anticlimactic, but it doesn’t detract too awful much from the good feeling you’ll get of a job well done.

Overall, this game is engaging and challenging, and is worth your time if you are into puzzles. The elements of sound and video it brings al easily worth the four and a half gems I’m giving it.

Go on, try it. What have you got to lose? {insert maniacal laughter}