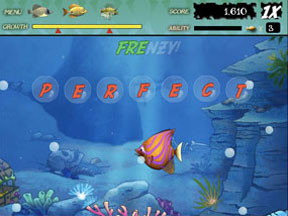 Do you remember doing puzzles as a child? Back then, it used to be so simple. You would get out a jigsaw puzzle, put the pieces together, tear it apart, and do it again. Now, however, the word puzzle conjures up a different image. There are puzzles of all shapes and sizes, particularly in video games. This is not a bad thing, though. In fact, after playing the games in PopCap’s Arcade collection, I doubt the word jigsaw will ever enter your mind again.

What makes PopCap’s games so much fun is the fact that they are simple, yet challenging. They are extremely addicting and constantly force you to think on your feet. This arcade collection contains four of PopCap’s most notable titles, including Bejeweled 2, Feeding Frenzy, Astro Pop, and Zuma. Each one of these games is an outstanding stand-alone title for the PC. Thankfully, PopCap was generous enough to roll them all into one arcade collection for the Xbox 360. And you can get them from Amazon (see the link on the right) for a great price.

The most notable of all the titles in the game is Bejeweled 2. The original Bejeweled was a huge success and its follow up is finding the same spot in the limelight. The game, itself, is very simple. Players swap gems which are adjacent to one another in an attempt to make a match of three or more. If you are able to match four gems, a power gem appears which will explode when matched, eliminating other gems around it. Matching five gems will create a hyper sphere which, when switched with a gem, will take out all of that type of gem on the board.

The graphics of Bejeweled are also outstanding. While this is only a puzzle game, the colors of the game and the depiction of light striking the gems is fantastic. When matches are made, shards of the gem fall toward the bottom of the screen in great detail. Hyper spheres will also send lightning bolts at gems causing detailed explosions.

Complementing the graphics perfectly is the audio of Bejeweled 2. The PC version actually doubles as a sound track when inserted into a CD player, and for good reason. The music of Bejeweled 2 is hypnotic at worst, and completely consuming when at its best. The sounds of gems exploding are also detailed nicely.

Bejeweled 2 is a tremendous game by itself. But that is only the first game of four in the collection. The second game is Feeding Frenzy. Again, a simple concept becomes an incredibly addicting game. The object of the game is simple. You are a small fish. You need to eat smaller fish to grow bigger. Then once you are bigger, you can eat even bigger fish.

While the concept of the game is simple, actually getting through the game is not. There are 40 levels in the game, each one getting progressively more difficult than the ones before it. In addition, there is also a Time Attack Mode.

The graphics of the game are also well done. They are simple but at the same time detailed. Some of the fish are brightly colored while others are a simple gray. As players progress through the game, different fish are unlocked, each one bigger than the last.

The sounds of the game add nicely to the atmosphere of the underwater realms. Each fish that is eaten makes a crunch, with bigger fish making a very loud noise when consumed. There are also sea mines that play a role in the game. When fish bump into them, a resounding boom echoes and fish are momentarily stunned. As for the poor fish that ran into the mine, well, he won’t be bothering you any time soon.

The third game in the collection is Astro Pop. Again, Astro Pop is a terrific stand-alone game. With the other games packaged with it, though, it becomes even better. Astro Pop is a game in which players must make matches of four or more bricks of he same color. The player’s ship can hold up to six bricks before being blasted off. Make enough matches and the level will be complete.

There are two characters that are playable right of the bat. The other two must be unlocked through various acts in the game. Each character has his or her own special weapon that will charge based on how many matches the player as made. Players must be quick when playing Astro Pop, however, due to the fact that a new line of bricks is constantly pushing down from the top of the screen, always threatening to bring the bricks too close to the ship.

The graphics of Astro Pop are perfect for the fast-paced game. The space ship, which collects and fires off the bricks, quickly darts from spot to spot along the bottom of the screen giving the game a frantic feel. Once again, the attention to color in Astro Pop is impeccable. The special weapons of the ships all have unique animations and look very well done.

Once more, PopCap also does the sound very well in Astro Pop. When bricks are grabbed by the ship, the player hears a zipping sound, as though the bricks are really moving at a high speed through space. Then, when the bricks are fired off and explode, the explosion sounds realistic as well.

The final title on the collection is last, but most certainly not least. Zuma is a phenomenal game from PopCap. Once more, Zuma takes advantage of a simple concept and makes it work perfectly. Players will fire colored balls from a rotating frog statue into a line of moving balls. If the line of balls reaches the pit at the end of the track, a life is lost and the level restarts. This simple concept becomes frantic as later levels contain multiple ball tracks.

The graphics of Zuma are well done once more. And, as will all of the other games, the attention to color and small details is outstanding. The animations are well done and the tension created by the line of balls getting closer and closer to the edge is increased by the sheer number of them on screen at one time.

The sounds of the game also add to the tension. As balls near the end of the track, the music becomes more frantic and panicked and players are forced to act quickly, or hear sad music of defeat.