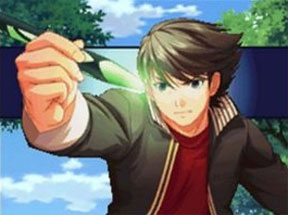 Time Hollow is exactly that: a hole in time. Go figure. But seriously at first the game felt like Quantum Leap without the mullet-headed, time-jumping hero (thank God!). However, this game is a great hit for Konami!

The game opens with real anime scenes and voiceovers. You play as character Ethan Kairos who is about to celebrate his 17th birthday. He is a watch collector (how original for a character in a game all about time) and is contemplating how to ask his parents for a very specific watch to add to his collection for his birthday present. However, as the evening passes, Ethan will discover that his world will be lost in a time loop.

He is enjoying dinner with his parents on the eve of his birthday when his world is completely turned around by a gap of 12 years. He wakes up on his birthday to find that his parents are missing. You’ll get to enjoy a real anime cut scene in between that will give more detail.

His parents are now missing, his room has undergone some interesting changes, and he is now in the custody of his uncle who, prior to the event, was sort of a black sheep in the family. The only things that haven’t changed for Ethan are himself, his friends, and his cat. The faithful pet just lounges on his bed all day long.

As Ethan begins to search out his answers he comes across a magical pen that he can use to draw a hole in time and step through the continuum. Don’t let yourself shrug this idea off as a boring pulled-out-of-your-left-ear kind of idea. It’s actually very original and requires some thought and investigative work before Ethan can use it. He has to find clues associated with his surroundings before he can use the pen.

Along the way Ethan will team up with his schoolmates and also meet new and interesting people. He can also pull up a map to view the town and transport to various points. Ethan will have to explore his school first in order to get the story moving. As Ethan interacts with people and his environment, the story will thicken and span out beyond just his parents’ disappearance.

And as Ethan uncovers clues the Hollow Pen will grow more powerful. Ethan will have to get specific details and piece together the clues in order to use the Hollow Pen. When Ethan does use the pen, it brings sort of a conclusion to whatever search he is on.

To use the pen you simply draw a circle on the touch screen over a specific area in the scene and watch the area open up before you. It actually feels like you’re reaching into the DS and going behind the scenery.

Time Hollow is viewed from a first person view so you can see as much detail as possible. Don’t overlook anything! You can interact with any object on the touch screen and if it’s important you’ll get the necessary information. Ethan keeps his progress logged where he pieces together everything from people he’s met to clues he’s obtained.

Movement in the game is small. You don’t physically move Ethan. You select where you want to go and then you explore the touch screen with your stylus. If there are people or objects to interact with all you have to do is touch them and the game will do the rest.

One awesome feature about the story is how nothing is concrete. You think you’re figuring the story out one minute and then you find out that it’s changed. It all happens suddenly so the game won’t bore you immediately. It’s not really a game that you can figure out in a day unless you don’t sleep. It may take a while.

If you ever played Hotel Dusk or Trace Memory you would probably enjoy this game thoroughly. It’s on that kind of a detective level. You will want to make sure every angle is covered and every scene accounted for. And if there is more to the story that you haven’t figured out yet, Ethan will prompt himself to keep looking before he can use the Hollow Pen to move forward. That’s a nice feature because it keeps you interested.

However, to be honest, it can get a bit boring when you’ve explored an area over and over again. That would be a good time to put the DS down before you throw it into a black hole of your own (cheap, I know).

As you piece the puzzles and clues together Ethan will connect his past together. Investigating the scenes is a lot of fun and using the Hollow Pen is a good thrill to conclude the case. I would recommend this story driven adventure to any fan of the DS’s prior investigative titles.