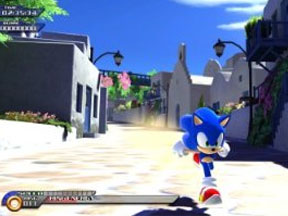 I have one question to ask Sonic Team. Is it that hard to make a good Sonic game anymore?
I just don’t get it. Sonic was amazing when on the Genesis (with the obvious exception of 3D Blast and to a lesser extent Sonic Spinball,) and the CD version (with either the Japanese or American soundtracks) was without a doubt my favorite first-gen Sonic title.

Eventually it started to go downhill, and it really started with Knuckles Chaotix on the 32X, a game so bad it exploited a useless "feature" where a single button press causes Knuckles or any of his friends to grow in size and then shrink.

I had to wait for Sonic Adventure on the Dreamcast for the next good Sonic game, and that, as well as Sonic Adventure 2, was ALMOST worth the wait. Almost because it started to add extra features which I feared would detract the original Sonic gameplay, namely Knuckles’ "find the three emerald shard" stages.

Since then I never touched another Sonic title, and for good reason. Every game that has been released has failed to live up to the expectations of the Genesis/Sega CD/Dreamcast, and that led up to the last Sonic game that came out for the 360 and PS3, what many consider, along with Shadow the Hedgehog, to be one of the worst Sonic games ever made. Heck, even the PS3 development kits threw it up at E3 (there was video evidence of it locking up at will.)

Sonic Unleashed might not be at the lows of the last 360/PS3 effort but as it is right now it has a long way to go to be considered even good. Once again Sonic Team cannot just be content with just having the original high speed, roller coaster style stages that made the Genesis games so good, they have to add a brand new gimmick. In this case, the werehog stages.

As a side effect in stopping Dr. Eggman (or Robotnik, whichever you prefer) and his latest weapon, armed with the polarized energy of the Chaos Emeralds, Sonic not only caused the planet to be shattered into seven segments, he has also mutated so that when night falls he takes the form of a werehog. So now, not only does Sonic have to deal with turning into a werehog at night, he has to find a way to reunite the planet.

In doing so, Sonic Unleashed takes the form of two games, during the day it is the same classic Sonic we know and love, running at a very brisk pace with no slowdown at all. Even the camera doesn’t present a problem most of the time. It might get a little disorienting at times but it’s easy to get back into the action afterwards. The strange thing is, these stages are actually quite fun, and if this was all that Sonic Unleashed consisted of, then it would definitely get a higher score.

But sadly that is not the case. These stages are rather quick, and then when night falls, the tedium comes on strong. The werehog stages consist of puzzle solving and tons of mindless, repetitive fighting, but it’s more like button mashing. These stages can take upwards of forty minutes and if you don’t die of boredom while playing them, you have earned my respect.

In addition, for a game that is based on a character known for speed, then why do the werehog stages seem to run in slow motion? It’s not just the gameplay that is slow, it’s also the frame rate. Can someone please explain to me why a Sonic game would have a graphic engine (appropriately named the Hedgehog Engine) run with such a terrible framerate? And it only happens during the werehog stages.

The werehog stages are not the only thing in Sonic Unleashed that made me cringe. There is a new character known as Chip. As a character who supposedly lost his memory, I really hope he gets it back soon because he is the most annoying character I have ever seen in a game. Take all the worst aspects of Jar Jar Binks, Dobby from Harry Potter, and Raiden from Metal Gear Solid 2 (minus the cool factor he showed in MGS4,) multiply it by 3,720 and you still won’t get the annoying level that Chip has. Even worse, when he flies around his wings make this slapping sound that almost sounds like a perverted act I cannot say in this review. Darn, and I thought Tails was annoying!

The back cover says "the difference is night and day." Talk about the understatement of the year! I just don’t get it. Why can’t Sega make a good Sonic game anymore? Why can’t they just use the Sonic stages and make that into a game? I would definitely buy that in a heartbeat, not a mishmash of good Sonic gameplay with horrible repetitive werehog fighting.

Do us a favor Sega, make a Sonic Adventure 3 and KEEP IT TO ITS ROOTS like you did with the Dreamcast.

Oh wait, I forgot, you never cared about Dreamcast owners. That’s why you went multiplatform.

CONS: Werehog stages are REPULSIVE! Boring, repetitive combat with a frame rate that takes a nosedive. Chip should win the award for Most Annoying Character in a Sonic game.