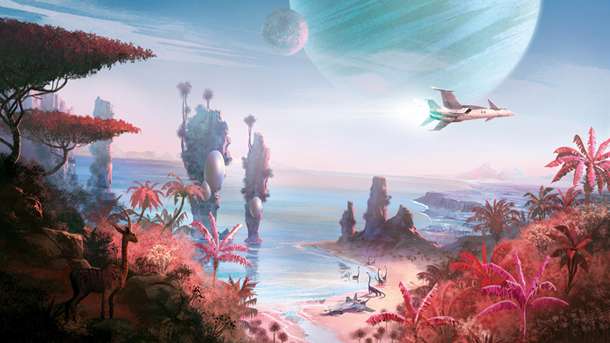 No Man’s Sky is a game about solitude and survival. The trouble is, many people expected a multi-player party in space, but the procedurally generated space adventure from Hello Games doesn’t deliver that part of the bargain. What it does deliver is an epic technical feat and a meditative (some say boring) journey to fictional planets. It’s not a perfect game and it’s not for everyone, but there’s lots to enjoy in No Man’s Sky.

You are on a planet, your ship is broken and that’s all you know, in the first moments of No Man’s Sky. There is a tutorial of sorts, but it certainly doesn’t tell you everything you need to know. Rather than hand-holding the player, the game leaves you to strike out alone and try to gather the things you need to fix your ship, in order to set off into space. You can always choose to stay and explore your home planet, as No Man’s Sky eschews quests, in favour of openworld gameplay.

As all the planets are procedurally generated, the way your game starts is down to the luck of the draw. You could land on paradise – a planet rich in life and resources and low in hostile enemies. Or, like me, you could land on a fairly desolate world with high radiation levels that deplete your suit’s protection, only to be shot down by Sentinels, if you mine too heavily. And you can experience everything in between. I’m assuming, you may even start on one of the most hostile planets, which would be a baptism of fire.

What do you do in No Man’s Sky?

No Man’s Sky is a space survival game. There is no multiplayer aspect. It isn’t even a shared universe, in so far as you won’t see other players, as you do in a game like Journey. You can see planets and flora and fauna other people have named, but you can’t meet or play with those people. When I landed on my home planet, the game was everything I expected it to be from the trailer – a solitary space exploration game.

[amazon asin=B00ZQB28XK&text=Want to explore the amazing vastness of space? Grab a copy of No Man’s Sky from Amazon and blast off!]

Much of your time is taken up mining for ore, using a multi-tool, which doubles as a gun and a scanner, as well as a mining beam. Planets, plants and asteroids have resources, such as carbon, iron and various isotopes, which can be extracted and put together to make other items.

Over time and with use, your suit, multi-tool and ship use energy and need to be recharged using various resources. The scanner reveals the location of different ores and minerals, as well as showing landmarks, such as relics, abandoned shelters, crashed ships and manufacturing plants.

The only limiting factor in collecting things is the inventory, which becomes the bane of existence in No Man’s Sky. Slots quickly fill up, so you have to jettison that Gek charm, in favour of Plutonium or Heridium, crucial for charging your suit or getting your ship off the ground.

‘Inventory full’ become familiar words, which stop you from gathering or even interacting with aliens. As beautiful as No Man’s Sky is, you do spend an inordinate amount of time in your inventory menu, emptying slots to make room for new bits and bobs. Progress is also measured by the number of slots you have in your suit or ship and it can become all-consuming if you’re the kind of player who likes to max out.

Fortunately, it’s quite easy to find new ships. Find a crashed ship and you can scavenge the things you need to fix it up. Alternatively, you can meet aliens on space stations or planetside landing pads and engage them for trading or just offer to buy their ship. You’ll need to do a lot of trading to earn enough units, but that’s a small price to pay for that extra slot or two.

You are not alone on these planets. There are three types of aliens and you can trade with them to gain access to new upgrade schematics and resources. You can also learn each of the three alien languages by visiting relics and monoliths, which also deliver snippets of lore.

Once you’ve learnt a new word, the next time you meet that alien race, the subtitles will highlight that word and translate it into English. This helps you make key decisions, such as do you tell the warrior to go into battle or advise him to run away? Your standing with each race changes depending on what you do in these interactions. However, I’m not sure how this plays out in the overall game and whether it makes a real impact on your experience.

The relics and monoliths are my favourite aspect of the game, so far. I like the idea of piecing together these languages and the little snippets of lore remind me of a diary entry from a Lovecraft tale.

In addition to the aliens, every planet is patrolled by the mysterious Sentinels. These are drones, which come and replace resources, once you’ve mined them. They also guard certain buildings.

Depending on the hostility level of the planet you’re on, if you mine too heavily or try to force your way into one of the guarded buildings, Sentinels will attack. If you don’t dispatch these drones quickly, larger reinforcements come to take you down.  On the plus, you can earn an award for vanquishing Sentinels, so if that’s how you roll, make like the aggressor. I choose to avoid  conflict and just take what I need – a lesson I learnt in my first five minutes of play, when Sentinels shot me down for overmining carbon.

No Man’s Sky does have an overarching objective and that is to get to the centre of the universe. You can also follow the path of Atlas, which is indicated on the star map. In order  to follow these paths you need to explore planets, upgrade your ship and your suit to get more slots and improve your warp drive.

Playing to complete these tacked on objectives leads to a grind-style rinse and repeat experience, which misses the point of No Man’s Sky. As soon as the trailer told me I could rename flora and fauna, I decided that space botany was for me. The centre of the universe isn’t my real goal. I’m happy to make my own objectives and entertainment in the pretty sandbox Hello Games has created for me.

Unfortunately, the core gameplay, as it stands, isn’t very deep. The space combat  is flawed and boring, allowing you to be killed while in your inventory screen trying to recharge your ship and weapons. And the mining, trading and repetitive interactions can become draining as your hours stack up.

The downside of the procedurally generated world is that it can all feel a bit samey. The planets don’t have polar caps or marshes or great forests – not the ones I’ve been on, anyway. You may land on a red, rocky planet and for as far as you fly there will be red rocks. Alternatively, you may get one of the lush ones that look like the planet from the posters, but I never got the sense of ecosystems or geographical regions.

The planets do have a day and night cycle and some planets have weather, but the animals don’t seem to relate to each other, let alone you, in any way. There is predator behaviour, but it’s a rarity and you can’t use this to your advantage in any situations. There will be no Jurassic Park moment, where a threat is eliminated by a bigger threat, allowing you to get away.

No Man’s Sky is designed to be a lonely experience, but the fact that you don’t seem to make any real difference to the worlds you land on makes it even more desolate.  I haven’t encountered any nocturnal activity or even heard birdsong or the buzz of insects. In addition, the alien ships land, but nobody gets off. The ships just sit there waiting for you to interact with them and give them purpose. All this makes for a hollow experience, which makes the game seem like an indie title at a AAA price (£50/$60).

There is No Point

If you want objectives and missions, give No Man’s Sky a miss because there’s not enough here for you. If you enjoy the idea of exploring a 70s sci-fi book cover and making your own fun, then charge up your warp drive.

I must give  a moment to praise the soundtrack. Created by 65daysofstatic, the music is sometimes soaring and epic and sometimes minimalist, ranging from orchestral space rock, to synthesised choirs. It never becomes monotonous and really adds to the atmosphere.

With 20-30 hours under my belt, I’m still enjoying  No Man’s Sky. Its minimalist gameplay is strangely addictive and has me constantly wanting to wander over the horizon, just to see what’s out there. I love learning the languages and reading the strange entries from previous races and travellers. I’m hoping the story comes together and makes it all worth while, but until then I’m happy logging flora and fauna for my imaginary natural history museum.

No Man’s Sky is a beautiful game and an incredible feat, but I’m wondering if there will come a moment when I need something more to occupy my time in space. Hello Games has said that there will be free updates. I’m hoping this includes more than just bug fixes and we get more story, with additional gameplay elements and things to discover. Until then, I’m happy to wander around this beautiful world, not trying to beat it or get to the end because that’s not really the point.