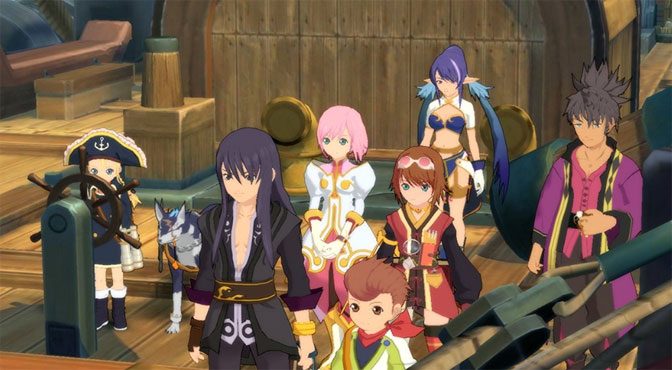 The Tales series is a long runner in JRPGs by now, so there’s a good chance that you’ve at least heard of the Tales games. With much-beloved titles like Tales of Symphonia, Abyss, Vesperia, even Berseria, Bandai-Namco has been giving storied JRPG franchises like Final Fantasy a run for its money for quite some time. The games are action RPGs at heart, using a combat system that evolves in every iteration (outside of the side games that may be dungeon crawlers or other genres), and Vesperia was a game loved by fans for its combination of competent storytelling, great combat mechanics, music, and graphics. So does the Definitive Edition of Vesperia bring this game to a whole new audience a whole generation and ten years later, or is this one tale not worth re-spinning? Let’s find out. 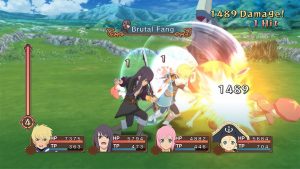 Tales of Vesperia follows the story of Yuri Lowell and his lovable gang of misfits in the world of Terca Lumireis. People in his world have become extremely dependent on a type of ancient technology called blastia, which do everything from enabling superhero fighting abilities to creating barriers so that monsters can’t ransack their towns and cities. Yuri’s tale begins in the lower quarter (the peasant district) of the Imperial Capital, as he tries to find a thief who stole the core from their aque blastia (which seemed to function as both a well, and a fountain, for the poor commoners in the lower quarter). Without the core, the blastia malfunctions and water gushes from the fountain, flooding the area and putting the people as risk of losing what very little they have. Yuri’s story does not simply end with the blastia, however, as he quickly finds himself wrapped in a plot orchestrated by the Empire. The world gets fleshed out quite a bit even in relation to other Tales games, so those who love lore should have quite a bit to enjoy, here. 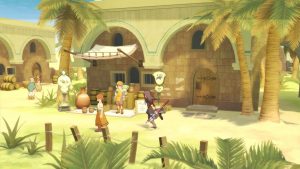 As far as characters go, Vesperia has some of the greats. They’re all relatively believable, and the ways in which they interact with one another can really stick with the player even after the game is turned off. Both humor and empathy are used in equal measure, and more than a few laugh out loud moments can come from Yuri’s stoic sarcasm or Karol’s teeth-chattering fears. Character interactions are among the things Tales is best known for after combat, and Vesperia has one of the best casts when it comes to a humorous and believable dynamic across the characters. The story has its lulls and some people may not like where it goes toward the end, but the development of characters, especially in reference to each other in skits and the like, is definitely where it’s at for Vesperia. 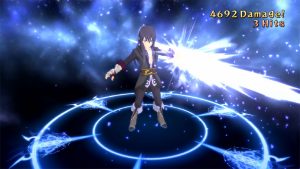 With light story details out of the way, it’s time to talk about combat. Like other Tales games, in Vesperia players can string together attacks by using one button, and then use special attacks called artes with another. It plays more like a fighting game, Super Smash Bros in particular, in how you execute special attacks by holding different directions on the analog stick when you press the button. You learn newer, oftentimes flashier artes by leveling up, or will learn new attacks that combine two old attacks together by using those artes enough times. Similarly, you can learn new artes by using specific skills that change one arte into another- like turning Azure Edge into Azure Storm by equipping the skill Chain.

[amazon asin=B07DL353F8&text=Pick up the amazing Tales of Vesperia: Definitive Edition from Amazon!]

And no, there is no indication of what artes certain skills change your artes to; it would have been nice for the added information to be in the Definitive Edition. Alas, this kind of thing was a common in older JRPGs, but at least now there are handy guides on Google with all the information you could need. 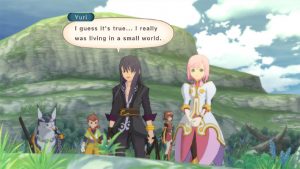 While on the subject- Skills! Skills are fairly unique in Tales of Vesperia in that varieties of weapons and sub weapons have skills attached to them that activate for long as the wielder uses them, though you can learn them if you battle with them equipped long enough. This system should sound familiar to anyone who has played Final Fantasy IX, Final Fantasy Tactics Advance, Lost Odyssey, Grandia, etc.. In Vesperia, though, characters have a limit of how many skills they can have equipped, and some skills take up more space than others. However, with this level of customization, you can essentially fine tune your combat experience how you like it- you can spend all of your points to enable backhopping, canceling artes by pressing guard, and allow you to attack 5 times in a row, or you could just lucksack your way through the game by equipping all of the skills that give characters bonus EXP, healing, and money so that you can brute force your way through the game. The skills really do allow you to build your characters just how you want them, so those adept at fighting games can include every skill that lets you cancel one move into another so you can get 200+ hit combos with ease. 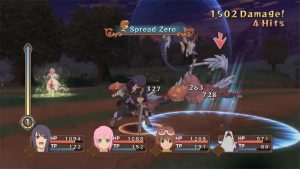 With combat and customization out of the way, time to talk about the music and graphics. The graphical fidelity of Tales of Vesperia: Definitive Edition is pretty good, as the decade-old objects have been given a higher resolution and some texture work has been done. Jagged areas are easily found if the camera zooms in, and the character models and animations are not quite as pleasant as Tales of Berseria from 2016, but that’s somewhat to be expected given that Vesperia was the Tales series first HD entry and there’s really only so much you can do with 10 year old animations. The music is superb, fitting the mood and setting spectacularly, with the combat tracks being exceptionally hard-hitting, while each dungeon’s track fits the atmosphere well. Back in 2008, you couldn’t walk without tripping over a game Motoi Sakuraba had a hand in, but ten or eleven years later soundtracks like these have become more rare, so it’s a nice wash of nostalgia for those who played it back in the day, but should be sufficiently different to stick in the mind of first-timers as well. 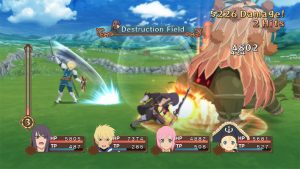 Now, for the new stuff: Definitive Edition isn’t just a tagline for a haphazard HD remake, here, that’s for sure. Tales of Vesperia originally released on the Xbox 360, but later got a PS3 port that added a new character, Patty, new main and side story content (including more story events for Estelle and Flynn, as well as tie-in content with the movie Tales of Vesperia: The First Strike), new subplots and skits, a new battle coliseum, a new dungeon, new mini-games, new sounds for the soundtrack, new bosses, new artes to use, new costumes for each character, and more. The amount of each item added isn’t small either; around 80 new skits were included, for example, and with all of the new content it may add an additional 10 to 20 hours to get through it all. All of the aforementioned is included in the Definitive Edition, and all of it is coming stateside for the first time, seeing how the PS3 release of Vesperia was Japan-only. 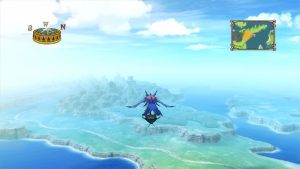 There are a few weird issues in the Definitive Edition, such as a lowered frame rate in the town of Dahngrest, among other places. Of course, no review of the game would be complete without bringing up how the dub strangely didn’t try to get the voice actor for Yuri Lowell or Judith back for this version, and considering the amount of new content added, new voice lines needed to be recorded for when the characters interact with Patty or do any of the new side content. The voice actor for Yuri changing in the middle of gameplay is… very hit of miss. Some lines are delivered poorly (such as when Yuri asks Patty if she’s just going to run away), while others sound insanely close to Troy Baker to the point where it’s not jarring at all. Those who are insanely sensitive to this kind of thing can use the Japanese voice overs, as that is thankfully included as well. 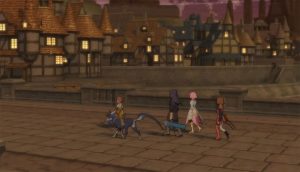 Overall, Tales of Vesperia: Definitive Edition is the version of Vesperia that players of the Xbox 360 original wanted years ago. Despite some odd frame rate issues here or there plus an odd choice to get back every voice actor but the ones for the story’s central protagonist and another party member, the game is rock solid. The game, when it released in 2008, was already good. The additional party member and story content definitely help the game out, and the added end game challenges were welcome inclusions too. Those who haven’t yet experienced Vesperia can definitely jump right in and enjoy this version, assuming you’re okay with one character changing voices for a cutscene every few hours, and even if not, the Japanese dub is available as well. If you like JRPGs, there’s never been a better time to experience one of the best of the Tales series.