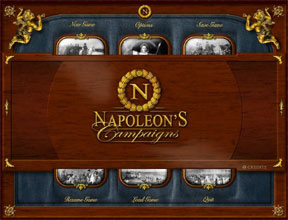 Growing up, I used to play a lot of those Avalon Hill strategy war board games with a few select friends. Some of the games were so complex that it took about half an hour or more just get them setup so we could play. I was always thinking that all that setup time could be handled automatically by a computer much better than having us try to put everything in order. And then sometimes you would get into a game pretty far and realize that you made some minor setup mistake, which would throw the entire game out of balance.

Thankfully war games like that have moved to the PC, though their complexity has kept them from becoming really popular, especially among gamers who like charging into rooms with shotguns blazing without having to think too much about the strategy behind the attack.

Napoleon’s Campaigns obviously follow the rise and fall of Napoleon as he fights the entire European world in what some consider the first real world war. Napoleon is a great political and military figure to study, both for his advantages (which were mostly strategic) and faults (which were mostly tactical).

I will say right up front that like other strategy war games, this one is not for everyone. The learning curve is more like a brick wall for most players. If you take the effort to scale it then you will be fine once you get to the other side, but getting up there will require a huge effort and also produce a lot of cuts and bruises. I knocked down the gameplay score a bit because the tutorial is not a lot of help in getting over the wall. The tutorial is kind of hard to follow and does not really do much hand holding. Had it not been for my experience with games of this type, I probably would not have made it.

The game is developed by the same people who made Birth of America and American Civil War, so if you liked those games you will like this one, and probably not have much trouble with the controls as they are very similar in most respects. It’s the newcomers to the genre who will be lost, at least for a while.

Graphically, Napoleon’s Campaigns looks really good for a strategy title. Green fields roll on forever in the top down map, rivers flow and towns bristle behind their walls (if they have town walls). Depending on the scenario you play, the maps are really big. I want to say it’s about the largest scale I have seen in a war game like this.

When looking at the map, you soon realize that it’s not just a pretty picture. When you hover over a town for instance, you can get a lot of information about it. Things like the loyalty percentages of the town and what forces are garrisoned there pop up. When you soon realize that there are perhaps a hundred towns and cities on your map, you begin to get a feel for the scope of things in the game, and for what Napoleon really did.

Before you fight, you need to get your papers in order. One screen you will spend a lot of time on is The Ledger one, where you are able to look at armies, money, conscripts, ammunition, food and water levels and your expected budget. Being a brilliant strategist won’t get you very far if you run out of any of the above.

Actually moving the units around the map is comparatively simple compared to keeping them financed. You simply drag and drop. A lot goes into the calculations as to how long it will take an army to get to a destination including the army type, the route to be taken and the condition of the roads in the area.

One area where Napoleon excelled is at training and it is nice to see this reflected here. He basically taught his men to march faster than normal by adding in an extra step in the standard move. This may not seem like much, but time and time again his armies showed up at places where his opponents didn’t think they could reach, and almost always beat opposing armies to battles, giving France a huge advantage. Here you can send your units to training, which will give them experience without having to put them in combat first. Of course combat also grants them experience, if they survive it. Your leaders are the same way, getting more efficient if they taste combat.

And there are a lot of units. In fact, there are over 1,000 different variations including all types of cavalry, cannons, ships, spies, partisans, doctors, engineers and your headquarters staff. As far as I could tell, they all looked different too, though you won’t really see this unless you really zoom in.

Amazingly, the combat interface is surprisingly simplified. You don’t really have to manage the battles. If you have organized your divisions, armies and corps, get them good supplies and provide the best leaders, then they will be difficult to beat. Of course you need to use strategy and not do frontal assaults against fortified towns or something like that, but at least you are not micro-managing your armies as they move and fight. This means you can concentrate on the big picture.

You don’t have to play Napoleon either. You can fight against him as one of six other nations. Campaigns include Austerlitz, Portugal, Prussa, Trafalgar, Russia, Spain, Jena, Germany, Friedland, France, Danube and of course Waterloo. There is even a bonus campaign that has France invading England in 1805 which I found to be really amazing to play. Whether you play as Napoleon or one of his enemies, the opposing AI is going to be solid and tough to beat. If you can conquer any of these campaigns, then you are a true strategy master.

Napoleon’s Campaigns are not for everyone, but for those of you who find this hardcore type of gaming appealing, this could quickly become your gold standard.