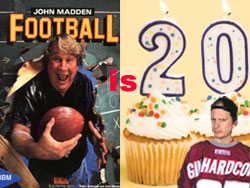 And we still love it!

Can anyone believe that it has been twenty years since Madden made his first game appearance back on the Apple II computer? I know I can't, but when I got my Genesis back in 1991, it was one of the first games that I played (aside from Sonic of course) and it was also the game responsible for really getting me involved with football.

Since then I was hooked and during my Genesis days it was the only title aside from the NHL series that I picked up every year.

That trend continued for a short time when I had my Saturn. Sure there was no Madden ’96 as it was cancelled but I did play ’97. The '98 season on the other hand I had to return because it took up a lot of storage memory, more than what I had available on my Saturn without buying a separate memory cart.

But during the days of the Dreamcast I couldn't play Madden, and it was because of EA Sports, or more specifically, the decisions of one John Riccitello. I will never forget that statement he made about "the dollar we spend on Dreamcast marketing is one less dollar we spend on PlayStation marketing." Uh wait, aren't you now making titles for the Xbox 360 as well as the PlayStation 3? Doesn't that dollar you spend on Xbox 360 marketing mean less on that for the PlayStation 3? I smell a conflict of interest. Or maybe that was because Peter Moore was able to knock some sense into you.

But during that time period while we're talking about Peter Moore, I had my alternative to the Madden series, in the form of NFL 2K and NFL 2K1. It was an impressive alternative to EA Sports' product and I was hooked on it. That was, until Sega decided to break Dreamcast owners' hearts and go software only. Then I went back to Madden, at first on the PlayStation 2, but eventually going yearly on the original Xbox.

And after that it made me realize something: I did not really care for in the 2K series, the way my receivers kept dropping passes even when they had full control of it. (If I remember correctly, isn't that considered a fumble?) That realization was more prevalent when I played NFL 2K5 as it seemed to happen during every pass. Either that, or it was intercepted.

After that happened I made the decision that I would only get Madden for my NFL game.
But soon after that, it all became a moot point when EA acquired sole rights to the NFL license. While many other fanboys went ballistic over the announcement, I welcomed it with open arms. Even today I still back up the decision.

And now here we are, the 20th anniversary of the Madden franchise, and to this day I'm still playing it nonstop.

I even did something I never had the chance to do: take the official launch day off from work and play the latest edition. So far I am very impressed with the final product, but I admit the "my skill" settings can be a pain to deal with. But there is one thing that has returned that I definitely missed"the ability to be a spectator for games! Now that it has returned, hopefully this means the return of the Hardcore Bowl after a three year hiatus. Watch out world as we will once again predict the Superbowl winners!