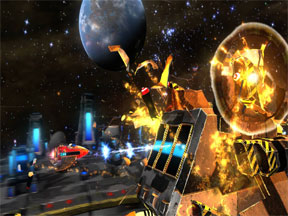 Depending on how you look at it, Retro/Grade was either created by the developers at 24 Caret Games while they were strongly under the influence of something, or a work of pure genius that could transform the stale music genre into something fun again. It’s possible that it’s both.

Retro/Grade begins literally at the end. Your character, Rick Rocket, who kind of reminds me of Commander Keen a bit, has saved the world. The final epic battle is over and the enemy is destroyed. The problem is that the resulting explosion was so large that it created a temporal rift and destroyed the world. The only thing that can save the world, again, is for Rick to fight the entire battle in reverse.

You play by flying your ship along a grid and jumping from line to line. You have to move in front of your own laser blasts, because when time was flowing forward you fired those shots, so you need to catch them or that shot won’t happen in the future again, or something like that. But you also have to avoid enemy shots because they missed you the first time, so they have to miss you once again, though you can of course take a few hits which are absorbed by shields and armor and all that, though it’s not recommended.

Retro/Grade is a little confusing, enough that it really can’t be considered a casual title. It’s kind of counterintuitive to be jumping in front of some of the sparkly bits while jumping away from others. And the whole thing with your ship flying backwards is just a bit off-putting. That said, it’s probably the hardcore gamers who have played games for years that will have the most trouble with breaking the rules. I let a non-gamer play for a while and she picked it up very quickly, not having years of shoot-and-move training to overcome in her mind.

There is an excellent tutorial at the beginning of the game that explains everything, and that’s very good. Without a slow, step by step explanation of how to play, Retro/Grade would be lost.

One of the first things you will notice once you dive in is that the gameplay screen consists of five colored lines. All the blobs of enemy and friendly fire shoot along them horizontally. Your ship moves vertically along the same lines. If this sounds familiar, it should. If you’ve played any of the Rock Band or Guitar Hero games, you’ll notice it right away. It’s like a big piece of sheet music. It even shares a similar color scheme with those games, with the green line being at the top and the orange one at the bottom. The reason for this is that while you can play just fine using the directional keys on your controller, you can also plug in your PS3’s guitar peripheral.

Playing with the guitar is a lot more fun, and more precise because you can jump right to the line you need with a single key press. It also lowers the difficulty just a bit, assuming you are good at manipulating your guitar. However, it’s completely optional if you don’t like it. I played for several hours with just the controller before switching over to my Hofner.

Visually, Retro/Grade is quite a feast. Psychedelic would be a good description. Like a Pink Floyd concert would be another. When you worry that your PS3 is going to experience visual overload, or that your graphics processor is going to melt, then you have a visually exciting game on your hands. There is almost too much eye candy stuffed into the package, but it all looks really nice, so I’m not going to complain.

In terms of the soundtrack, it’s okay, though it comes off as a bit generic. Perhaps it’s because when playing with a guitar, you kind of expect to hear some heavy rock chords instead of the kind of techno-pop you might find in a Japanese dance club.

I realize that licensing music is asking a lot of a new developer, but if we could have played Retro/Grade while a few real songs play along, it might have added significantly to the fun factor. Still, the music in the game is internally consistent and does a great job of keeping up with you as you play, so it helps contribute to the overall experience.

Retro/Grade is fun, and after completing the tutorial, probably accessible to all ages and skill levels. It freshens up the musty Music/Rhythm genre, and could become the next big party game for when guests get tired of playing Smoke on the Water yet again. It earns 4 out of 5 GiN Gems, and we look forward to seeing what those mad scientists at 24 Caret are going to come up with next.