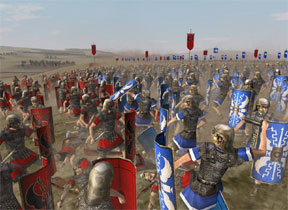 By hook or by conquest, total control of Rome is the aim in Activision’s Rome: Total War, latest in the Total War series that started with Shogun: Total War and continued with Medieval: Total War. Now you get to compete for the Title of Emperor of Rome! That is in the grand campaign game. There are also smaller campaigns and individual battles that can be played when time for the long campaign is not available. Plus, the individual battles can be run with a total of eight players on the Internet or via a local area network (LAN). So pick the way you want to have fun with this rather impressive offering from Activision.

Loading, installing and verifying my CD code was a flawless matter accomplished quickly and efficiently. Then you fire up the game and get to watch the intro video. I always watch that the first time I play a new game to kind of get me in the spirit of the game to be played. Then it is off into the introductory tutorial that walks you through the basics of the game from town management to the conduct of field battles. In play style this is somewhat of a cross between Civilization and your favorite RTS (Real Time Simulation). It is run in discrete turns so technically it is a turn based strategy game which works quite well in the feel and flow of the game. You will get to manage your cities, rebuild and manage those you ‘take over’ during the course of the game and conduct battles that can either be resolved on a tactical field of battle with you in charge of all aspects of your troops or via a computer running ‘quick’ resolution of the fight based on troops involved.

For me it was always the up close and personal tactical resolution of each battle. One of the memorable moments for me in this game was the first time a besieged city sallied forth to do battle with my encircling force. Up until then it was merely a matter of waiting out the defenders in a siege and taking the city and thus the province without a fight. But this time the defenders had the nerve to come out and bring the battle to me!

All of a sudden I was taken from the siege screen to a tactical battlefield with the besieged city in front of me. While I was trying to figure what was happening the gates of the city opened and the defenders started forming up on the field outside the gate. Seeing the defending forces stream out of the city and form up to face my waiting troops for the first time was enough to make me just watch and enjoy instead of readying my troops for the coming battle.

The main game screen is a map of the Mediterranean Sea area centered on the Italian peninsula. The area is broken up into the various provinces of the time with a single city in each province. Movement is not area based and troops will follow a road or path to their destination and will only stop to do battle when they physically come into contact with an enemy force. This allows forces from several factions, friendly and not so friendly, to be in any given province at any given time. It also allows you to block movement by manning strategic positions such as mountain passes or river crossings. You can also hide in the forests along side the roads to ambush an unsuspecting enemy force, in which case the defending force will start on the tactical map in column formation while you are in battle formations and taking him by surprise.

But be warned: The artificial intelligence (AI) does a very good job of taking full advantage of the differing troop strengths while exploiting the weaknesses of your troop formations. However, the AI is not very adept at maneuver, so can be outsmarted much easier than a human opponent would be.

That brings to mind the multiplayer formats available for this game. Both online and hot seat battles are available for up to eight players. The online variations can either be via the Internet (GameSpy) or on a local area network (LAN). In either case, the full impact of Rome: Total War is best felt when playing the unpredictable humans face to face!

While the grand campaign game is by far the most fun, it takes a long time to complete and is constantly keeping you on your toes with ‘requests’ from Rome to do one thing or another coupled with an extremely tight time limit on getting it accomplished for maximum notoriety in Rome.

The game is pretty straight forward to learn and anyone who has played a few turn based games like this will most likely be able to jump right in and play without going through the tutorial. I have a very short memory (limited primarily to the games I am playing at the moment) so always welcome a good tutorial to get me going quickly in a new game world. The tutorial included with Rome: Total War falls into this category. You will run through a small campaign game for a few turns, take over a few provinces, build a few troops, fend off an attack or two and basically get walked through the first turns of a campaign game. Even after the tutorial there is an in-game advisor function that can assist you in making decisions as to what to build next in a new city or which type of troop is quickest to build at a given city. All in all it’s a fairly simple game to get into, but not all that simple to be successful at.

But everything looks so nice and sounds so nice that you will not mind the learning curve as you get better at control and conquest in the time of Rome!

You have three differing factions of Rome to choose from as you start any campaign: Julii, Bruti and Skipii. They all start off as friends and you all start off with a single province under your control and a certain number of troops at your disposal. You will get a mission from Rome that normally takes the form of teaching some upstart province who is boss by besieging their city and taking control of the province. Successful completion of these missions will gain you favor with Rome that will become most essential when it comes down to the final Civil War for ultimate control of Rome. But until that time you live peacefully with your fellow Roman factions and have your hands full with the various and sundry enemies of Rome.

When it comes to actual battles, ie: when two opposing forces collide with each other, and you decide on tactical combat over a quick sim, you will be taken to a blow up map of the region you are fighting in and will have your troops at your disposal for command. You will also see the enemy troops as they maneuver and ready for combat.

Controlling your troops is as simple as left click to select a single unit (you can have up to 20 units in any given battle) or group several units together for ease of movement and select them, and then right click on the destination be it a terrain feature or an enemy unit to engage.

After giving commands to all your units you can either sit back and watch them go into action, thus being able to fine tune troops positions or movement to the maximum extent or zoom in and follow a certain unit into battle.

This zoom and follow feature I used a lot especially to see my Cavalry in action as it swept across the field and closed on the hapless Archers left unprotected. But do not get too carried away with watching your favorite unit engage in battle as units will continue to follow instructions even if that means following a retreating unit back to a waiting ambush set up by the AI.

All in all, Rome: Total War is a very fun game and well deserving of the four and a half GiN gems awarded to it. It’s a fine addition to any collection and a must have for any serious military simulation enthusiasts out here!