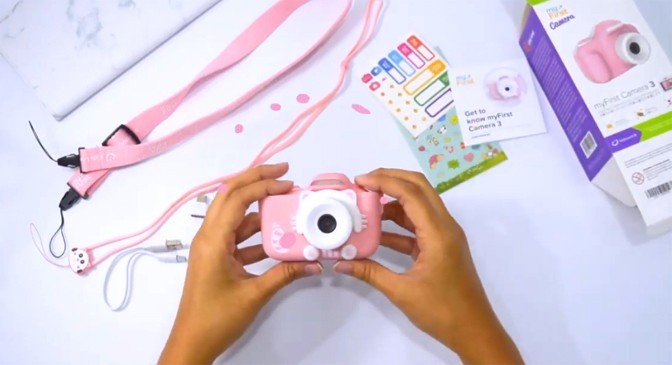 The folks at Oaxis are back with a new tech toy for kids, an updated version of myFirst Camera. I reviewed myFirst Camera 2 last year. You can read that review right here.

The myFirst Camera 3, doesn’t have the built in thermal printer, which I definitely see as a loss, but it’s smaller, and has more megapixels, this time up to 16M. It also has a selfie setting and a macro setting, both of which work well and look good. You can also shoot video with it, and since it can take up to a 32GB micro SD card, that’s pretty impressive, but it comes with a 4GB card right out of the box.

Basically, even though it’s meant for children, this is a pretty good little camera. It comes with a cute shockproof, removable, silicon case and is a pretty simple point and shoot camera. That being said, naturally, the younger the child the more assistance they will need in learning how to switch between settings. However, this is a great opportunity for children to learn that they can figure out technology by just pushing one button at a time and seeing what happens. It’s always nice for them to learn that on something that isn’t your brand-new expensive phone that might end up with them purchasing a lot of in-game microtransactions or is that something that only happens with the children of gamers?

The camera is recommended for children over three because it comes with some small adapters for connecting to laptops, including one that worked with my MacBook Air, which was nice. Those adapters would be choke hazards for toddlers though. As long as your child is past the put-things-in-their-mouth stage three or four would be fine as long as they are able to hold the camera steady and understand what it’s meant to do and there is a parent around to help when needed.

Even kids as old as six or seven though are probably going to need help with understanding all the instructions. Because My First Camera 3 has more functionality than its predecessors, it’s not quite as easy to understand everything it can do, so parental intervention is probably inevitable. Also, because it no longer has the instant gratification of the thermal printer, the camera has to be connected to a computer to print the photos or just to see them larger than they appear on a 2×2 inch screen, which at least for the youngest children, is going to require a parent’s involvement.

My only warning is that this camera makes a lot of little noises, which I know kids love, but it started to make me a little crazy while I was reviewing it.

All in all, this is a great little camera. The silicone case makes it easy for little hands to hold and it comes with a lanyard so they can wear it around their neck. It’s fun for the kids and a lot better than handing over your phone every time they want to take a picture. Check it out and let us know what you think.