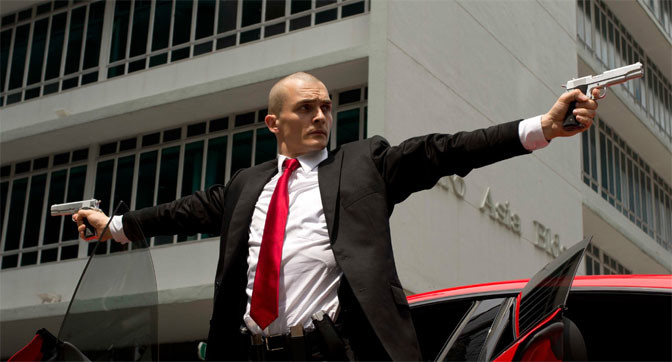 I’ve pretty much loved the Hitman game series since the beginning, and have followed every incarnation of that title though the years. When it first came out, IO Interactive presented us with a shooter unlike any other, where you actually had to think your way through the levels which were nearly impossible otherwise. You were also tasked with killing a single enemy, not every bad guy on the entire planet. Granted that target was always very well protected, but there were ways to get to them using clever means as opposed to outright running and gunning.

The series has had its ups and downs over the years, and now is going to begin life anew as a series of episodic adventures, the success of which is yet to be proven. But overall, Hitman has been a very exciting and successful videogame series. So it makes sense that such a great adventure for video games would become a movie, at least it makes sense on paper. Movie adaptations of video games have been less than amazing over the years. They tend to range from the questionable like Wing Commander, Silent Hill or the Final Fantasy movie to the outright bad like Alone in the Dark or even Postal. Sadly, the original Hitman movie starring Timothy Olyphant in 2007 nearly fell into the latter category.

Now Hollywood is trying again with Hitman Agent 47, featuring an entirely new cast, a new plot, and a new approach to portraying the videogame character in film. I have to admit that I was pretty skeptical at popping that Blu-ray into the machine this time around, which was recently released. Despite the studio’s PR people telling me that this was a good homage to the videogame, I was a bit scared at what I would find. The truth is that there are some rather amazing movies out right now featuring hitmen. I believe that Sicario, for example, should be considered for an Oscar. It’s really that good of a movie.

Knowing that Hitman Agent 47 would not rise to that level, instead I was hoping that the movie would at least properly capture the flavor and feel of the videogame. And for the most part, it does, at least in certain scenes where they specifically set it up to do so. I can live with that. I realize that no movie is going to have the main character watching guards and planning an assassination for hours on end. That’s just too boring, and long, for a movie format. Instead we get to see the tail-end of Agent 47’s plans, the execution of them, and have to assume that a lot of behind-the-scenes planning went into everything.

This time around Rupert Friend plays Agent 47, and he does a much better job than Olyphant at capturing the psyche of the engineered killer. There are a few of the Data-from-Star Trek moments where he contemplates wanting to be more human which was absent from the first movie, though it never gets over the top here. I have to say that I’ve always pictured Agent 47 as an older gentleman, a bit more grizzled and experienced, and both Friend and Olyphant seemed a touch young. But at least Friend seems to have the role down.

In a surprise move, and speaking of Star Trek, Zachary Quinto takes a starring role in Hitman Agent 47 as an assassin from a rival syndicate. Quinto’s character is not engineered like Agent 47, but has some surprise modifications that make him into one really tough opponent. Several times during the movie you think he is dead, only to have him return later thanks to his enhancements. The addition of Quinto adds a lot of star power to the movie, and he does a great job in his role as a foil for Agent 47.

Hannah Ware rounds out the cast as a young woman who is the key to restarting the Agent program. She is the daughter of the founder who made the program, and everyone is trying to capture her to get to her father in hiding. Of course it turns out that she too is a potential assassin, and she and Agent 47 team up even though he is originally supposed to kill her. Ware was amazing in the Starz series Boss and good as Sara Hanley in Betrayal, and she really shines here too. I think she gets more beautiful as she gets older. She is well-cast here, and gets to show off her beauty, athleticism and acting prowess.

In terms of how closely Hitman Agent 47 sticks to the video game, it’s pretty good in places and goes way off the rails in others. There is one part where he walks into an American embassy that really mirrors the famous mission from the series where he has to infiltrate the White House to kill the Vice President, right down to the costume changes he makes in the movie. That set-piece type adventure could easily have been taken from the game. At other times, he is running and gunning Hollywood style and taking on multiple opponents in running gun battles that is very out of character for Agent 47, and would likely have resulted in Game Over screens for players attempting the same thing. There are also car chases in the movie which of course never happened in the game.

I realize that action movies need to have such things to appeal to a wider audience, or even people who don’t know much about the Hitman game. I am just happy that some of the other stuff that is more closely tied to the game appear as well. The settings are also rather exotic and beautiful, which takes a page from the game as well. In fact, it seems like the director really tried to appeal to videogamers. It’s almost like we are treated to inside jokes for being fans of the game, which is far better than being ignored in favor of the check boxes that mainstream movies apparently need to have.

In the end, Hitman Agent 47 is a good movie. It’s not great, but is good for an action flick. Those of us who love the videogame series will like the movie a lot more than those who don’t, which again, is really different for a videogame adaptation. I would go so far as to say that I hope that there are more movies like this one made, and hopefully with the same cast. Friend deserves another go at Hitman based on this performance, Ware’s character is just coming into her own as an assassin, and even Quinto somehow survives, so it’s possible.

While Hitman Agent 47 is probably not a huge hit, it is a fun movie that respects the source material from the game. It’s certainly worth watching, especially for fans of the game.