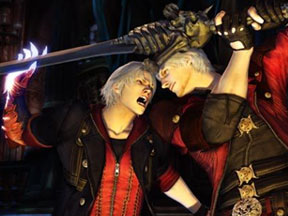 While Devil May Cry may not be a franchise kept on my radar every minute of every day, whenever a new sequel comes out, my ears perk up and I remember how much fun I had sitting in front of my television for a solid week busting up bad guys and learning new techniques and abilities. Now it’s time for the fourth installment of DMC, so I readied myself for what I expected to be a gorging of video game junk food with my favorite demon Dante.

Only there was no Dante. Yes, it seems that Capcom has pulled the switch on us, much like MGS2 did with the first part of the game featuring a long haired Raiden.

Instead of Dante at the helm, Nero, a kid with a glowing arm that kind of looks like Dante, fills the role of protagonist. Nero is a demon hunter and knight to the Order of the Sword, a group that worships the demon Sparda as a god and has fought to protect mankind from threats.

In contribution with the running theme of the DMC series, Nero is a sarcastic, orphaned loner with way too much self-confidence and a hint of inner turmoil just under the surface. Unreachable to many people, Nero harbors a crush on one of the Order’s songstresses, Kyrie, which makes him more relatable to the rest of us.

During the opening sequence of DMC4, we see Nero rushing to one of Kyrie’s performances while cutting down a street full of enemies, making it just in time to catch the closing of Kyrie’s song to the Order.

Then, just as the Order’s leader, Sanctus, gets up to address his followers from the main pulpit, a man breaks through the glass ceiling and shoots the holy man at point blank range. That gunman looks a lot like Dante, and as the game begins, your first task as Nero is to take the assassin down. After that, there’s a ton of fighting to be had through a world that is visually stunning and that harbors a large number of secrets and power ups.

The only problems that I really have with DMC is the repetition that tends to fill every game in the series, but this also proves to be one of its major strengths when it’s all said and done, mainly because DMC has always been, in part, a points counting game.

There are also multiple difficulty levels and unlockable features to uncover within the game, but nothing, sadly, that beats what was found in DMC2.

As far as gameplay is concerned, with Nero you have the ability to take enemies out with a revved up sword called the Red Queen, his double barreled revolver the Blue Rose, and his newest feature, a strange, glowing right arm that often embarrasses him. Called the Devil Bringer, Nero finds that his arm may be used for more than just an alternative light source, as it crushes demons and shoots out with a type of grappling feature.

For those of you panicking that Dante is completely left out of the gameplay, fear not. The sassy demon comes into play halfway through the game, and he brings back all the old styles that we’ve learned to enjoy, plus some new toys to play with.

By the time you’ve bought all the moves available, there are well over a hundred moves to learn between the two characters, and using them in the game is extremely rewarding.

The difficulty settings for this game have also been updated to accommodate both newcomers and those wanting extremely demanding levels. This is a feature that I think all games should supply, but so many developers overlook.

The DMC4 story is pretty effective in keeping a player entertained as well, taking just enough from the previous storylines and giving new characters, twists, and developments to keep us interested. There are also quirky throwbacks to influential themes and interests that seem strange (at times even awkward), but also very endearing.

The cut scenes are visually amazing, reminding us just how far the animators can go to put on a good show, but what’s even better is that the in-game graphics looks just as smooth, stylistic, and detailed. However, this kind of success has been no stranger to this particular franchise.

In providing consistently good games, DMC has always been one of the highlights of the action/adventure/slasher genre, and with this fourth installment, it keeps up with its own legacy and has its fans looking forward to the future.

This is just one of the games that has enough of a following to put the PS3 back on the map, and if the others (Metal Gear Solid, Resident Evil, Silent Hill) have got what it takes to stand up to the challenge like DMC has, then this could be the coming of a great time in gaming.

Oh, and in regards to the 25 minutes that DMC4 takes to update itself onto the PS3: Get over it. Go read a short story by your favorite author, do some household chores, or get some exercise. Just don’t complain, because really, it’s not that big of a deal and certainly a small price to pay for a good game.