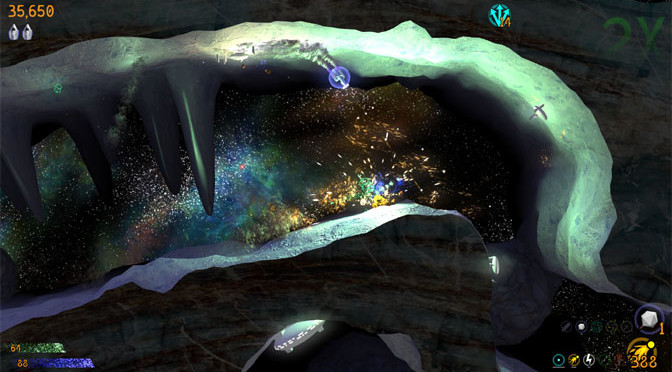 Retrobooster does exactly what it promises. The game is a cave flyer that puts you, the player, in control of a spaceship that looks startlingly similar to a Gunstar from the Last Starfighter. The resemblance was so striking that I had to take a break from playing the game itself to go re-watch the classic 1986 film, which may have been the best part of reviewing this game.

Largely, the challenge in the game comes from the difficulty of flying the level, and make no mistake, this game is set on 1980s difficulty, and deaths by crashing are more than a little likely. However, on top of dealing with the flight difficulty, the game presents puzzle challenges, usually in the form of fairly standard moving force field puzzles that create hazards for your ship, and occasionally, the player runs into machines or aliens that will blast the ship’s shields.

The game’s physics engine is its real selling point. The ship moves like it would were it actually in space. Your ship does not ever stop, and as a player, you learn to anticipate how long the player needs to burn your engines in order to send your ship in the correct direction at an acceptable velocity. However, the learning curve to reach this level of skill is fairly steep, and because the ship takes increasing amounts of damage based on how many times the player crashes it into the walls of the course, so the player may spend a significant amount of time in the early stages of gameplay dead. The ship doesn’t have a stop button, so the player has to make these decisions in real time, learning as he or she goes, which also contributes to the steepness of the learning curve.

I similarly liked that the game has comparatively small footprint and relatively low machine requirements, which is impressive, as the game promises 20 plus hours of game play. The game is also priced appropriately at $17.99 after release for that amount of game play. Some of that 20 plus hours may be attributable to the option of replaying levels at higher difficulties, which has its own appeal.

In addition, the game gives the player the option of playing with or without a mouse, so Retrobooster is a solid game for airport waiting area amusement.

Personally, I felt that the controls were a little clunky. Part of the realistic physics engine means that the ship is not as immediately responsive to your commands as perhaps one would want it to be. There are a lot of keys to remember, contributing to the aforementioned steep learning curve, and the game is not sensitive to the creation of muscle memory for the controls.

The shields are activated by a separate button, for example, meaning that the player has to anticipate the collision and implement the shields. This facet gives the player the option to balance the limited durability of the shield with an acceptable level of ship damage, but it was an aspect of the game that I found jarring.

In terms of the game play experience, the graphics are solid. The designs are not terribly innovative or interesting, but they are very clean and do not detract from the overall experience, especially for such a small game. The explosions are nicely rendered, and as I spent a fair amount of time exploding, I had plenty of opportunity to observe them. The music is exactly what one expects and is also powerfully reminiscent of a 1980s experience, so I kept it muted.

Overall, Retrobooster is nostalgic for the cave-fliers of the 1980s and is a challenging take on that genre. If that’s the sort of game that appeals to you and you find yourself interested in indulging the same nostalgia, you will really love the look, feel, and difficulty level of the game.