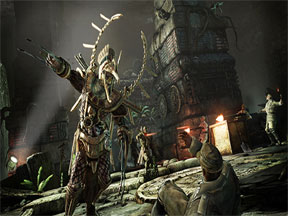 Who here has ever wondered what it’d be like if a game was published with elements of Tomb Raider, Uncharted and Alan Wake in a first person view, alongside theatrical elements from movies such as Indiana Jones and The Mummy? If you have, then Deadfall Adventures is probably going to make your day, or potentially month if you haven’t really been doing anything.

Deadfall Adventures takes place immediately before World War II, casting you in the role of James Quartermain who is the descendant of a significantly-more-famous-and-crazy-adventurer named Allan Quartermain. Some may recognize Allan Quartermain’s name if you’ve ever read the novels by H. Rider Haggard, and several of the fictional character’s, "Crazy stories" are referenced by the in-game dialogue.

Alongside James Quartermain is Jennifer Goodwin, an archeologist of some renown who is single handedly thrust into the action by a series of events and then forced to wander through tombs with the player. The story begins with Nazis taking over an archeological dig for the Heart of Atlantis, which is apparently supposed to have some kind of power that they want, and they trick the main characters into leading them directly to half of the artifact. After some dialogue is exchanged and some notes taken, the ceiling caves in and forces Quartermain and Goodwin further into the tomb where they discover that mummies are being reanimated for the purpose of fending off intruders…Basically the characters are forced into the tombs by circumstance, giving you, the player, the perfect reasons for shooting both the undead and Nazis (not undead Nazis, though, you’ll have to buy Call of Duty for that, I think).

Thankfully, Jennifer as an AI companion can handle a gun when she’s not stuck running into a rail (and thereby absent from combat) or running around in circles breaking ancient pottery. There’s plenty of combat in Deadfall Adventures, pitting the player against Nazis (because who doesn’t like to shoot Nazis) and mummies alike, and while Jennifer isn’t going to do all of the heavy lifting if she’s not stuck somewhere, she can in fact help weed out the enemies when bunches of them burst through walls…or ceilings…or sarcophagi.

An interesting mechanic is that players can focus their flashlight on a member of the undead horde, stripping away their resilience to damage so they, initially, will die to only 4 or 5 bullets. The flashlight mechanic operates about the same way it did in Alan Wake, except the mummies and skeletons can be damaged without it, though it’ll take quite a few more bullets which can be a big deal if you’re surrounded.

The animated dead really just come from about every orifice of the tombs, usually opening up a new path to collect some item to finish many a various puzzle. Enemies really only serve as simplistic obstacles, as the Nazi enemies will simply stick to cover and take potshots at Quartermain, while the mummies and skeletons will be satisfied by just collectively shuffling toward the player. Once the game begins throwing a good number of foes at you simultaneously then there is a little bit more fun to be had in the shooting mechanics, but until then the player just need to shoot when the enemies poke out or backpedal, depending upon the foes at hand.

Puzzles are also quite prominent: It’s difficult to go a minute or two without stumbling across a mirror to turn to focus light onto a statue or perhaps stepping on tiles in such a manner that you don’t skewer yourself with spears. Falling platforms, rocks, turnstiles and ceiling traps are all present and are relatively easy to solve, even on the game’s hardest difficulty setting for the puzzles. While the lack of difficulty is by no means a bad thing, since it means that players of all types can sit down and enjoy the game, the inclusion of difficulty settings should do a lot more to obfuscate the goal and confuse the player as to enforce a different method of thinking. Instead, sometimes an extra piece or two gets added to a puzzle and that’s about it. So, if you were expecting something to mix your mind up or make you think with portals, this game may disappoint, since previous puzzles in the game and proper use of the notebook should explain things that later puzzles will browbeat the player with, such as how tiles with the Eye of Horus on them are basically the only safe tiles to stand on in a puzzle room or when you’re trying to grab a treasure.

Of course, the puzzles and combat aren’t the only draw either, as the game makes large attempts to explain to the player early on that they should explore each inch of the tombs for treasure, and made treasure hunting such an integral part of the game that Quartermain’s skills can only be improved based off of the number of treasures the player has collected.

The treasures tend to be generally easy to find, sometimes requiring the player do a running jump or multiple jumps in succession without falling into a pit of swords or spears, while others are protected by various puzzles that the players first have to figure out before they can snatch up the object. Of course, nabbing up the treasures doesn’t serve as some kind of educational lesson a la Tomb Raider 2012, so it’s really best to just view them as hidden skill points throughout the environment for which investigative players can be on the lookout. Overall, though, this game tends to be a little on the linear side, so finding the treasures isn’t much more difficult than just looking in the other hallway in a branching path.

One solid nod for Deadfall Adventures is it’s excellent use of textures and lighting to have an overall fantastic visual appeal: The lighting effects creature the perfect visual flares, without being too much or too little, and the textures on all of the objects are well rendered too. The scenery, both indoor and outdoor, is very well done and there were no graphic stutters or glitches at max settings, and when turned up the highest, the ambient lighting does a fantastic job of illustrating that the player is in a tomb.

The sound direction could have used a little more work, though, because while the sound effects are great and use a 5.1 speaker system well, the voice acting is pretty horrid. It’s not Arc Rise Fantasia bad (Mr. L’Arrrrrrrrc!) or Resident Evil 1 (Jill Sandwich) bad, but the acting is still pretty lifeless and unsatisfying to listen to any of these characters speak. Matched with the weird character animations and even more awkward facial expressions, and you have unintentional moments of hilarity.

Overall, Deadfall Adventures isn’t a bad game by any metric. It’s no masterpiece, but it manages to mesh a lot of different gameplay styles and elements into a single package without significant problems. The largest issue with the game would be that it’s just about average: There’s nothing in this game that players couldn’t experience in a different title, most notably Uncharted 2, Tomb Raider and Alan Wake, but the game is at least worth a look for those who have already enjoyed those games since so many play elements of them available in one package.