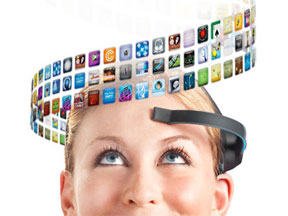 When we were first shipped the Mindwave Mobile Brainwave Headset, we were pretty skeptical. Here was the promise of controlling a game with just your mind. But how could such a thing be true?

The controller itself is unimpressive looking, not the kind of future tech you would expect to find inside a mad scientist’s laboratory. It’s a little over three pounds and looks like any other headset, only there are no speakers and no microphone. It’s three pounds, mostly made of grey plastic, and runs on three AAA batteries. To say that I didn’t think that such a device could read my mind was an understatement.

Once you get it put over your head, you position a little arm bar against your forehead. This is kind of like putting a microphone in the correct position, but it’s actually touching your head with a little sensor block. You then have to attach a tiny alligator clip to your ear, which I’m told completes the circuit and makes the reading of your brainwaves possible. The clip is a touch uncomfortable, but those people used to wearing earrings probably won’t have a problem. You don’t really feel the bar against your head very much, though it can slip out of place somewhat easily.

The headset was tested with an Apple iPad, but it also works with Android tablets and even PCs. For most PCs to establish the needed Bluetooth connection, you have to first plug in a dongle to a USB port, but besides that it essentially works the same regardless of platform. Once you’ve paired the connection from the headset to your device of choice, you need to also install the software and the games you want to play.

The first thing you will probably do is run the tutorial to get used to the headset’s capabilities. I talked with NeuroSky and found out that the headset has the ability to read two main types of brainwaves. Alpha waves are generated by people when they are relaxed. Beta waves happen during moments of deep concentration or even stress. And everyone pretty much generates the same types of waves, though depending on your personality, you might be better at generating Alpha or Beta waves.

It took me about 20 minutes to figure out how everything worked. You do this by concentrating on things like math problems, and also by trying to relax. You are not really training the sensor, but instead it’s kind of training you. Anyway, it all comes down to just thinking, so it’s not too difficult.

After that I started to play some of the games in the starter pack that comes with the headset. My favorite is one where you are running Parkour style and at different points you have to ‘hit critical’ jumps, which is done by generating Alpha waves. It’s pretty cool because I started out not very good at it, but repeated plays got me better and better. Eventually I had mastered a running game and didn’t even have to touch a keyboard or a controller. How cool is that?

I had a lot of fun with the included games, but turned to the iTunes store to find some others. I was happy to see there are about 100 titles that are either designed for the Mindwave Mobile Brainwave Headset, or compatible with it. Most of them are kind of simple in nature, though the ones I played were fun. And you can get better at them with practice.

The only thing negative I can really say is that the headset is expensive. Paying $130 is a lot to ask of a player. Yes, it does enhance games and lets you play in a new way that you’ve not experienced before. And yes, the technology is really cool. But the games themselves are mostly simplistic in nature. You are not selecting units in StarCraft or controlling your character in World of Warcraft. As fun as the available games are, I got kind of tired of them fairly quickly. Most of them were on sale for a few dollars, or even as low as .99 cents, so at least there is a big variety.

On another note, I think this could be a great tool for kids with ADHD and other attention problems. It’s a fun way to teach them how to focus.

While the Mindwave Mobile Brainwave Headset shows the possible future of gaming, I think it’s not quite ready for primetime. NeuroSky has a robust developer program, and as that community learns more of the ins and outs of direct mindwave control, we could see some pretty amazing things. Until then, if you have the money, give it a try. For what it’s able to do, it works surprisingly well.