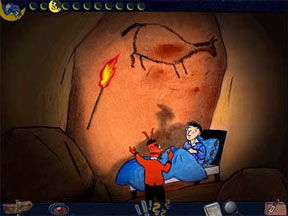 To test out a game aimed at kids trying to make sense of math, GiN enlisted someone from the game’s target audience.

Hi, I am a 12 year old seventh grader but I take eight grade math, so I’ve played a lot of math oriented computer games. My dad always gets me math games because he wants me to be really good at math (he’s a mathematician). Unfortunately, most math-learning programs I have played are much too kiddy for their age group and teach nothing. Therefore, I expected very little from Viva’s The Number Devil. I was pleasantly surprised though, when I started playing The Number Devil.

You play a boy named Robert who is hopelessly lost when it comes to math. He is visited by the Number Devil who appears in his dreams for 10 nights. During that time, he learns how fun math can be.

Each night Robert appears in a different environment such as a forest or a beach where the Number Devil teaches one lesson to Robert. At the end of each lesson there is a simple game that tests your knowledge on the lesson of that night. There is also a secret eleventh night but you will have to play the game to find out.

The game tries to make math fun by including jokes which are so corny they were funny. For instance, the game uses the alternate word “rootabega” for a square root.

I learned many little tricks and other mathematical theories I never knew before like the Bonacci Numbers and the Triangle Numbers. The Number Devil himself and Robert were talking almost the entire time and it was really like being in a virtual classroom. I like the way the game explained everything so that anyone could understand it.

I like the fact that the sound is really clear. I find some games at this level can have a “radio” sound. I also think the introduction song is really catchy and what I would call it “spiffy.”

The voices are also cool. Robert has a weird Spanish accent, which I found was a nice touch.

As far as graphics go, I was not very impressed at all. The entire game was 2D and it looked as if it was done in crayons. I guess this was the style, but I thought it could have looked better. The movement in the game was very limited and the characters did the same motions over and over again. Robert’s teacher’s big bouncing Adam’s apple was funny, though.

Another thing that I did not like about the game is that you cannot pause it while in play. You also can’t go back to a specific point in a level/night. You have to go through the whole thing again if you leave it. The game itself is quite short; I probably could finish it in a day if I had that much time.

In all though it’s a pretty good game. I would say it is more like having a funny teacher than playing a game because + of the game is just the devil and Robert talking. I would recommend this game to struggling-with-math students in grades 5-7.