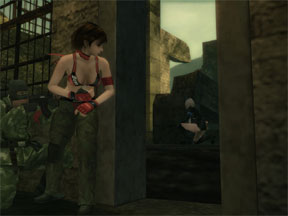 When Metal Gear Solid 3 was released on the PlayStation 2 back in 2004, it was a title that I held with very high praise. Not only was the gameplay worthy of the Metal Gear Solid name, but the storyline was much improved from the confusion of MGS2, with by far the best ending that I have ever seen in any game. It gave us an understanding of who the mysterious Patriots organization was, and also provided us with how Big Boss obtained his legendary status.

Now with MGS4: Guns of the Patriots scheduled for release on the PlayStation 3, Kojima Productions continues their tradition of director’s cuts. First there was MGS: Integral (which was only released in the US for the PC; the PS2 got MGS: Virtual Missions,) then MGS2: Substance, and now MGS3: Subsistence.

The main element of Subsistence Disc 1 is the original Snake Eater campaign. I won’t get into detail again over the main story line. If you need a refresher, you can just go here (link to my previous MGS3 review here) and see for yourself. But what I will mention here are all the new features found in the game.

To start off, the camera is now fully controllable. With the addition of the third person camera, it is now possible to look everywhere, as opposed to the overhead perspective of before. While the original overhead camera can be selected as an option, once you go with the new viewing angle, you’ll never want to go back.

In addition, there is the new "European Extreme" mode. If anyone wants a true stealth challenge, try playing a mode where being detected just ONCE ends the game. That’s right, no calling for backup, no shootouts, no hiding for cover. You’re caught, you’re dead. Time Paradox. No Les Enfants Terrible Project. No Solid Snake. End of story!

Disc 2: Persistence is where the real fun begins. To start off, after nearly 20 years of Metal Gear goodness, we now have Online mode! Playing as any of the MGS3 characters, take part in different online scenarios such as a Sneaking Mission (one soldier vs. an army), Capture the Kerotan (similar to Capture the Flag,) Rescue mission (one team attempts to recover a GA-KO while the other one prevents its capture,) Team Deathmatch (self explanatory,) and a free-for-all deathmatch (again self explanatory.)

Secondly, there is Duel Mode. Want to relive some of the best battles in MGS3 and see how fast you can beat them? Now you can relive the entrancing battle against The End, or the emotional fight against The Boss all over again.
The hilarious Snake vs. Monkey parody makes a return with two brand new stages, and while it’s a simple diversion, it’s always fun to play.

Secret Theater features several new cutscenes that have been created a stir over at the official MGS3 websites. While many of them can be considered controversial, and border on self parody, they are a hoot to watch. One that must be watched is Metal Gear Raiden: Snake Eraser, a spoof of not only Metal Gear Solid 3, but also The Terminator. Jealous over his lack of popularity, Raiden vows to change the past and stop Big Boss with hilarious results. All I can say is watch out for Volgin in the jail cell, Raiden!

But for those who have been aching to play the original MG titles as they were meant to be played, MGS features BOTH MSX versions of Metal Gear and Metal Gear 2: Solid Snake. Keep in mind these are not the inferior NES version of Metal Gear and that travesty Snake’s Revenge that Kojima had no involvement in. These are the games that changed the course of action titles forever, and it’s about time they came to the U.S.

While my review copy was the original MGS3:Subsistence, there is also a Limited Edition that featured a third disc, Existence, consisting of an edited and remastered three hour theatrical version of the MGS3 storyline. In addition, there is also the official TGS trailer for MGS4: Guns of the Patriots. No longer shown as a subpar web video clip, the trailer can now be seen in its original quality.

Needless to say, Kojima has taken the idea of a director’s cut to a whole new level. I mean, just providing us with MGS3: Snake Eater with the new camera would be enough to warrant a purchase, but with all the new features, online mode, and replaying classic MG titles, and we are looking at an MGS fan’s dream come true.

Oh and did I mention it was at a value brand price as well? Who could ever pass this up? It earns a perfect 5 GiN Gems.