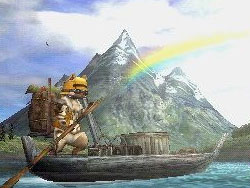 I’ve never been one to get involved in those games that people just tend to play to level up and reach some experience-driven goal with no foreseeable payoff at the end. The kids in Asia see these types of games as the paramount genre in the gaming industry, but it never stuck with me since I usually fall for a plot before gameplay.

Because of this, I’d never noticed any of the previous Monster Hunter titles, let alone played any of them, so MHF2 was my introduction to the series. I’d heard the title sold like mad in Japan-breaking its predecessor’s record, which was also extremely high-and now it’s here to suck in our gaming youth like so many earlier Japanese creations.

Obviously, MHF2 has some very luring features, but there are also some flaws that are not easily overlooked too.

The game starts off by giving you a limited character creation menu. Skin color, facial structure, sex, voice, clothes, and hair style are all changeable to a certain degree. After your character is set up, the real fun begins"or not.

The truth is, I like to get into the action and start feeling my way through the world when playing a game. That said, you can imagine my dismay when not only did I have to go around figuring out who did what in my village, but I had to discover all this by reading through large amounts of character dialogue.

There were a lot of sleek X-pressing maneuvers while I skimmed through the vast number of messages popping up on my screen, but after a while the game finally started to reveal itself.

The village in whose name you find your character hunting is filled with people eager to sell and buy goods, and every once in a while you’ll come across one of the many cats that can talk. These cats, aptly named Felynes (sigh), give you tips on side tasks like mining, gardening, bug-catching, and fishing (sadly, my favorite). They also cook for you if you’re so inclined.

Once you’re through the training school you get to start paying contract fees and accepting quests, which is all very business-like.

And that’s the game. Apply, rinse and repeat.

I found the fighting nearly impossible with anything but the Bone Scythes, but I’m sure there are some younger gamers out there that could wipe the floor with me using any of the other weapons. There are advantages with the gunlance and the different types of ammunition used with the projectile-firing weaponry, but these are far from my first choice when given the option.

It’s also interesting to notice the mundane things the developers added to the game, such as the dulling of swords as combat goes on and the use of whetstones to keep the blades up to snuff. There’s something to say for adding touches to make a gaming environment seem more in depth, but sometimes games can take this stuff a bit too far.

Now, I know that this review has had some pretty negative aspects, but the truth is that there are a lot of features that make MHF2 worthwhile.

The look of the game is absolutely amazing. Ample regard was given to the game’s graphics and the hard work and attention to detail really paid off.

Also, the game has an online feature that connects you to up to four other players for group contracts, so the community for this game not only has the potential to become quite large, but it’s well on its way, if not there already.

Lastly, the game can become quite addictive if you devote enough care into it. With over 250 quests, 70 Monsters, 700 different weapons, 1,400 pieces of armor, and a handful of different locales, for the type of game that it is, MHF2 has a lot going for it. And if it has the power to start drawing in a person that’s simply doing a review of the game, a person that doesn’t even really go for this branch of gaming, then there has to be some good things going on in this title.

If you’re up for an adventure, go pick up a copy of MHF2 and kiss your social life goodbye for a few months. I give it 4.5 Gems.