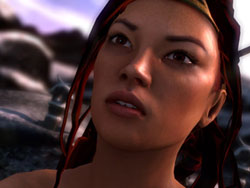 For those of you who own a PS3 and are still coming off the high brought on by repeatedly playing God of War II, you may want to pick up Heavenly Sword next time you’re at a game shop. This title is about as "epic fantasy" as they come, utilizing a superb storyline with some impressive fighting controls.

However, I mention God of War for a reason. Heavenly Sword is another riff on the type of slasher that has been popping up and catching the attention of gamers worldwide. And for good reason. When done properly, these games can provide hours of entertainment. (Note: Actually, this similarity to GoW was not lost on the developers, as you may discover if you keep your eyes peeled while in Bohan’s armory.)

In Heavenly Sword you play mainly as Nariko, a scantily-clad, redheaded warrior woman with a larger-than-life sword. If that’s not enough to lure you, there are also a few stages that give you the controls over her fairly simple, but no less lovable, adopted little sister Kai.

The story is set off when King Bohan’s quest for world conquest sets him on a collision course with Nariko’s clan, who happen to be the keepers of the Heavenly Sword.

The visuals of this game are top-notch. The bright and colorful world is just the right place to put bad guys flat on their backs.

There are essentially three versions of the heavenly sword you can use while attacking: one for speed, one for range, and one for power. There are combos that you unlock throughout the gameplay and you can pick up minor weapons (shields, boxes, people, ect.) and toss them around as you tear your way across each level.

This introduces one of the more interesting features about the gameplay, which comes with throwing, ricocheting, and shooting various projectiles. You’re able to influence the direction that the projectile moves by guiding it with the six axis points of the Playstation remote control. Pull up on the controller, the arrow goes up. Angle our controller to the right, the cannonball goes right. Once you get the hang of it, this type of added challenge in aiming becomes one of the most enjoyable aspects of the game.

As far as drawbacks go, the game is very short. The six chapters tend to go by in a flash on the easier modes, and there aren’t any extra features save for Hell Mode and a few featurettes that you can download directly from the Playstation store if so inclined.

The voice acting is decent and the puzzle elements are average.

What this game brings to the table is battle, like the one found in chapter five. Any game where a single character fights off an army of nearly 1,000 enemies on a single field has my attention. Add in an ancient-styled rocket launcher and I’ll be playing for hours.

Heavenly Sword is good in the gameplay category, very good as a matter of fact, but the lack of extras and levels just barely makes it worth my buck, as the replay value just isn’t there. Thanks to this major downfall, I say it’s probably good as a rental only.