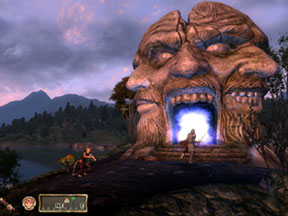 Oddly enough, the Shivering Isles expansion pack for Oblivion was delivered to me the day after I finally solved the main part of the game. After investing over 250 hours to playing (and going through the mini-Knights of the Nine expansion) I thought the addiction was finally broken.

But you see, there is trouble in Tamriel once again. And this time, the danger is a bit more subtle. Yet another portal has opened into Oblivion, but this time, there are not thousands of hungry creatures pouring out to wreck the beautiful cities around Cyrodiil. No, this time the portal sits unassumingly on a floating island in the middle of a river, and invites people to enter, but only if they wish.

When you arrive there (I am an Argonian so I love a good swim anyway) the first thing you will see is a mad adventurer come bolting out of the portal. He is quite crazy and attacks the (invincible crown character) Imperial trooper standing guard. After a quick fight, the trooper informs you that "those that go in there come back out – changed." Basically, they emerge crazy in one way or another. But the guard is there to warn people and fight those that come back intent on violence, not to stop anyone from entering. So you are free to go in if you wish.

Once you go in you are interviewed by a kindly gentleman and are told that you are about to enter the realm of madness, also known as the Realm of Sheogorath, after the mad god who rules there. You might have run into Sheogorath a little bit if you did all the shrine quests in the main game. I still had his awesome sword from one quest (which I found but never returned to him) in my inventory, but hoped he would not be too angry about that. It seems that Sheogorath himself is in some kind of trouble, and would like you to become his champion, if you can prove that you are worthy.

After accepting the challenge you are treated to a beautiful visual display that is one of the coolest effects in the entire game, and find yourself in a beautiful forest similar to those that grew in Morrowind. This was hardly the fire and lava I was expecting and in fact, the realm is quite beautiful. The sky at night with its pink and blue stars and amazing nebulae and orbiting planets is a sight to behold.

But you are not given full access to the realm just yet. You start inside a walled city known as Passwall. People who want to enter the realm go here first and a huge eight foot tall monster made of carved flesh prevents anyone from going any farther unless they are blessed by Sheogorath, or in other words, crazy. The gatekeeper is invincible and has the keys to the gates out of Passwall sewn up into its body. So it’s either slowly go mad, return to Tamriel, or find a way to kill the guardian. This first step is just one of many puzzles you will encounter within the new realm.

One of the coolest things you will notice is that everyone you meet in this new realm, and I do mean everyone, is touched by madness in one way or another. Some are obsessed about germs or catching colds, some think they are sick when they aren’t, some like to collect bones from graveyards because they say they talk to them, some are afraid to go outside their houses and a few are rather violent. It’s pretty neat to start talking to someone and slowly realize that, yes; they too are crazy in some way.

Of course just because they are crazy does not mean they don’t need things. There are many quests to be found in this new realm. Like the main game, you don’t have to march right up to Sheogorath and start completing the primary quest. I explored for many hours, doing my best to make the realm a better place, before I even set foot in the capital city where the lord lives.

The Realm of Sheogorath is about a third the size of the land of Cyrodiil which made up the main game. So it is pretty large. Most of the landscape is swampy and riddled with lakes and streams, which again, suited my Argonian character just fine.

One of the coolest aspects of the expansion pack is that the realm is divided in half. On the left side is Mania and the right is Dementia. The residents of the Mania half are creative, colorful and sometimes overly happy while the residents of Dementia are dark, depressed and foreboding. Either side can be suddenly and unexpectedly deadly, you just tend to expect it more in Dementia.

Even the landscape and the atmosphere follows this pattern. In Mania, you will be traveling through huge forests of trees set in a permanent autumn burst of brilliant color. The farther you journey on that side, the more outlandish the colors become. If you did the side quest mission in the main game where you got sucked into the painting, it kind of feels a little bit like that after awhile. Dementia is the opposite. The landscape is twisted and dark and all the colors muted. The entire landscape is awash in dark blues and muted greens, and a shadow seems cast upon you wherever you walk. The contrast between the two halves is amazing.

The realm is populated with lots of new monsters like living trees and a kind of orc-like swamp dwelling race. Dungeons are a mix of natural ones called root dungeons that twist and turn under the soil and abandoned cities made of crumbling stone much like the ruins you are probably used to exploring.

Once you get to the capital city, there are Smiths who can craft some of the most powerful weapons in the game for you, if you collect the right raw materials which is raw amber for one Smith and madness ore for the other. Even high level characters will find some awesome new equipment here.

The overall plot of Shivering Isles slowly comes to pass as you explore, though there is no need to rush it. There are plenty of cool things to find and explore, from a macabre museum, to hidden wilderness camps to just a lot of interesting objects hidden in unusual places, like the roofs of buildings that are difficult to find and explore. Expect at least 50 hours of new gameplay, which should delight any fans of the original Oblivion game. The expansion is currently available for the PC (click the link in the upper right of this page to buy it) or as a download for Xbox 360 owners. Hopefully it will make the jump to the PS3 soon as well.

For those of you expecting big things from the Shivering Isles based on your experiences with Oblivion, you won’t be disappointed. It earns another perfect score for a series that is raising the bar almost impossibly high for anyone else to catch up with.

Consider also reading our review of Oblivion for the PC and Xbox 360 right here. And if you want to learn about the Knights of the Nine expansion, which is included in the PS3 version of the game and can be bought for the PC and Xbox 360, we have that for you as well. The base game review for the PS3 can be found here.

Happy adventuring and blessings of the mad god upon you!