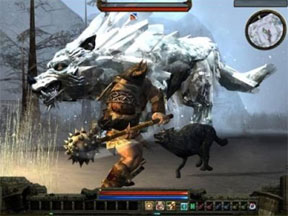 The gaming industry these days seems to be enamored with hack n’ slash Diablo clones. Loki is another recent entry into this genre. What separates Loki from other Diablo clones is that it adds a dash of God of War. You may think this works, and I would agree if only developer Cyanide actually decided to go fully down the God of War path and less the Diablo path. This hybrid lacks identity and ultimately delivers a lackluster experience.

Loki claims to be a non-linear action RPG that combines Aztec, Egyptian, Greek and Norse mythologies. The truth is this game is more linear than it leads on. Chain-quests are quite common. Most of the quests are typical chores that involve fetching or killing things. Being asked by a "healthy" town NPC to go out into the woods to acquire wolf meat serves no other purpose than to lead to another quest. You will literally ask yourself "why do *I* have to out into the woods and fetch wolf meat? Can’t you?"

But all is not so bad. Loki does a good job recycling interfaces from popular titles. The isometric perspective, akin to Diablo and StarCraft, will seem familiar for many. Those accustomed with World of Warcraft will recognize Loki’s interface. The radar and name of location sit in the upper-right corner while the bottom area is used for hotkey icons. Also customary is the inventory, character profile, quest log, and talents (a WOW feature that’s overtly copied in Loki with surprisingly good results). Uniformly, Loki’s interface is uncluttered so that anyone familiar with action RPG games can launch the game and start playing without reading the manual.

I would also like to laud Cyanide for offering player versus player action. I’ve read this service is really cool. You take you character, stats and all, online against other gamers. Unfortunately I’ve yet to experience it. Cyanide’s GameCenter software bans Yahoo e-mail accounts during registration. They also ban e-mail accounts from Hotmail and Gmail. I’m going to assume all other free web-based e-mail services have been banned as well. In retrospect I wonder how many actually play this online?

Here’s where things get tricky. This game is being billed as a premium title at $38 ($18 for our European friends; more or less elsewhere), as opposed to a $20 budget title. Charging this much for a game brings up several problems.

First and foremost my biggest complaint is the AI, which is absent in many areas. In too many places mobs literally run right into the path of your character’s weapon; one-hit killing themselves. And like lemmings they all seem to run the same path to their doom, never figuring out alternate routes or retreating to heal. In other situations mobs get caught by the terrain and they refuse to figure out a workable path to my character. This also occurs when caster mobs stay in one spot firing volleys that are constantly blocked by the environment. Instead of trying to reacquire a line-of-sight they vainly keep firing at the environment. Actually while reviewing I used one of these moments to make myself a sandwich, wash the dishes, and come back. My character was healthy and yes, those mobs were still unsuccessfully firing volleys from the same location.

Next, the graphics are old. There’s really no getting around this. I’ve seen enough of these clone titles to believe a paradigm exists among independent developers. A theory that suggests the bulk of their time is spent on environment design, while character design is almost completely forgotten. Case in point, at a maximum resolution of 1920 x 1200, Loki’s environments looks as good as any last generation graphics.

Both player characters and mobs are quite literally mixed bags. In the same screen a bear — that actually looks like a bear — will attack next to a bird that looks like a pterodactyl. The Odin guardian looks great. The Gnomes look good. The fire golem looks really nice with bonus points given for encasing your character in flames whenever he attacks one. In spite of these, town citizens look retched, wolves look bad, and a host of other issues exist. Then there are these indistinguishable Gnomish riders that might as well be moving blobs of blue and black for all I know.

My last complaint is the lack of fluid movement. Coming back to the God of War/Diablo comparison, what fails with this game is how you play your character. When you fight mobs you see that two-handed blade slashing the enemy into pools of splashed blood ala God of War style. The problem is you don’t feel it.

There’s this odd disconnect in that you really have no control how your character swings, where he/she swings, or even how much power he/she can dish out. You, the gamer, are literally reduced to nothing more than a keyboard-button masher. I know some of you are thinking, "well that’s what God of War is." I will agree with you, but the problem here, is that it doesn’t work. You see all this God of War potential wrapped around clucky controls.

Given the dire issues mentioned above it seems quaint to discuss audio and music now. I will say both are quite good. I should probably point out that the cinematic opener, while almost a dead ringer of those from Diablo II, is entertaining and actually well made. The bombastic track that plays during the opening menus sets the mood quite nicely. Throughout the game ambient sounds, such as howling winds and footsteps, play well with the subtle music.

But no one ever buys video games to listen to music and sounds. At this time I’m going to say pass on Loki, and not because of the out-dated graphics, or even the design, but because of the AI. The almost total lack of it in many areas makes this title little more than a coaster that doesn’t live up to its full potential, or price.

It could have been God of War, but instead it’s God of Mischief.