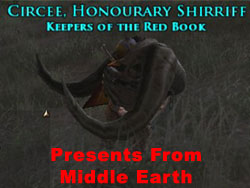 Those of you expecting to see Chella's beautiful face might be a little disappointed to learn that she is off for the holidays this week, so you are stuck with me. But don't worry. I'll make this fun, since I am writing about vacations, which hopefully many of you are enjoying for at least a few more days.

As background, normally every year the wife and I head somewhere fun, be it Niagara Falls or Las Vegas or wherever. But this year, due to extenuating circumstances, we were not able to really go anywhere, which leaves me with a lot of extra vacation days here at the end of the year. So I have been spending a virtual vacation of sorts online, mostly playing Turbine's new Lord of the Rings Online [LOTRO].

For those of you not familiar with the game, it's a way of bringing Tolkien's fantasy world (and to a lesser extent the movies) to life. You cleverly play a group of hobbits, dwarves, men and elves working behind the scenes doing the support work that helped the fellowship succeed in their quests. This way you get to feel like you are a part of the main story without really changing it in anyway. If you read the books, you know there must have been a heck of a lot going on behind the scenes, and that burden is your challenge. Though it's really more fun than a challenge.

As you might expect, in this job I am exposed to a lot of games and even a lot of massively multiplayer games. I played EverQuest II for about a year. Before that it was Asheron's Call. And before that it was Ultima Online. And there have been half a dozen forgettable MMOs between all them that lasted for a month here or there.

I dropped most of the MMOs in the past because I simply got bored with them. All the quests looked the same after a while and they were all a bit generic. Thankfully, I don't think LOTRO will head in that direction. In fact, I am feeling a bit guilty for playing with the press account they gave me for so long. I am thinking about asking them to turn it into a regular, pay by the month account, especially since they have an amazing holiday special where you can play the game for just $9.99 per month, one of the best values in the industry if you ask me. Besides having a ton of content to pull quests and stories from, basically the entire works of J.R.R. Tolkien, the developers have done an excellent job of trying to keep the game fresh and exciting.

Besides opening up new lands, they also added a really fun music system. You can either play the songs yourself using your keyboard or can download ABC notation to have your character play automatically. One person in our guild even composes music herself and then turns it into an ABC file so that all of us can play together using different instruments. We attract quite a crowd in Bree when we play on the Meneldor server, let me tell you. And we can play the A-team theme!

Another fine addition was player housing. And it was done in such a way that is different from other games. In past games housing was either "plop your house down in the game somewhere," leading to these great land rushes and miles of sprawl, or simply a portal that went to your "apartment in the ether." LOTRO implemented housing in a unique way where there is that gateway, keeping the houses from cluttering the landscape, but they actually go to real neighborhoods. Since my guild owns a house now, I get a discount on crafting and housing supplies when I shop at the local stores. It's nice walking around the neighborhood and meeting others that live there, though it might be cool if orcs invaded one day or something in a special event, leading all the denizens to rise to the occasion to defend the village. Nothing brings folks together like conflict (with someone else.)

The game also has periodic festivals with games like horse racing, tavern crawling and prizes that are mostly silly in nature, but overall are a lot of fun and add a sense of community to the game that was really lacking in other places I have played. Besides, what fun is being a hobbit if you can't be silly from time to time.

In fact, there are only a couple holiday wishes I have for the game, which I hope that the developers implement one day. My biggest annoyance is with the crafting system, which is really pretty generic. In fact, that generic aspect of all the other games I've played is only really evident in LOTRO when crafting. There just is not enough variety, so you end up crafting a lot of cookie-cutter weapons and armor that is being made by everyone else. It would be nice if you could add points into your weapons to modify them a bit based on your skill and the needs of your customers. So an expert arms maker could put, say, three points of extra defense into a dagger, perfect for a light armor character like a loremaster. Or an artisan arms maker (the next tier up) could add four points of fire damage to a two handed axe, making it great for offensive-minded champions. Anything would be better than collecting sapphire shards, smelting raw iron into high grade steel and killing animals to get sturdy hides, only to ultimately make the same generic Gondorian swords that are flooding the auction house for a couple silver a piece.

My other minor gripe is with housing items. I think every class should be able to make a house item. Again using my poor arms master as an example, why not let me craft a decorative sword to hang on the wall? Or a couple crossed axes that would look good over the fire? Our kinship house has lots of empty wall space, but there are only so many bookshelves to line it with before it starts looking, dare I say it, generic again. Also, please put more hooks in houses. Our great hall at the guild house is pretty empty because there are wide expanses where nothing can be placed. Again, some way to add variety to your home would go a long way.

But those are minor gripes in an otherwise perfect world. Really the game has only been around for seven months, so there is plenty of time for the developers to surprise us with more fun features in the future. Even now the game is so good that I can log in for an hour here and there, or play all night with friends and never run out of things to do.

Couple that with a very friendly community or players and stellar graphics that move between reality and storybook-like, and you have a real winner. If you have a few extra minutes this holiday season and want to try something new, I would definitely recommend LOTRO. There is currently a seven day trial offer where you can try the game out for free at www.lotro.com. And if you think that nothing good comes for free, think again. Turbine is giving you Middle Earth! My guess is after your seven days vacation there, you will want to become a permanent resident.

And say hello to Circee the hobbit if you happen to be on the Meneldor server. Happy Hobbit Days everyone!