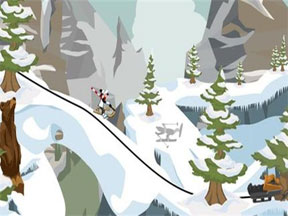 Wow. So, I apparently totally missed the boat on the Line Rider craze. Line Rider was originally a free Flash game (now also in Microsoft Silverlight) that was created in September 2006 by a Slovenian university student named Bostjan ÃƒË†adez. Line Rider 2 Unbound is the first commercial release of this physics game.

In Line Rider 2 Unbound you play as the sled rider Bosh. Bosh is dressed all in white and is obviously the good guy. In the cut scenes you are competing against Chaz who is dressed all in black and, in a road runner vs. coyote battle, he always fails in a funny way. There is also a love interest named Bailey that Chaz is trying to steal away from Bosh.

There are three modes of play. The first is Story Mode where you get the cut scenes I mentioned above and this is where new players (like I was) should start. After a fun little intro, you start on a map that shows a wintery backdrop with a starting point, an end point, and a track in the middle that is missing one section.

Covering the area of that section is a green box that you can draw in to complete the track. The controls you have are a pencil, curve tool, and eraser. In each of those sections you have a normal line, a speed line (Red), a break line (Yellow), and a trap line. My unpracticed hand was not steady enough for a manual draw using the pencil, so I used the curve line to connect the lines together and pushed the start button to send Bosh on his way.

Once I succeeded I was pushed on to the next puzzle which was more challenging and required that I change to a speed line. Eventually the puzzles get more challenging requiring the use of speed and brake lines and where the green box does not cover the entire gap and you need to plan on the right elevation for a jump.

Later on they add tokens to collect.

In Freestyle Mode–which is as I understand it the classic mode from the Internet–you are given a blank slate where you can design massive tracks for Bosh to try out. Or you can create your own puzzles like the ones from story mode in Puzzle Creation Mode. Once you have completed your masterpiece you can upload your work to www.linerider.com using the Content Sharing option and to share your work with other Line Rider fans.

In the later two modes the options increase to include new lines like trampoline or breakable lines. There are also options to create your own backgrounds and to change the backdrop from day to night and test out the track among other options available.

In the end I am not to sure about Line Rider 2: Unbound for the Wii.

My wife and I both enjoyed the story mode. But while my wife really liked the other modes, I did not. But then she is a lot more creative then I am and I think that is what those modes really take.

My concern is the steady hand required to do some of the really cool stuff. I think I would do better on the PC using the mouse.

The different prices may also drive people to the PC version which is at $20, while the Wii version is $30. Both versions can be bought right here from the Amazon link at the top of the page. And if you are creative by nature, you might give it a try. There is after all, no need to stay between the lines here.