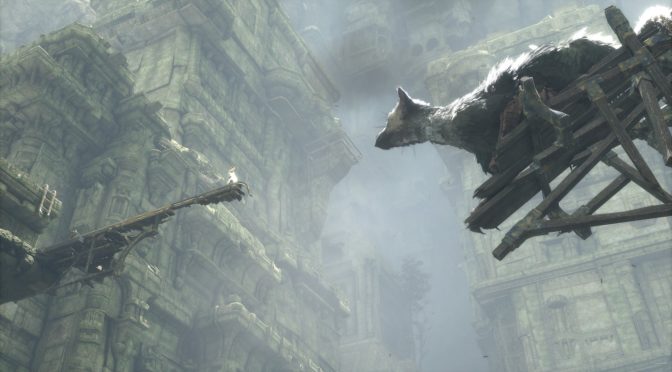 When a game hits the 10-year mark in development, it usually spells disaster. The Last Guardian has been a long time coming, but fans of Team Ico’s special brand of fantasy games never gave up hope. And now that we finally get to play as a boy and his griffin-type companion, we’re left with a game that’s both stunning, frustrating and memorable. It’s not a complete disaster, but it’s not a total triumph either.

As the boy, you wake up on the floor of a crumbling castle, next to a chained beast, which roars, sending you tumbling backwards, every time you try to get near. It’s clearly in distress and you want to help it. This is how The Last Guardian begins.

It’s a fairy tale and a fable of sorts, which examines how treating fear and anger with love and kindness can forge bonds that bridge divides. It’s a story worth telling in what, for many, has seemed like a catastrophic 2016. And it’s the companionship between the boy and the creature, Trico, that makes me wish this game was as perfect as the story it conveys.

In order to placate the Trico, the boy has to search for barrels, which contain an energy-giving elixir that recharges its energy. After freeing the creature, a bond is formed and you work together for the rest of the game to escape this crumbling fortress, buried deep among the mountains.

With a common goal, you set out, traversing soaring towers, iron gates and decaying stone bridges. The mysterious castle has clear echoes of Ico and the giant creature will remind fans of Shadow of Colossus, the spiritual predecessors to Fumito Ueda’s latest vision The Last Guardian. That said, it’s not a repeat of those games.

Cleverly, The Last Guardian flips the power dynamic of Ico on its head. In the first of the trilogy, the boy brandished a sword and protected Yorda, the ghostly girl, who was being pulled through a gateway by shadowy attackers. In this game, the boy has no weapon and he is the one being protected from armoured attackers who are trying to carry him through strange doorways. If they succeed it’s game over, but the creature attacks the kidnappers and routinely saves the boy from this fate.

The game is breathtaking to look at. It’s clear that it was developed for PS3 and has made its way to PS4, but that doesn’t detract from the misty, watercolour beauty of it all. The sense of scale, the over saturated lighting and the decaying beauty are all hallmarks of Ueda’s style and his new studio genDesign (formed when he left Team Ico, which is now part of SIE Studio Japan).

I never tired of watching this small boy stumble up cracked staircases, clinging to the outside of stone towers, the wind tugging at his tunic. These are the moments you savour in an Ueda game. But the creature just adds to the whole thing.

For  the opening sections of the game, the boy runs ahead and you must solve puzzles to open the gates and allow the creature to follow you.  But as the trust between you grows, the creature takes the lead, leaping huge sections to help you both progress. It will stand on its hind legs, allowing the boy to reach higher ledges and can even shoot lightning from its tail, when the boy has a certain item in its possession.

The beast, Trico, is a feathered amalgam of cat, rat and bird and its behaviour is beautifully animated. It’s endearing to see it wait attentively, head cocked on one side, tracking you as you climb a wall. And then, cat-like it paws gingerly at a chain or a barrel, chin tucked into chest. Or the way it crouches, thinking carefully before performing a jump or rolls playfully in a puddle before shaking water from its feathers. In the quiet moments you can pet the creature, nuzzling its nose or its neck to calm it after a fight or just because you want to. And every time you do, it melts your heart.

Later in the game, the boy can issue commands to Trico and this is where it all takes a turn for the frustrating. This is where the beast’s feline tendencies really come to the fore. At times I spent upwards of 10 minutes trying to get the thing to jump. I could see where we needed to go, but it just looked at me quizzically. And then I began to doubt myself and looked for other paths or solutions, wasting yet more time.

Many are saying this is part of the genius of The Last Guardian – the fact that the creature has a mind of its own. I suspect a case of the emperor’s new clothes. If I’m telling Trico to jump forward, but it turns around and tries to jump in thin air, I think it’s fair to assume it’s not clever AI and storytelling, but an issue with the controls.

There were just too many of these moments, where the beast failed to get what I was trying to do, but then suddenly burst into action. If this was a design decision, it’s a puzzling one because it just leaves you shouting at the screen and tearing your hair out in the hope of progressing along what you know is the right path.

The Last Guardian also suffers from dodgy camera moments, which is no surprise for a Tomb Raider style puzzler like this. However, something as simple as getting on and off the beast can be a trial. If you’re climbing down, but the creature moves, then you can end up just going in circles or creeping around its belly, obscured by feathers. There were so many times I was trying to jump off and finished upside down, hanging of its eyebrow. Another cause of frustration, but one I could forgive.

It’s hard to forgive the crazy physics of the barrels, though. Thankfully, you don’t have many barrel puzzles, but the memory is still raw. Sometimes the creature is exhausted and lies down. This means it’s time to go barrel hunting, so you can feed it with the liquid inside.

Someone at genDesign thought it would be good to make a gameplay challenge with the barrels. One task sees you find a barrel underground, and having to throw it up a path of derelict masonry. Simple enough, perhaps. Only, the barrels twitch like Mexican jumping beans, bouncing back to the bottom. In addition, because the boy is small and the barrels are large, he heaves them in a diagonal, making it really hard to aim. In short, more shouting at the screen.

These moments of crushing frustration are almost always followed by soaring high points. Clinging to the back of Trico as he navigates across a series of towering columns, scrabbling at tumbling stonework to get you to safety. They’re breathtaking and exhilarating set pieces that make all the barrel bouncing a fading memory.

The level design, although there aren’t clear levels, is superb. You can look out from one tower and see where you’ve come from, giving a really strong sense that this is a real world, even though you’re clinging to the back of a griffin-cat-rat that shoots lightning out of its tail. The sense of a culture and lore permeates every crevice of the tower and the strange tattoos on the boy, as well as the boy himself, as the story is revealed.

It’s a shame that the controls get in the way of enjoying this touching story. As the game progresses, you feel a stronger and stronger bond between the boy and Trico. Reaching the final levels, the number of foes increase and Trico’s feathers become tattered and stained with blood and it’s heart-wrenching. After battles, quiet moments allow the boy to remove the spears and offer comforting words to Trico before you press on.

The Last Guardian was worth the wait, but it’s also slightly disappointing because the clunky controls mar an otherwise beautiful story. Play this game to marvel at the stunning castle and it’s weird mechanical puzzles. And play it to experience a growing bond between these two characters. And then sigh a little at the end, when you know you’ll miss the sun bleached vistas and the wind on a high tower, but you won’t miss those bloody barrels.

This is a game that I enjoyed in spite of the controls, because when it’s good it’s glorious and captivating.