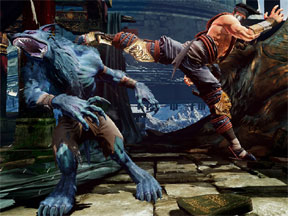 Well, here it is, my first Xbox One game review, and go figure, the game I am reviewing is the one that made me want to get an Xbox One in the first place. Killer Instinct is a game series that always holds a special place in my heart, as I remember having to drive all the way up to Pittsburgh to play the first game in the arcades, at least until my college campus finally got it in, just in time for Killer Instinct 2.

And I can never forget when I got my Nintendo 64 just to play Killer Instinct 2, or in this case, Killer Instinct Gold. After Gold, I wasn’t sure if KI would ever come back, and had hope when Rare announced they would become a Microsoft second party, but after many years and hints of KI3, I started to wonder if it would ever come out. I even had a discussion with Stuttering Craig from ScrewAttack on whether or not it would be a reality, and he too didn’t think it would happen.

That was, until E3…and one of the few highlights of a rather disastrous Xbox One unveiling was a revival of Killer Instinct, but what I heard about the game’s release caused me a lot of concern. For starters, it was said that Rare would not directly be involved with the game, but rather Double Helix Games, a company known for some poor titles in the past. Second, the game would follow what I originally thought would be a freemium model, which I have seen done on mobile games to varying levels of success and frustration.

Fortunately since those announcements, I have watched a lot of trailers and gameplay footage, be it from Evo 2013 or streams from Twitch users such as Miles923, and the more I’ve saw of the game, the more it got me interested again.

And then, I played it at MAGFest. Yes, I finally was able to sit down and get my hands dirty with a game 20 years in the making, along with some other members of ScrewAttack, and after the event was over, I was instantly hooked! And yes, just like Tekken 3 did with the original PlayStation, Killer Instinct was so good as it is, it made me buy an Xbox One!

Anyone familiar with Killer Instinct knows how the fighting system works, as it’s the same six button configuration used in the Street Fighter series (aside from MvC3.) But the center of the game is based on combos, starting off with an opener attack, followed by a linker, and then you perform another attack, and finish with an ender. That same formula returns in the latest KI. In addition, the Combo breakers, moves that actually stop a combo altogether have returned, however in the new KI you still get credit for the combo before it was broken. However, even these once unbeatable moves can now be stopped with a Counter Breaker, allowing the original combo to continue to outrageous levels.

There are also Shadow Counters that are performed by a more powerful version of your characters special moves (with two buttons as opposed to one.) Another new feature is called Instinct Mode which gives each character a special skill of their own. For instance, Glacius’ Instinct can absorb up to 5 hits, while Jago’s allow him to restore health when attacking.

And then, yes, there are the Ultra Combos, where a single move can dish upwards of 20-plus hits as a finisher. But with the new KI, there are Ultra Enders, a modified finishing move that delivers a punishing blow to end the Ultra early, and the Multiple Ultras. Activating Instinct Mode during an Ultra can resume the combo and lead into another Ultra finisher. As a result, combos ended up getting over 250 hits!

Thankfully the basis of an excellent fighting game are in place, because the way it is, the game is still a work in progress. As of right now, there are only seven characters to choose from, which is very small for a game like this. At the time of this review, Spinal was made available for download, and Fulgore will be available in March.

And that brings me to what I once called the "freemium" model of the game. The game itself is free to download, and will allow the playing of one character. While it initially was Jago that can be played, it has since cycled to the other players, with Orchid being the most recent. Other characters can be purchased for $5 each, but there are two bundle units that would be the better value.

The first is the Combo Breaker Pack, valued at $20. This pack includes all eight characters, including Fulgore when he is released. There is also a $40 Ultra Edition that features the eight characters from the Combo Breaker Pack, but will include costumes and accessories, and what I feel is the real reason to get the Ultra Edition, the inclusion of the original 1994 Killer Instinct!

Killer Instinct was ahead of its time when it came to visuals and sound back in 1994. I remember how impressed I was with the particle effects, but they are nothing compared to what the Xbox One version can do. Jago’s fireballs, which just shot out a few particles on Ultra 64 technology has been replaced by a near non-stop rain of effects, and I can’t say just how impressive it is seeing ice parts falling from Glacius when using his ranged attacks.

And there is the amazing soundtrack composed by Mick Gordon. Rather than just going through the standard fighting game music fare, KI’s soundtrack changes constantly throughout a match, getting more intense as higher combos are obtained. Even Ultra Combos have their own musical style based on each player. It is an amazing level of detail that I never saw coming and I’m glad to see it paid off.

Needless to say, Double Helix Games heard all the criticism, and all the feedback, and even after the harsh (and wrongfully undeserved) backlash they came through and made one of the most enjoyable fighting games I played in recent years. Yes, it’s not complete, but I can only imagine how it would be when it is, and if there is a Season 2 on the way, I will definitely be joining in!

Pros: The source game is FREE! Not only that, but it is a fun brawler and very close to the Nintendo original. Combo Breakers can finally be countered! Ultras can now be doubled, or worse! That awesome dynamic soundtrack! Gorgeous, especially the particle effects.

Cons: Only one character is available for free, though it cycles between characters. Can be considered a beta as it’s still bringing in more characters and modes.