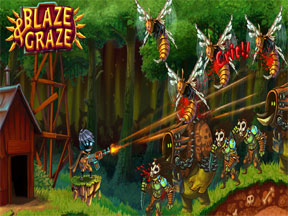 Blaze&Graze! is a unique 2D distance runner game. The main goal is for the runner to travel a high distance. The player starts out on a floating platform with a staff that shoots fireballs and has to shoot enemies that are in your path. If the enemy hits you, the game is over. Created by Rodiola Studios and Wyse Games, it’s out exclusively for the iOS, and was released in December.

In addition to the enemies, coins are floating in the sky attached to balloons and can be collected throughout by shooting them. If the player dies, coins can be used to revive the character and continue on. Different characters, weapons and platforms can be purchased with the coins that are collected. Each has its own special abilities.

There are also missions to complete. For example, when you collect a certain number of coins and complete the mission, you are awarded with a star. Collecting these stars will level up your character.

The characters in the game look like they came out of a fantasy story. Enemies vary. Ogres, knights and wasps are a few of the enemies you will encounter. Some enemies are armored which makes them more difficult to shoot down. Along with the enemies, there are a variety of weapons from a staff that shoots fireballs to an AK-47.

The controls are simple, which makes it easy to get the hang of playing right away. Holding on the left side of the screen will make your weapon shoot and sliding up and down will aim your weapon. Each character has its own button to press for its special abilities. The weapons can overheat, to cool them down, just stop shooting.

If you don’t want to take the time to collect coins through gameplay, you can purchase packs from the App Store to obtain tons of coins. The game has the ability to connect to the Game Center for the leaderboard to check out the top scores. Want to be number one? You can look and see what the score is that you have to beat.

The only thing that would make this game even better is if when you level up to a certain level, the characters, weapons or platforms were discounted for purchase with your coins. Other than that, the gameplay won’t let you down. It’s addictive, fun and overall a great game. Blaze&Graze! for the iOS gets earns 4.5 GiN Gems.